I was looking at the weddings section of the NY Times yesterday morning when I stumbled across this couple, Andrew Borchini (on the left), and John Scott Johnson: 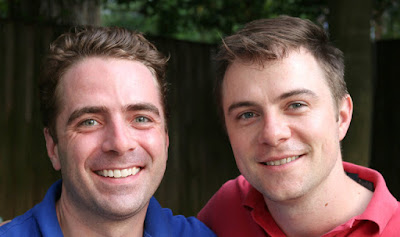 The fellow on the left is wearing an expression that you simply never see on straight guys. It seems to say "I'm just overjoyed to be here!" and "It's so incredibly wonderful to see you!" He seems to have a wellspring of deep inner bliss, and his bedrock assumption about the world appears to be, "It's filled with amazing people and it's just so great to be alive!"

Mr. Borchini looks like a genuinely nice person -- I'm not being sarcastic here -- the kind it would be pleasant to be around. He looks reasonable, accommodating, and gracious. (I'm also guessing -- obviously, everything I'm saying here is purely a guess -- that he might be just a touch naive.)

It's an expression you occasionally see at parties, maybe after someone has had a drink or two. 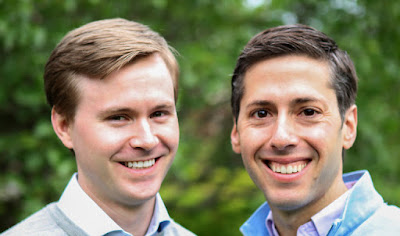 I was struck by Adam Scott's similar expression. Again, I know nothing about him, but he seems to exhibit similar qualities to Mr. Borchini.

Six years ago I said that the gay men I saw at Club Med seemed to come in "four main flavors." I'm guessing that Andrew Borchini and Adam Scott would fall into the "extremely helpful" category.

Here's what I said about that type at the time:

The third flavor might be described as "extremely helpful." It's impossible not to find these guys pleasant to be around. They're always cheerful, always polite, always friendly, and always understanding. While they tend to be a little effeminate, they're not drama queens or weird like transvestites. They're just....nice. They remind me of the vivacious hostess at a suburban party who's always making sure everyone is comfortable and has a fresh drink: a little phony maybe, but hard not to like.

I salute Mr. Borchini and Mr. Scott. The world definitely needs more people who are both better-natured and less critical than I am.
Posted by John Craig at 5:38 AM

There's a guy who blogs as "Akino Kure" who has written extensively on gayface and gays in general. He'd call Christopher Beacham smile the "I'm a little stinker"-smie.

Anon -
Thanks, that was interesting. The surprised look with raised eyebrows DOES seem to be a gay thing. But I don't think of it as infantilized so much as just feminine: a certain type reminds me of vivacious housewives more than they do children. Saying they have a Peter Pan quality, though, also seems right.

A few years ago, before I was reading blogs like this, I used to think gay guys had a certain look on their face I couldn't put my finger on. They might not be overly feminine but they looked gay. Some of them at least. I wasn't sure if it was some underlying biological thing or a subtle muscular thing from gay expressions.

I never thought of this particular expression but I've definitely seen that eyes lit up look before on gay guys, often quite effeminate ones.

Steven --
For that set of guys, who wear that expression, the word "gay" in its original meaning does not seem like a misnomer. Take a look at that link from the first commenter, that description seems on target.

Akino Kure is a despicable person, and is wrong about many things, but his work on homosexual male expressions and character is really well done. It would be interesting, John, to see you pursue that issue without Akino's wounded fervency--you could probably offer a more comprehensive perspective.

High Arka --
The link above was the first I'd ever heard of Akino Kure.

Thank you; if more stuff occurs to me, I'll point it out, but I'm not sure it will. I find homosexuals -- and the differences between them and heterosexuals -- interesting, but they're not quite an obsession with me. And I can't willfully MAKE something an obsession, those just happen. (Mine are obviously sociopathy and race, as well as a few others I don't talk about on the blog.)

Yours are the Chosen, how a handful of people can manipulate the masses, and the intersection between business -- especially big business -- and life. Think about how you arrived at those; it wasn't a conscious process, it just happened. And those are the prisms through which you view the world. (And because your thoughts tend to revolve more around those topics, and you have a high IQ, you understand them far better than most.)

It's sort of the same with me. An example: competitive swimming has been sort of an obsession with me, and one of the first things I'd think of when I met someone new was, did they or did they not have a good body for swimming. Even back then I knew how silly it was, but it didn't stop me from judging them that way, the thought would jus pop into my head unbidden.

These days I'm more likely to see someone in terms of their inhibitions, and where they stand on the sociopathy scale. (But if I see a particularly good swimming body, that will still occur to me too.)

The outside world tends to view people with obsessions as slightly mad, and they may have a point. But if you recognize that something is an obsession (or, as most of us prefer to think of it, as an "interest" and ourselves as "buffs" or "aficionados") and don't let it cloud your judgment, you can gain insights others don't. As you know.

But anyway, thank you.

In my circles we describe Gay Face with the term

It's a visceral indicator more than an analytical one. It ententacles the intersection between Feminized, Submissive, Precious, Manipulative, and Vewwy Vewwy Speshul Coz Victim.

I will admit to homophobia. In my book, gays are like other guys' dicks. I know they exist, but I don't want them waved in my face or shoved down my throat. I used to be more tolerant, but one encounter with the Folsom Street Fair changed all that.

"Homophobia" itself is a misleading term, as I wrote about here:

Its the massive jaw that tends to stick out.

People saying they are "overwhelmingly" happy are confusing the nickname they gave themselves ,"gay", with the original adjective and reading too much into the picture. My ex was best friends with two gays and they might smile like that in a picture but their predominate state was bitchy and whiney. Not overwhelmingly happy

Anon --
Maybe I'm the one who read too much into that picture (literally). Then again, there does seem to be a certain strain of gay who's alway helpful, always cheery, as I described in the post.

To lend Anon some support (and to engage in a lot of generalizing), that's the attitude reserved for outsiders. The super-happy thing does not occur in private (except in ZOG movies), but is cultivated in order to make people think their inner lives are like that. My anecdotal experience matches Anon's, in that homosexual men will display that cartoonishly happy behavior while they're on the clock, then slip into horrible vindictive melancholy when they can't keep up the front anymore.

High Arka --
Hmm. I have to admit, most of my experience with homosexuals is relatively superficial. I've found them to be pleasant and sometimes even engaging in conversation, but I can't say I've hung out with them a whole lot off the clock. I guess what you're saying is that their personas are a lot like teenage girls' when those girls are dealing with older people: unfailingly cheerful and unfailingly fake.

But now you've got me thinking something else: what else is this blog but horrible vindictive melancholy (mixed with vindictive anger)? So, I can't really talk. And I don't ever even bother to do the fake cheery thing in person. Does that make me a better person than them? Honestly, I don't think so. The fake cheery thing may be fake, but it's also cheery, and frankly, probably more pleasant to be around than someone like me. (My personal theory is that every time you have to fake a laugh, it takes five minutes off your life. So, since I want to live forever, I never do, thus forcing others to feel as lame as they are. Is that nice? Of course not.)