The typical New York Times reader dismisses the New York Post as a tabloid which caters to people's basest instincts -- which is precisely why I prefer the Post. My baseness, and the Post's more commonsensical editorial section. (And make no mistake, the editorializing in both newspapers extends to their decisions about which news to put on the front page.)

You're certainly going to learn a lot more about human nature by reading a "lurid, sensationalistic" paper like the Post than you are by reading the Times, which has downright Victorian sensibilities when it comes to describing human nature as it really is.

Aaron Hernandez has recently been in the Post quite frequently, for his double murder trial, his jailhouse fights, his suicide, his gay prison fling, his financial status, and so on. He was pretty much trouble personified.

And every time I would see a picture of Hernandez -- 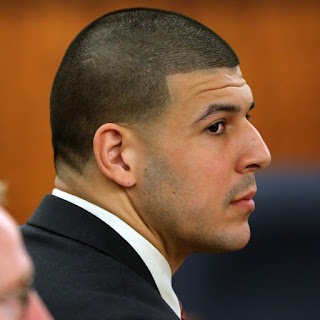 -- I would be struck by his low hairline. It was hard to escape the conclusion that that low forehead, coupled with his high testosterone (he was 6' 2", 235, and a professional football player) made Hernandez's life of violence seem almost preordained.

Two days ago the Post had an article about the Phoenix serial killer having been caught, and ran this picture of him: 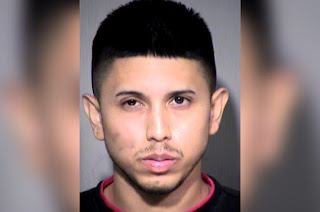 His name, coincidentally, is Aaron Juan Saucedo. For a period of about five months, between March and July of 2016, he terrorized a mostly Hispanic neighborhood in Phoenix by randomly shooting people after dark.

It's my vague impression that about half the time I see a photograph of someone with such a strikingly low hairline, it's in connection with a violent crime.

I realize I'm not dealing with a lot of data points here. And I'm sure there are more people with such low foreheads who are not murderers than who are.

Nonetheless, there does seem to be a correlation.

The only other conclusion I could come to is that you should beware of people named Aaron.
Posted by John Craig at 9:16 AM

My impression is that the low hairline is a trait of some ethnic groups: North African Arabs, Amerindian Hispanics, and Sicilians. These same groups have produced some notorious criminals:

Mark --
True, it does seem to be correlated with ethnicity. And it certainly doesn't denote criminality per se. Your comment just reminded me that Ronald Reagan had a low hairline too. (I remember the media at the time referring to it as the "eunuch's hairline.")

Aaron Hernandez was half Italian and half Puerto Rican. I have no idea if his Italian half was Sicilian, or exactly what went into his Puerto Rican ancestry (they tend to come in a full range of colors).

all people named "Aaron" are over-represented everywhere, because of the ABUSIVE ALPHABETICALISM...just like the THE AARDVARK, a stupid and obscure animal who would never come into the story if not for his alphabetical primacy...how often do we mention the aardvark while ignoring THE LEAF DEER, THE OLINGUITO, THE HOATZIN, THE ECHIDNA, and THE PANGOLIN??

(I feel guilty about slighting those nice other animals too...also THE TAYRA and THE PITOHUI are very deserving, as well...the pitohui is an actual POISONOUS BIRD, yet gets no press)

but yeah, there are plenty of serial killers named "Zebulon" but by the time you get that far down the list, you have already lost interest in the whole project...time for a nap and a snack...

Low-set ears seems to be another trait that keeps cropping up (look at the pictures above). I'm not sure whether low-set ears is more related to low IQ though than criminality; women with Turner's syndrome typically have low-set ears, but I've never heard of any criminal with TS. From my experience of meeting them, people with Turner's tend to be friendly - as are people with Down's. Low-set ears are common in people with DiGeorge, Down and Edwards syndrome and, although I can't reference it, I've seen more low-IQ people IRL (without any diagnosed intellectual disability) with low-set ears than I've seen intelligent people with that. The plural of anecdote isn't data though, so it would be interesting if a proper study could be done on this. The only things I can find online are about intellectual disabilities, not any link between low-IQ and low-set ears generally.

Wow, that was an education. I'd never heard of the olinguito, the hoatzin, the tayra, or the pitohui, and just looked them all up. Some of them are pretty cute, even if you wouldn't necessarily want to be in a telephone booth with them.

Gethin --
I'm really getting educated this morning. I wasn't familiar with Turner Syndrome until you just mentioned it and I looked it up. And honestly, I've never noticed a correlation between the setting of the ears and IQ. And I'm not even sure I agree that Hernandez's ears are low, they look fairly normally set to me. The other guy, yes, his ears seem a bit low. And his face is a little off, somehow, in a way I'd associate with a low IQ. (Which I also tend to associate low hairlines with.) In the past, countless novelists have described thugs as having low hairlines, or low foreheads, which is the same thing, in an attempt to make them seem more primitive and brutish.

It's not about the hairline, it's about what's right beneath it. The pre-frontal cortex is in the forward part of the brain and contains almost all higher functions: abstract thinking, math, and the conscience.

Phrenology is thrown out as a "pseudo-science" rather than a flawed science. Part of why it reached wrong conclusions is because the researchers greatly underestimated the intelligence of East Asians. This led them in a false direction. When you look at the Central African forehead, they are missing the front-most part of their brain. This has been confirmed by both behavioral observations and MRIs.

Because of his PCP addiction, Aaron Hernandez makes for about the worst possible test case. None the less, there might be something to this.

Anon --
You're right, of course. The brain is the only thing that matters; and the prefrontal cortex as you say, is all-important. But somehow that hairline is such an obvious and dramatic feature, and it too seems to correlate with behavior, so I just thought i'd point it out. If you look carefully at Hernandez's head, it's also obvious that his brain pain isn't all that large in relation to his face.

Anonymous --
Ha, another good example. Thank you. I had read about the incident, but hadn't seen his picture till you just sent it.

There was research in the field of Sociology prior to the 1970's that produced a type of Sociology called Postive Criminality. That group created and wrote about what they labed the "Normal Primitive". This field of study identified certain genetic traits common among various ethnic groups. Some of the characteristics of a "normal primitive" were low forehead, flat back of head,etc. and such characteristics were correlated with higher instance of violent crime.There were public outcries as research was viewed as racist and the entire field of study was banned. I learned about this is Sociology class yrs. Ago in college and have yet to find any reference to it since, at least on the Internet.

CVP --
Not surprising. There's virtually no mention of race and IQ in the media anymore either. It's as if there's no such subject. In fact, the subject is considered so radioactive that the heritability of IQ within a race is not even a topic that ever comes up.

The traits you mention, "low forehead" and "flat back of head," tend to correlate with smaller brain sizes, and brain size correlates with IQ (there's supposed to be roughly a .3 or .4 correlation), so that relationship with violent crime is not surprising.