Three posts ago I defended Kathy Griffin and her right to make offensive images, especially in the service of comedy. But after the strong reaction against the photo of her holding up a bloody replica of Donald Trump's head, Griffin herself seemed to lose her sense of humor.

Yesterday she held a self-pitying press conference in which she tearfully accused Trump of being a "bully," and said he was out to ruin her life. (He put out exactly one Tweet in which he said she should be ashamed of herself and that his son Barron was having a hard time dealing with the image.)

Which is worse, the photo or the responding Tweet?

I still think Griffin is a funny comedienne, but at this point it's hard to have any respect for her.

Two months ago I wrote a positive review of Dave Chapelle's Netflix special. I said that I had half-expected that his having gone on steroids would cause him to lose his sense of humor, but it hadn't.

Last night I watched Part II of the special. It wasn't quite as funny. Worse, I heard the steroids talking throughout. At one point Chapelle said that he had knocked on the window of a car containing four white boys, one of whom had thrown a snowball at him, because he wanted to "fuck them up."

On another occasion, he said that there was only one parent at his son's private school he might not be able to take in a fight (a certain lesbian). And throughout the show he talked like a guy who thought about nothing but sex (a common side effect of steroids). 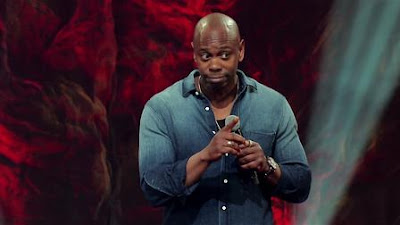 Chapelle is now a hulking presence, but the pre-steroids Chapelle -- who must have weighed roughly 135 -- would never have talked this way. Hearing him trying to sound like a badass with his new store-bought muscles was a little off-putting.

One of the themes of his show was how hard it is to be black. Chapelle had a couple of legitimate complaints -- in one, a member of the audience in Santa Fe had thrown a banana peel at him. (That actually happened, I looked it up later.) And, one of the boys in that car had called him the n-word.

The fact that Chapelle could make comedy out of this material, and not even sound angry while speaking about the incidents, is admirable. But I feel as if I hear enough about how hard it is to be black; it's hardly breaking fresh comedic (or political) ground. And some of the stuff he alluded to, including his unquestioning acceptance of the myth that the police are out to kill black people, was tiresome.

I preferred his politically incorrect analysis about the inherent awkwardness and difficulty of trying to address everybody by the right pronoun in our newly gender-fluid society.

Chapelle's great strength has always been his ability to be the voice of sanity while describing crazy situations. But he's starting to sound as if the steroids are pushing him in the other direction.

I still think Chapelle is a great comedian. I'm just a little bit less of a fan than before.
Posted by John Craig at 11:30 AM

Kathy Griffin’s worst mistake is that she is guilty of Islamic cultural appropriation.

RAQQA, Syria — The self-proclaimed Islamic State has issued a statement condemning self-proclaimed comedian Kathy Griffin, accusing her of “cultural appropriation” after she posed for a photograph with a mock severed head of President Donald Trump. The group, which has been protective of its brand ever since taking over vast swaths of Iraq and Syria and establishing itself as the premier beheading agency in the Middle East, said it was deeply disturbed by Griffin’s “ignorant and offensive” use of a “sacred Islamic State tradition.”

“This is just another example of a privileged white woman culturally appropriating the proud custom of a marginalized people. Beheadings are our thing, not your thing,” said the statement

Anon --
Ha, for the first paragraph I wasn't sure if you were serious, then looked it up. The Duffelblog is great.

A lot of commenters on another website are very anti-Kathy Griffin. More than a few stated that she's just like Hillary, blaming everyone but herself for the mess that she's in. I agree. She lacks remorse and shame over her antics. I personally question if she herself is disordered.

Susan --
Well I stuck up for her a couple days ago but I have to admit, she came across terribly at that press conference. And saying that Trump was bullying her when all he did was respond to her picture was ridiculous. And all that self-pity, yikes. I'm wondering now too.

About gendered pronouns, the problem is the insistence when it comes to third person pronouns. You have to force every to say xe, schlee, or zee when referring to you, and what can you do when they aren't in your presence? You will have to pass discrimination laws to force people in public to use the correct one you want.
In a language like Thai or Japanese, there are multiple 1st person and 2nd person pronouns, and the third person ones either don't exist or are gender neutral (mostly saying "that person" is the case).
In this case, you are free to use whatever you want to refer to yourself, and 2nd person ones are based on the speakers own gender, not the person addressed. It's more manly in Japanese to say "omae" for you while a female may use "anta". It's your right to decide how to refer to yourself, forcing others is a problem and not really a right (though It annoys me when people use "it" to refer to someone who is transgendered or disabled not because of morality but because they person saying that tends to be immature or trying to sound edgy or deliberately cruel appearing without the force of a natural brute, which is pathetic. A person who is opposed to transgenderedism for legitimate reasons usually would just use the pronoun for the biological birth sex.

As for disabled people, it just pisses me off when I hear stuff like "not fully human", "that's not a human, thats a tard/cripple/robot/thing", not because i am morally outraged, it just sounds like the person is trying too hard or thinks they are so brave for doing that, they think they are edgy and expect others to think they are going against the norm of being too politically correct when they are trying to replace it with their own political correctness.

I can't explain what I mean, but in both cases, it is also is annoying they keep insisting on using "it" in those cases like they are forcing others to do the same when it's also third person pronoun forced inconveniencing crap in its own way. I mean, we already know how the person feels, so stop doing your own insisting, geez. It's a type of political correctness in a way, if we are to ignore biological sex organs and cellular regeneration in favor of using a pronoun for an inanimate entity, then that is also going against biology too in favor of feelings.

Ga --
When people are rude and call someone a 'tard or something like that, its not another form of political correctness. It's just being rude, and maybe partly a reaction against political correctness. I'd liken the two incidents that Chapelle described to this. There's no excuse for throwing a banana peel on stage, nor for calling him the n-word. But some of the impetus for doing this has to come from the way whites are expected to tiptoe around blacks these days and take great care not to offend them, while blacks don't have the same sorts of unwritten rules governing their behavior. Resenting a double standard is only natural, though that sort of rudeness is never welcome.

It did occur to me that Chapelle focused on these two incidents of what amounts to bad manners on the parts of whites, while in the meantime blacks go around killing and raping and committing assault and armed robbery at a rate eight to ten times higher than whites.....and somehow that doesn't seem to make it into Chapelle's comedy. But, those two incidents DID happen to Chapelle, and his comedy has always been about incidents in his life, and he's always (well, almost always) been funny, and that's all we can really ask of a comedian.

Imagine a gigantic snake that is invulnerable to any physical attack, every time you cut off it's head it just grows back, every part you strike off heals instantly.

What to do? Build a gigantic concrete box and force it in and close it up, then wait for it to starve to death.

Maybe if everyone just ignores politically correct propagandists, boycott their crap, let them starve instead of trying to go after them. Starve them. Then political correctness will end, and as an added benefit, the rude backlash with die off too.

This is not at all gonna happen, so do you have a better idea?

Ga --
I think it will eventually die of its own ridiculousness. The truth has a way of emerging, eventually. And a little bit of mockery doesn't hurt.

But what about the internet's dysgenic effect on information? Or am I overestimating it's significance?

Ga --
I don't think the internet has a dysgenic effect on information. It allows non-politically correct information out there, which is tremendously liberating to those who were sick of the NY Times et al having a stranglehold on the information that got out there. It's reassuring to find that others think as you do, and not as the times editorial writers tell us we should be thinking.

Ah, but there needs to be conflict to allow natural selection to take place and allow ideas to destroy other ones. Otherwise the non-politically correct information will just sit on one side and the other on the other side. A stalemate like trench warfare, there has to be a way for information to do battle with clearer victories like in the pre-internet day. If we can't allow total war as it was, maybe some way of organizing pitched battles, meeting grounds where winner takes all (or most, even in bad ideas you can find good like finding gold in river debris) can happen on a set date.

Ga --
The internet by its nature does not really allowed for balanced websites, anymore than any individual newspaper allows for truly balanced coverage. It's just a collection of sites each promoting a certain point of view. (Like this blog.)

John - I didn't know that taking steroids had that affect on men.

And although I have never seen Kathy Griffin perform - her duplicitous nature doesn't surprise me. She will come out saying "the right" things, then when that doesn't work - play the victim card. It's almost become a standard formula.

The only comedians I have found entertaining are Richard Pryor, Bill Hicks, and Doug Stanhope - who you may appreciate.

Shaun --
That's what I've heard from a number of sources (about steroids).

I liked Pryor, wasn't familiar with the other two. Just watched a little Stanhope, via your link. The part I saw was entertaining, but it didn't really make me laugh.