If this morning's shooter had been a Republican

This morning's shooter has been identified as James Hodgkinson of Illinois, a Bernie Sanders supporter and anti-Trump zealot.

He evidently asked a bystander if it were Democrats or Republicans playing on that baseball field, and then, when he was told they were Republicans, opened fire in an effort to kill as many of them as possible.

Bernie Sanders' office has released a statement saying that he is "sickened" by this morning's shooting. (What else can he say when one of his supporters gets so overenthusiastic?)

Paul Ryan said that "An attack on one of us is an attack on all of us," the kind of high-minded but neutral statement which, when analyzed, means exactly nothing.

Trump himself called for unity, as a President should.

And most of the Democrats have been relatively quiet so far. When they do speak up, it will undoubtedly be to distance themselves from the shooter, whom the media will undoubtedly describe as a lone, troubled individual. And the emphasis from the Left will be on gun control: why are those horrible Republicans so beholden to the NRA?

And then, after a few days, the coverage will fade.

Of course, if Hodgkinson had been a Republican gunning for Democrats, what we'd hear from the media would be entirely different. This shooting would stay in the news for a couple of weeks, not a couple of days. And all the talk would be all about how Trump had engendered a climate of hatred and intolerance, and how he had encouraged his violent followers to wreak as much havoc as possible.

After a few days of that type of coverage, most people would be left with the vague impression that Hodgkinson had gotten his marching orders directly from the White House, and Trump himself had handed him the SKS rifle, along with several boxes of ammo. 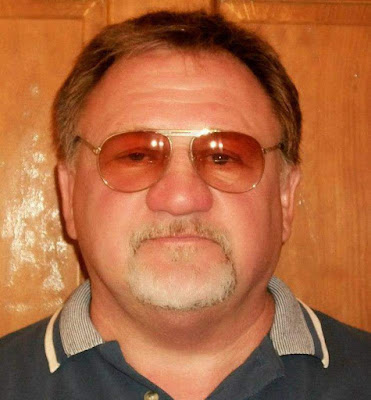 To me, Hodgkinson has the look of a killer, from his smug look to his thin lips. And, he has a certain undefinable air about him that says, headstrong. But, one picture can be deceiving, and really, there are a lot of harmless people who look like that. (And to be perfectly honest, if I had known nothing else about him and you told me he was a 66-year-old blue collar home inspector from the Midwest, I would probably have just assumed he was a Trump supporter.)

As it turned out, he wasn't much of a killer. Even armed with a rifle, he killed no one, and only wounded five, despite having reportedly shot over 50 rounds. And he was taken down from a distance of around 100 feet by two Alexandria police officers armed only with pistols.

Anyway, it'll be interesting to see how the media spins this.
Posted by John Craig at 3:46 PM

There's a lot to go on here - but how about the contrast to the 2011 Loughner shooting of Giffords (six others killed). Do a Google search - see how many stories blame conservative 'hatred', 'vitriol', etc. The press immediately, and wrongly, attempted to associate Loughner with the Tea Party.

Yet during the 8 year Obama presidency, no comedian held up Obama's severed head, with the entire face covered in blood. There was no play depicting Obama's assassination in NYC. There was no Republican mantra to RESIST every single thing Obama did. Congress was not at a stand still due to a fictional story about how he stole the election with the help of a foreign power (though - to win his second term - his administration put forth a wildly fabricated fake news story that the terrorist attack on the US embassy in Libya on the anniversary of 9/11 was actually due to outrage over some nobody's YouTube video that had previously gotten no attention. And the Obama administration was basically given a free pass on that).

There was none of that. By and large conservatives politely tolerated Obama (certainly as compared to the Left's reaction to Trump), as much as they disagreed with Obama's agenda and world view.

Ed --
Yes, and Loughner was an obvious schizophrenic, too. But that didn't stop the Left from saying he was a creature of the Right.

What the media let Obama get away with was amazing. Had a Republican done Fast and Furious, heads would have rolled. But Obama and hOlder stonewalled, and it worked. Had a Republican used the IRA to target Democratic groups, it would have been grounds for impeachment. But once again the Obama administration stonewalled, and nothing happened, in part because the media just dropped the subject.

The Left and Right play by different rules.

Due to the ugly, despicable behavior of the current batch of Democrats, the Democratic party has lost members to it's organization. I have read many comments on other web sites (over the past months) where former Democrats (even lifelong, multigenerational Democrats) have left the party due to the things that have transpired thanks to other Democrats. Some commenters have stated that they don't even recognize their own party. Others have stated that they will never return to or vote in another Democrat. Score for the right!

Susan --
I would think that the Democrats would lose a lot of voters simply because of the behavior of the Far Left, which includes the Antifa types, the BLM types, the more aggressive LGBT types, and so on. They all helped Trump get elected, no question.

Worse than spin - the NY Times was caught in a lie and forced to print a correction.

Sad really that a leading publication would print a known falsehood about right wing incitement being the cause of the Gifford shooting.

GT --
Thank you, yes, Steve Sailer mentioned that the morning too. The Times is nothing but a liberal propaganda organ and has been that way for a long, long time, though it's gotten worse since Trump's rise.

I can't read a single "news" article of theirs without seeing all sorts of spin and misdirection. And maybe the worst part is, that spin extends not only to their arts section, but to their sports and business sections as well.

It seems this fellow, by reports, constantly watched the MSM and loved Rachel Maddow's show. Having been fed lies, hatred for anything contrary to Dem socialism and the continued "smoking gun" stories that will get Trump removed or impeached he'd apparently had enough. It's like being told your favorite sports team will win by shutout game after game only to see them lose by shutout game after game. Sheep like him will eventually reach a breaking point.

The breaking point for most liberals is they turn on the DNC, fed up with being led by ignoramuses. A small few, like the moron from yesterday, will still be beholden to the cretins that feed them BS daily and decide they have to do something on their own otherwise it won't be done. Now I realize he was a Bernie socialist and didn't like the sociopath Hillary but that's not the point.

There have been warnings that since someone has opened that door more will follow. That remains to be seen. The MSM will continue to spin against anything non-Democrat and follow lockstep with the DNC. Alinsky and Obama will be proud.

Not Dave --
I heard yesterday that Maddow didn't mention him at all on her evening show. (I can't corroborate that, since I don't watch the show.) But if true, that would be pretty shocking given that it was the biggest news event of the day.

"the cretins thats feed them BS daily" -- that's actually being kind. Some of those "cretins" are exactly that, useful idiots, but some are purposeful liars.

Gambino Dellacroce --
I had to look up Cullotta, but yes, there is a real resemblance. You chose your moniker well, you really know your gangsters.