Saw an article this morning about Julia Jacobson, 37, an Army veteran whose body was just found buried with her dog in a shallow grave near Riverside, California. She had been missing since September.

It was also reported that her ex-husband, Galen Ware, had been arrested for her murder (back in October). Here's a picture of them: 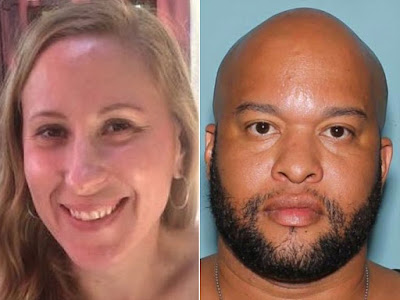 And here's an earlier picture of Ware from his football-playing days at Arizona State University:

I keep seeing pictures of powerfully built men (Ware played cornerback, and was listed as 5'11", 190) who are violently inclined who seem to have vestigial sagittal crests.

Maybe it's coincidence, maybe not.
Posted by John Craig at 3:27 PM

The shape of the man's head is ugly. The poor woman. If a man show's any sign of physical aggression toward a woman, that woman needs to ditch him fast.

Susan --
Ware had evidently had a restraining order taken out against him by a girlfriend a few years ago.

usually the black man beats up on the white woman, in these arrangements, sagittal crest or no

"or at least, that has been a strong trend, in my own anecdotal observations," says the WISE OLD OWL

My experience is abusers and murderers come in all shapes and sizes. My guess is he used steroids. He certainly had gained weight since his college days but that can also be attributed to not working out nearly as much as when he was younger but still having the appetite for food/calories.

Not Dave --
There's no question murderers come in all forms, but a sagittal crest is fairly rare, and I seem to have seen it disproportionately among violent criminals. And for some reason, most of them seem to have powerful builds, too.

Actually, I just noticed yesterday afternoon while I was reading about Ken Kesey, one of my heroes, that he has a little bit of a sagittal crest, too, though in his case it may have been partly an optical illusion caused by his balding pattern. He was powerfully built in his youth (a champion wrestler at 175), too, though he was not violent.

Hey John. I'm very good at reading people. But my best friend growing up for 25 years puzzles me. He either is an aspie or a sociopath.But you might have answered the question for me. We use to make fun of his sagittal crests as kids.
Kenny

GUINEA HENWEED --
Good example, Antwone seems to have one too. Judging from the thickness of his neck, he doesn't appear to have the powerful build that a lot of these saggital crested guys have; but who knows, maybe the rest of him was muscular.

Kenny --
Not sure how I answered your question, as I didn't connect saggital crests with either Aspergers or sociopathy. Though I guess it is possibly connected with violence, which does have a positive correlation with sociopathy.

(If that's the case, my advice is, stop making fun of him.)