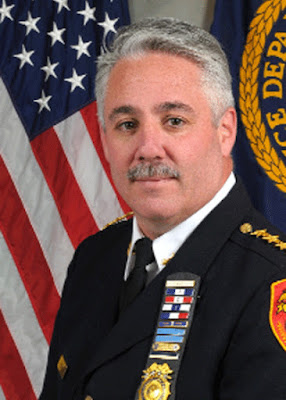 Last December I wrote about James Burke, the disgraced former police chief in Suffolk County, New York. He had beaten up a handcuffed man who had been accused of breaking into his car and stealing his sex toys and pornographic tapes. What I said at the time:

[He] was in the news for having purposely stymied an FBI investigation into the Gilgo Beach serial killings for several years, and also for having beaten up a handcuffed man who was accused of breaking into Burke's car and stealing his sex toys and pornographic tapes. Burke is also alleged to have broken into the suspect's apartment to retrieve those stolen items, and to have intimidated potential witnesses, including police who worked for him.

It occurred to me a year ago that Burke could actually be the serial killer. I didn't say so on the blog, because it sounds so farfetched. But it's not as farfetched as it sounds. What did we know at that point?

-That Burke is a sociopath: anybody who would beat up a handcuffed suspect and also intimidate the police who work for him would pretty much have to be one.

-That he was a bit of a sex maniac, given what he was carrying around in his car.

-That he had broken into the suspect's apartment to retrieve those tapes. (Why,  unless they somehow incriminated him?)

-That he had stymied the FBI investigation into the Gilgo Beach serial killings. (Why? You'd think most cops would be glad to have FBI assistance with that sort of thing.)

Yesterday, the NY Post ran an article about a prostitute who has claimed that Burke took part in "sex parties" at Gilgo Beach near where the bodies were found:

A disgraced Long Island police chief is being connected to the infamous Gilgo Beach murders by a lawyer for one of the victims and a prostitute who claims the cop participated in area “sex parties.”

“This is the first time that there has been an actual connection made between former chief police Burke, Oak Beach and prostitution,” the lawyer, John Ray, said at a press conference.

Also, the prostitute who identified herself as Lee Ann claimed she had “rough sex” with Burke.

Lee Ann also said she witnessed Burke “grab a girl by her hair and drag her to the ground.”

Ray, the lawyer for the family of slain woman Shannan Gilbert, hopes to question Burke under oath about the his role in the parties.

The bodies of eight women, a man and a toddler have been found on or near Gilgo Beach since 1996.

Some of the murdered women are believed to have worked in the sex industry.

I'm not saying Burke is the serial killer. But I'd bet he's at least a person of interest in the case to the FBI now.

If Burke was the killer, he was in the perfect position to execute those crimes. He could have driven around all day in that area with a dead body in his police car, and nobody would ever have stopped him, since all the local cops reported to him. And now we know he took part in sex parties with prostitutes near Gilgo Beach. And that he liked to rough them up.

If it turns out that Burke is the killer -- if it can be proven -- this will be a huge, huge story.
Posted by John Craig at 9:13 PM

I read about this guy recently via another website that has become my source for news. After reading the article, I had the thought that could be serial killer.

Susan --
The whole story is so fantastical that it sounds as if it came from a work job fiction. And who knows, maybe the theory is fiction. But in the meantime, there's a lot of circumstantial evidence pointing in his direction. And there's also the matter of character.

When he was a teenager, he was a star witness in a murder case, grew up to be a cop, and ended up working for the prosecutor who he was the star witness for as a teenager. Someone could write a book about this guy. He's capable of anything.

Susan --
it's as if it's all been lifted straight out of a film noir.

I would imagine being outed as potential serial killer must impact his dating activities. what is conversation at dinner/dessert like for this guy?

Date: so other than that ,how are things going ?


on the other hand, maybe being a potential serial killer attracts the curiosity seekers.

Dave --
I doubt he's doing much dating at the moment, he's serving a four year jail sentence for that assault against the handcuffed suspect. But you're right, serial killers, especially the famous ones, attract women who suffer from hybristophilia. Look at all the groupies who clustered around Ted Bundy and Richard Ramirez.

Yes, I'm guessing he's going to be a household name before all this is over.

Ah, the next Lifetime movie of the week..."Killer Justice" starring John Stamos. Lol

Lots of those in the New York area.

Rifleman --
As one who worked on Wall Street, I agree wholeheartedly.

The only thing is, Burke may be a lot more than just a regular old dumb overachiever. If it turns out he is the killer, and if they can prove it, he'll become one of the most famous killers ever.

So, have any more bodies been found since James Burke has been incarcerated? I am interested in learning more about the case where he was the star witness. Was James Burke involved in that case, actually being involved himself in the murder of a boy? Learning the facts of that case would be interesting.

Susan --
I don't think any new bodies have ben found recently, I'm pretty sure the count has been eight women, one man, and one child for a while now. I don't know much about that case he was involved in as a boy.