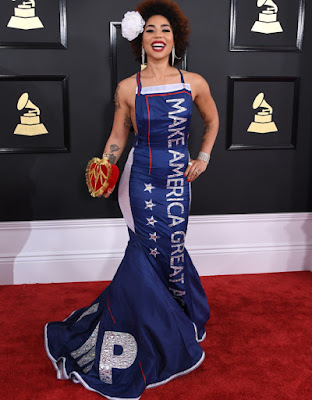 It must have taken some courage -- or, at least, nerve -- to appear that way at a show business event where anti-Trump sentiment would be near unanimous. Turns out, it was the smartest thing Villa could have done.

In an article this afternoon, the NY Post reported:

A hitherto little-known singer who donned a dress lauding President Trump at the Grammys saw a spike in the online sales of her record. Joy Villa’s “I Make the Static” soared to No. 1 on Amazon and No. 11 on the iTunes album chart as of 12:30 p.m. Monday.

Villa, a 25-year-old Scientologist who performs as Princess Joy Villa, sported a red, white and blue gown emblazoned with the president’s “Make America Great Again” motto as well as the name “TRUMP” in even larger letters.

You can come to your own conclusions about Villa's singing ability, demonstrated here, on Youtube. And you probably already have an opinion about her religion of choice, Scientology.

When Fox News first appeared on the scene and then quickly vaulted to the number one spot among news channels, it wasn't because either Bill O'Reilly or Sean Hannity were so incisive or charismatic. It was because Fox was the only conservative news network available. So while all the other left of center channels had to fight for that half of the TV audience, Fox got the entire conservative audience all to itself.

Likewise, when Madonna publicly expresses her antipathy for Trump, nobody decides to buy more of her music for that reason. Why would they? She's just one of many reciting the company line.

But Villa must be the only young pop singer out there who has dared to publicly express admiration for Trump. So, a lot of Trump supporters decided to vote with their wallets, and give her a chance. 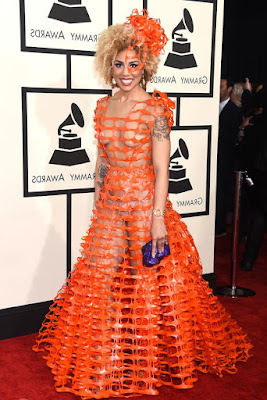 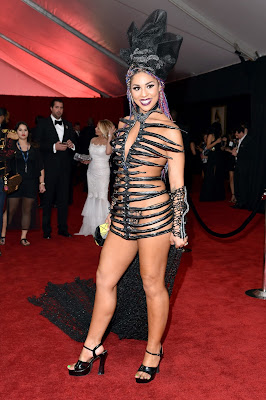 But then again, you can't be inhibited and be a performing artist.


The general rule among female singers is, the more flash and exhibitionism, the less singing talent. From what I've seen and heard, Villa doesn't violate that rule. But she's now a household name. And in show biz, sometimes that's all you really need.
Posted by John Craig at 8:05 PM

Trump should award Joy with the Presidential Medal of Freedom. It sure took courage
and gumption to show her support in a pro-left arena.

Sherie --
I thought so too, though those other two outfits (worn to previous Grammys) show a different type of "courage and gumption." But all those types of traits: courage, gumption, nerve, gall, and shamelessness, all sort of blend into one another.