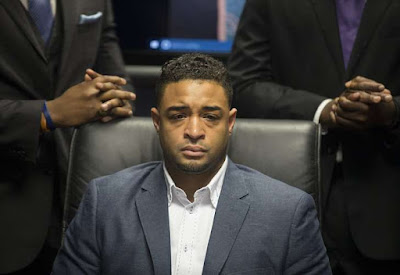 Here is a statement from Brown's attorney Austin Kaplan:

“Pastor Brown never asked for this to happen. He continues to be overwhelmed by the feelings of pain, anguish, and humiliation because of this incident. He frequently shopped at Whole Foods, which makes this all the more shocking and disappointing. What really concerns him is knowing that unless some action is taken, this kind of thing could happen again, and that someone else might have to go through a similarly excruciating experience.”

Practically breaks your heart, doesn't it?

And how noble of Brown that his real concern is not any monetary gain or attention for himself, but the thought that "someone else might have to go through a similarly excruciating experience."

Except there was one little glitch: as the security cameras later proved, it turned out that Brown had added the extra word himself.

So Kaplan's statement is in fact partially true: Brown never asked for this incident to happen. He simply made it happen.

Does Pastor Jordan Brown suffer from Munchausen's Syndrome, that "disease" (which only sociopaths seem to suffer from) which "compels" its sufferers to go to extremely dishonest lengths in order to gain attention and sympathy?

Is he another Leftie who simply wants to further his cause by any means necessary?

Is he simply another sociopathic con man who figured he could squeeze a few bucks out of deep pocketed company with his scam?

Or is he some combination of the above?

Whatever he was, he certainly fit the well-worn pattern of recent hate hoaxers: they all fit the description of a "victim" as defined by the Left. Worse, they seem to revel in that description.

What conclusion can you draw from the fact that all of the hate hoaxers come from the Left?

And, if you believe in the concept of hate crimes, isn't a hate crime hoax itself a hate crime?
Posted by John Craig at 11:51 AM

Anybody who accuses somebody of an offence should get the punishment that the person they accused would have got if they had been convicted. That seems perfectly fair to me.

I'm glad that Whole Foods is suing the pastor (of course being a sociopath, the pastor could care less). Unfortunately, Whole Foods now has to pay lawyers to go after this slimeball.

Susan --
These lawsuits tend to be one-sided, just because one side has deep pockets and the other doesn't.

I hope Whole Foods goes through with their lawsuit to hopefully teach him he's not as smart as he thinks he is. This hoax smells like sociopath to me!

Runner Katy --
I hope they do, too, though they have less financial motive than Brown had to bring a suit since there's probably not much money to be milked from him. Agreed, he has to be a sociopath. Basically, all of these hate hoaxers are.

It's disturbing how narcissists like this have no sense of guilt when they blatantly lie.

Shaun --
I'd say he's worse than that; he's a sociopath. (Narcissists, while they spin everything to make themselves look good, think more highly of themselves than they should, and have a hard time admitting it when they're wrong, generally don't engage in outright scams like this.)

your question "what conclusion can we draw about hate crime hoaxes being more prevalent from the left?" is an interesting one, it calls out for a theory...

I want to resist the theory in the title of Vox Day's book "SJWs Always Lie" if only because it is not explanatory, just declarative...

perhaps it relates to how leftism is often an-appeal-to-the-emotions that emphasizes the virtuous status of victims and losers (whereas rightwing emotional appeals elevate hero snipers, successful entrepreneurs, in short, winners)...so for a leftist there is more attraction posing as a sacred victim (though there are phony leftist war heroes) whereas a rightwing person has to reach further out of his customary emotional repertoire to imagine himself as posing smeared with dog feces (or similar) as part of a plan to achieve some personal goal

obviously, there will be exceptions, this is just a first thought on this subject

(by the way Mister Craig I very much enjoy your blog, please allow me to express admiration and offer encouragement for your effort)

Anon --
Thank you very much.

I like your explanation, and it's definitely part of the reason why Leftists lie so often. You're right: with them, it's all about appeals to emotion, all about Good and Evil, and they'll skew or even make up facts to suit their narrative. And yes, with them, there are no human failures, only victims.

Birdie --
I certainly hope so too.