Leo DiCaprio was in the news two days ago for having taken a private jet to fly from Cannes to New York and back in order to accept an award for his environmental activism from the Riverkeepers group.

A private jet burns as much fuel in an hour as the average car does in a year.

When DiCaprio accepted his Oscar for The Revenant in late February, he said in his acceptance speech, "Climate change is real. It is happening right now. It is the most urgent threat facing our entire species and we need to work collectively together and stop procrastinating."

This weekend's private jet was bad enough, but it turned out that DiCaprio had taken twelve private jet flights from New York to Los Angeles and back over the course of six weeks in April and May of 2014. 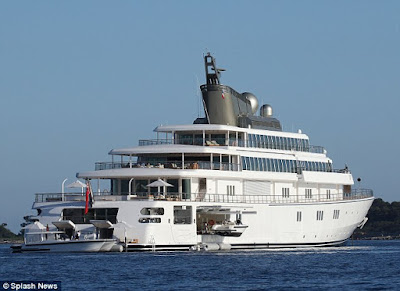 Of course, when he's at home in Los Angeles, Leo drives around in a Prius to demonstrate what a noble eco-warrior he is. And every now and then he and one of his girlfriends will pedal around on bicycles just to show the rest of us how it's supposed to be done.

There seems to be an ironclad rule: you're not allowed to be a spokesman for the environment unless you're an environmental criminal yourself.

Al Gore, who won the Nobel Prize in 2007 for his effort to bring attention to global warming, is probably the most famous eco-blowhard of all. You probably remember how it turned out that his house in Nashville had a carbon footprint 20 times that of the average house. He had a fleet of SUV's, and traveled around in private jets. 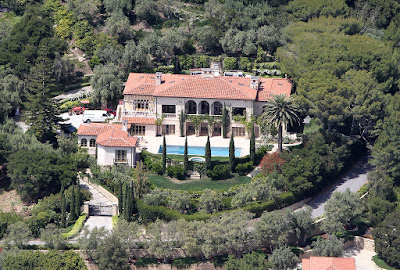 Barbra Streisand advises others to only turn their thermostats down to 78 degrees during the summer. But she regularly keeps her 16 room Manhattan triplex much cooler, even after she's taken a private jet to fly to one of her three houses in Malibu. Here's one of them: 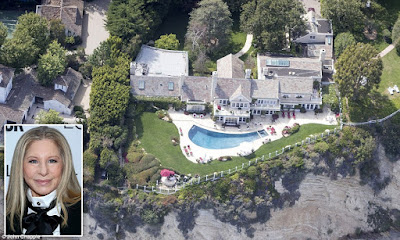 John Travolta has lectured us on how we all have to do our bit for the environment. Yet he owns a fleet of five private jets. Here's his house (seriously): 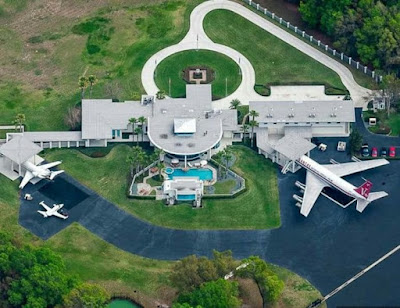 The list of eco-hypocrites has certainly been well-publicized over time; given which, it's hard not to wonder how they expect others to take them seriously.

People are most likely to criticize in others what they themselves are guilty of. In a comment on this blog, an Aspie accused me of having Aspergers Syndrome. A gay guy accused me of being gay. A sociopath accused me of being a narcissist who gets a buzz from other's misfortunes. And so on. A woman who obviously saw herself as an authority on Aspergers accused me of seeing myself as a "shining authoritative light" on the subject.

We all project somewhat, and we just naturally assume that others think like us. This is why nice people tend to assume the best about others, and sociopaths often assume others are treacherous liars.

But it's the narcissistic who are most vocal with their criticisms.

For the rich and famous and self-indulgent to hector others about their environmentally wasteful lifestyles certainly fits that pattern.
Posted by John Craig at 9:06 AM

John- Well written. This line "You're not allowed to be a spokesman for the environment unless you're an environmental criminal yourself." definitely resonates. In Canada, we have a "Scientist" David Suzuki, who is our moral compass for environmental issues. He's cut from the same wood as both DiCaprio, and Gore. Funny how morality is now equated to "Honoring the Earth".

Shaun --
Thank you. Unfortunately, morality is only equated with paying lip service to honoring the earth. If these guys practiced what they preached, I could respect them.

These guys are basically all the equivalent of televangelists who tell everyone not to sin, and to lead lives of purity and piousness, but are themselves the biggest sinners.

John - That does sound like typical leftists: paying lip service to maintain "good optics". I like the comparison with the televangelists! I had completely forgotten about the likes of Jimmy Swaggart or Jim Bakker. Now, time to go see how they've reinvented themselves. Take care.

Shaun --
Yes, unfortunately, it's all too typical….Just looked them up. Swaggart, who turns 81 this year, and Bakker, who turns 76 this year, are, remarkably, both still televangelists, though neither seems to make the news anymore. The people who follow them must just be incredibly dumb.

John - I did look them up and saw they were still practicing. I also noticed they were both Evangelical/Pentecostal and associated with the organization "Assemblies of God." That says a lot. I don't want to digress too much from your post, nevertheless I did find some of the information about Bakker sharing a cell with Lyndon Larouche...interesting.

Shaun --
Could be, I don't know. Yes, the "Assemblies of God" sounds almost as if it were made for disgraced televangelists who want to keep preaching and also don't want to share their income with a "head office" somewhere.

I'm not sure how your comment relates to the post, either. Wait a sec: it's because the A list stars get preferential treatment and don't do what they're having the others do. Okay, yes, I suppose that's a connection. fair enough.

I was riffing on your line about projection. It was evidently a failed joke. When a movie sort of fails(my opinion anyway) and has a lot of nudity in it you start wondering about why your at the movie in the first place. I wonder if the money men ever feel that way when they watch their investment on the screen. Yes, I should actually address your post. Movies themselves seem to be an incredible waste of energy with all the car chases and explosion but I guess it is art so it gets a pass.

Some people like car chase scenes and explosions. And nudity. And if the box office reflects that, I'm sure the money men feel they've made a good investment.

This morning, Al Gore was on the Today Show. I didn't watch the interview, since I was busy doing things at the time that he was on the show. However, I did notice that he doesn't have dark hair any longer - his hair was now grayish/whitish looking. His interview involved talking about climate change. As soon as I saw him, I remembered this post. LOL.

Birdie --
He also got a lot fatter after he left the government. He evidently makes a lot of money off of his environmental posturing. And he sold his cable network to Al Jazeera, which is financed by oil money.

Speaking of fat, this post reminds me of celebrity chef Jamie Oliver who is on a crusade to have people eat healthily. A few years back when he was in Australia promoting his 'Ministry of Food' he lost it at a reporter who asked if he had put on weight. He actually called her a bitch. Once his hypocritical stance drew a closer media spotlight, Jamie conceded that he had let his weight slip and yes, he needed a more balanced approach to diet and exercise.

Anon --
That's a good story, hadn't heard it before.

One general pattern I've noticed is that the less self-control people have, the more control they want over other people. The best example would actually be sociopaths, who have almost no self-control (and hence become "sex addicts" or "gambling addicts") but have an insatiable desire to be in charge.