While reading John Heard's obituary yesterday I was reminded of one of his greatest performances, as Cutter in Cutter's Way  in 1981.

I thought it was a cool movie at the time -- and I still do -- but what may have made the biggest impression on me was Nina van Pallandt's brief appearance. She played a rich Santa Barbara socialite who pays co-star Jeff Bridges for his services. Her one line is to tell him, after they've had sex, "Buy some Vitamin E." (Her entire cameo is included at the 1:01 mark of this trailer for the film.)

That one brief glimpse was enough to sear her into my memory banks, even though she was 49 at the time (I was 27). Maybe part of the reason she made such an impression was because it was so ridiculous to think that someone who looked like that would have to pay for sex.

(She had a larger role in American Gigolo, as Richard Gere's "pimp.")

When I read later that she had been involved with Clifford Irving at the time of his fake Howard Hughes "autobiography," somehow that slightly checkered past made her seem even more alluring. 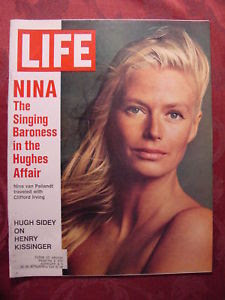 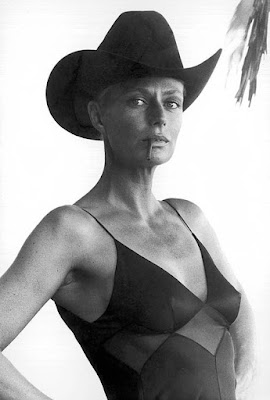 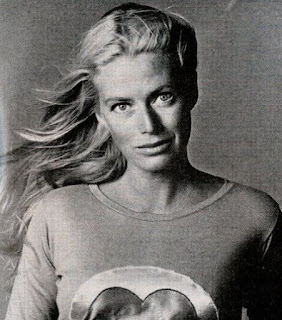 Her mouth may be a touch too generous, and her nose a little hawkish. But those "flaws" and the fact that her nose actually tilts to the left keep her from being a standard issue blonde beauty. She actually looked a little like Farrah Fawcett, the leading sex symbol of that era. But van Pallandt exuded a playful intelligence that made her far more appealing.

She remained lean and beautiful and elegant-looking for a long time. Here she was in her 20's: 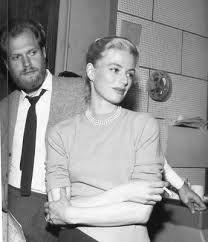 Van Pallandt started her show business career as a singer, and at age 37 sang "The More Things Change" for the Bond film On Her Majesty's Secret Service. (A little ironic that she would stay behind the camera, given that she was more attractive than any of of the actresses in that movie.)

She had three children with her second husband, Frederik, Baron van Pallandt. (I Google-imaged her daughters but could find no pictures.) She was married three times, the last marriage being a brief one in the 1970's.

She turned 85 a week ago today; she probably won't make the news again before she dies. In the meantime, she seems to have led a full life, which, for some reason, makes me glad.

There seems to be a long list of actresses who are far more attractive than the ones who went on to become huge movie stars, something I've never fully understood. Here's another one, and here are a few more.
Posted by John Craig at 8:58 AM

I learned about John Heard's death via another website. Some of the comments left by the public were quite enlightening, leading me to find out a little bit more about this actor. Based on what I read about him, it sounded like he could have been a disordered person.

Susan --
The obituary I read didn't say anything to that effect, but you just prompted me to read his Wiki bio, and his marital history hints at that. He was married three times, once for six days and once for six months. The six day marriage was to Margot Kidder, who was basically crazy, so I'd give him a pass on that, but the other, who knows. And I think it said he was arrested, or at least charged, with domestic abuse once and trespassing once, something like that. He looked a little bit like a drinker. But who knows, no specific disorder jumps out at me.

I don't find her particularly attractive myself. She looks nice on the second to bottom photo.

As for John Heard, I read an obituary from some celebrity friend who said he was the coolest guy in New York from like 74 to 84 and he had legendary powers of tolerance when it came to drink and drugs. He seems to have been a highly respected actor who was a heavy drinking, charismatic socialite.

I may have related before that for a while in the 1990s and early 2000s I made enough money from acting that I had to declare it on my income tax form. As best as I can tell, success in the film industry has little to do with raw talent or desire to succeed. It seems that just being in the right place at th a right time and having the right "look" for a part is all that is needed to kick off a film career. Ironically, actors who are highly intelligent are often less successful than others. Perhaps they think too much about a part and emotionally embrace it.

Just a few observations of a semi-pro actor.

Steven --
Heard was a great actor, no doubt about that. If you get a chance, watch "Cutter's Way." It's a little date now, but still cool. (Van Pallandt actually wasn't much of an actress, but back in those days that didn't seem to be any great hindrance to being a movie star.)

Luke --
I think you're right; there are too many stars who aren't good actors for that not to be the case. And yes, having the right look for a role is everything. Most of the biggest matinee idols were just handsome guys, and most of them couldn't act. When did Arnold Schwarzenegger, Clint Eastwood, or Sean Connery play anyone but themselves? (I'd have been impressed by their acting ability if any of them had been able to play a child molester convincingly. But that's impossible to imagine.

I also agree about acting ability not correlating with intelligence. When you hear what Leo DiCaprio, Johnny Depp, and Robert DeNiro have to say, it's obvious that acting ability has nothing to do with brains.

Melissa Leo, an actress, lived with John Heard, having a son with him. Apparently, he was abusive toward her. She had a restraining order filed against him. He stalked her and harassed her (via child custody issues). There was also a claim that he was abusive toward Margot Kidder, thus, the reason for their brief marriage. Finally, some commenters on other websites mentioned that he was a drinker.

something about her face reminds me of how the world was more wide-open in the DAYS OF MY YOUTH, when communists were smarter, and everyone was more of a renaissance man and more rooted in a non-global private culture

I saw a craigslist ad about "psychopath" and I thought of your blog, I hope it adds value:

"BEWARE! A parasitic psychopath wants to be your roommate!
This is my personal story. I rented my room to this guy. When he came to meet me, he said he has no friends and everybody kicks him out of their houses so he wanted to sign a lease. I told him he can stay here but I dont have a lease for you. He presented himself to be a victim and I bought into it and rented him my room.
It was only 2 months down the line that I came to realize as to why he doesnt have friends and why everybody kicks him out.

To begin with I noticed my stuff being used in the fridge. I ignored it in the beginning but later it became quite evident. So I started questioning him. But boy it was then I realized that he is such a pathological liar. He uses your arguments to turn them on you and make you feel that you are at fault. A classic psychopath and manipulator.
Though eating my stuff from fridge is not much of a big deal. But he progressed slowly. I started noticing that he kinda smelled like my cologne occasionally. One day he asks me where do you buy your cologne. Thats when I was kinda sure that he is using it and likes it.

The worst part is as follows:
He kept asking my work schedule almost on a daily basis. When I asked why doeshe wants to know(coz it doesn't make sense as he had hi personal key to the house). To this he replied that he is concerned about me and starts worrying. In the beginning I thought maybe he is gay.....insted he is a nymphomaniac. Somehow I came to know that he brings hookers behind my back and does them on my bed (he has been provided with a huge bed of his own though). Thats when I got extremely diagusted and told him to leave by the end of the month.

A couple of days ago he accidentally broke one of my belongings (thats what he said) and said that he would buy me a replacement. He did get me a replacement but a substandard one. So I asked him to give back my broken stuff and take his replacement back. (here I kinda had and idea that he might have stolen it and gave me a cheap rip off.) He said he had dumped it at hi workplace. I counter-questioned him that what was my belonging doing at his workplace? He started yelling at me. It was then that I tried to grab his work backpack because I wanted to catch him red-handed. But he snatched it from me and tried to get away. So I grabbed him.

So this psychopathic creature calls the cops on me for that. I told the whole story to the cop and he asked me to be OK till the end of this month. Thats when he will leave and try to find a new prey. BEWARE PEOPLE."

FAKE BABA --
Yes, there is something about van Pallandt that is reminiscent of a more exciting time.

Thank you for the story about the sociopath, and yes, that guy unquestionably is one. I like the way his picture was put in the article you linked, too.