"'Don't worry about it': Woman tells cops to chill over dead boyfriend"

Maybe I'm twisted, but I found the article referenced above hilarious:

Police arrived to the Orlando apartment on Tuesday night to find Everett Leslie Humble, 63, bloody and unresponsive on the porch, the Orlando Sentinel. He had been shot multiple times and was declared dead at the scene.

His girlfriend, Paula Lynn Hobbs, was at the apartment when police arrived and wouldn’t comply with officers. According to police, when asked what happened, Hobbs told them “don’t worry about it.”

Hobbs, 51, then reportedly locked herself inside the apartment with her live-in boyfriend’s body. Police said she eventually surrendered and allowed them inside the home.

“If you tell me he is dead, I will tell you why I did it.” Hobbs said, according to the police report.

According to WPXI, a .22-caliber revolver was recovered in a drawer at the couple’s apartment.

Here is a picture of Paula Lynn Hobbs: 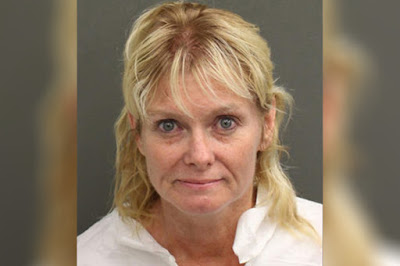 I sometimes wonder myself why the cops get so worked up about a little shooting. I mean, what's the biggie? And now, finally, someone has called them on it.

But it makes you wonder what else she'll have to say. At her trial, asked to describe what she did, she might explain, "Aah, not much, really."

And if the judge tries to lecture her, she can put it all into perspective by saying, "What're you trying to do, make a federal case out of this?"

It's hard to read much from Paula Lynn's face. She's not a bad-looking woman, and was probably considered attractive in her day. She looks as if she might have had a couple drinks before the photo above was taken; but she doesn't have the ravaged look that long time addicts get.

Whatever her story is, I find her inspirational.

If I get caught with 100 kilos of fine white powder tightly encased in clear plastic wrapping in the trunk of my car, and the police ask what it is, I'm just going to say, "Ah, nothing," and close the lid of the trunk.
Posted by John Craig at 12:12 PM

I read about this woman via a couple of other websites. Her response to the cops was rather unique. It turns out that the lady killer has a criminal history.

Susan --
Somehow that's not surprising. I tried to look her up, but all I could find was a mugshot from 2016.

Ah Florida. Doesn't it seem like the more "interesting" people stories seem to come from that state? I remember when I was stationed there and plenty of stuff would happen locally that didn't make national news. Nice place overall though. Don't worry about it. Ha!

Arthur --
Florida does seem a pretty combustible mix. First you've got the Miami area described by Tom Wolfe in "Back to Blood": Cubans, native born blacks, Haitians, Dominicans, Jews, Russians, and a few WASPs. Then you've got the Panhandle area, which is almost like the southernmost part of Appalachia. This woman was from the Orlando area; I've never been there, when I hear "Orlando" I just automatically think Disneyworld. But I guess the warm weather makes all types feel relaxed and uninhibited, so stuff happens.

John- She looks like she has a typical "sanpaku" eye appearance common in other sociopathic killers like Charles Manson, James Holmes the movie theater killer, Adam Lanza.. there are a bunch of others.

Smallberries --
That was an education. I'd never heard that term before, so had to look it up. And sure enough, the three people you mention have that. (For those who haven't herd of it, it means having the whites of the eyes show either above or below the iris.) If you Google "sanpaku eyes," over half the people whose pictures come up are people who are disturbed. Interesting.

I also found that when I did that to my own eyes, I "felt" crazy.

(I'm not even sure Holmes and Lanza were sociopaths btw, Holmes always struck me as schizophrenic, and Lanza as autistic.)

Hi there from Orlando! Yes, we have quite the mix of crazies here and I think unfortunately the crazy ones like to be in the limelight, which is why when they commit stupid crimes (or atrocious ones, like this) they do it in a big, public way. I kind of feel we have less sociopaths than the Philly area, though, for what it's worth, ha! Most people who work and live here are just happy to have year-round sunshine.

Runner Katy --
I did think of you when I read about this woman (because of the location, not because of any personal resemblance, obviously). I"m sure Orlando has less crime in general than Miami, or the Belle Glades area. Or Philly. Actually, now that you mention it, I think the crime rate of any area is probably a pretty good proxy for the incidence of sociopathy in that area. You'd have to cross reference it with poverty levels, of course; but even among poor areas, some are high crime and other much less so. And that's probably pretty telling.

I wonder what the back story is on the shooter and shootee. What was the guy thinking? Desperation? Thinking with the wrong head? Turned on by psycho bitches? The whole thing is weird from the get go.

Allan --
My guess is that all of the factors you just mentioned probably played a role.

Paula Lynn Hobbs, if that is her real name, should get the death penalty for what she did to the man in Orlando, FL. Just because she did not contest is no excuse for not making her pay with her life. Hopefully no parole will ever be granted. And, if she would have been picked up for breaking probation from August 2016 ruling from assaulting this same man, the man may still be alive. Look at her face. She looks happy.