A tale of two blondes

Megyn Kelly has had an interesting career trajectory. First she was a star-in-the-making at Fox. Unlike most of the perky blondes who populated that network, she seemed to actually think for herself. The execs there were impressed, and after Bill O'Reilly was #MeToo-ed out of his career, she was given the prime 8PM slot.

Then came that fateful Republican debate in which she pointedly asked Donald Trump about how he had treated women in the past. This seemed a legitimate enough question, given his history. And if she hadn't asked it, there were certainly plenty of other people who would have -- and did -- during the course of the campaign.

But, that was the beginning of the end for her at Fox.

The brass at NBC, however, seemed to take her question as proof that she was on their side, so they hired her, with great fanfare, to be a soft news host on their 9AM slot. But to their dismay, she continued to demonstrate independence and outspokenness, and not just at Trump's expense.

Jane Fonda had talked publicly of her plastic surgery earlier; but when Kelly asked her about it, it was considered a gaffe. When Kelly cut off Tom Brokaw because they were up against a commercial break -- a reality that has to be dealt with on every talk show -- that too was considered another gaffe. On other occasions, Kelly was criticized for her awkward dancing.

The last straw for NBC, as has been widely reported, was when she said that kids dressing up in blackface was not necessarily that bad. Her exact words:

"But what is racist? Because you do get in trouble if you are a white person who puts on blackface on Halloween, or a black person who puts on whiteface for Halloween. Back when I was a kid that was OK, as long as you were dressing up as, like, a character....There was a controversy on The Real Housewives of New York with Luann, and she dressed as Diana Ross, and she made her skin look darker than it really is and people said that that was racist. And I don’t know, I felt like who doesn’t love Diana Ross?"

But the news outlets which reported her comment for the most part didn't analyze exactly what she said, but simply implied that she had condoned Al Jolson-style blackface done for the sake of racial mockery rather than refer to a specific instance of what was essentially a tribute.

Meanwhile, it turned out that NBC's own Jimmy Fallon actually dressed up in blackface as Chris Rock. Jimmy Kimmel donned blackface to portray Karl Malone. And NBC's Al Roker donned a wig of straight white hair to portray fictional character Doc Brown. (Roker later said his version was okay because he didn't wear facial makeup; decide for yourself how fine the line being drawn there was.)

None of them, of course, suffered any ill consequences.

Once again, "racism" is defined as however you can hurt your political opponents, hypocrisy be damned.

Elizabeth Warren's claims of Indian ancestry have been well-publicized; you're undoubtedly familiar with that saga. It's certainly harmless enough to mention that one's family lore includes rumors of an Indian ancestor a few generations back. But listing oneself as Native American on the Harvard University faculty when that is obviously untrue is another matter.

Warren is, for all practical purposes, Rachel Dolezaal, Jr.

But instead of being given the Dolezaal treatment -- shameful ignominy -- she is still being touted by the Left as a possible Presidential candidate. (Admittedly, that talk has died down a bit since the latest iteration of her tale.)

Likewise, for Harvard Law School to have proudly proclaimed that Warren was their first "woman of color" on the faculty was simply dishonest.

Given all of which, it was a little surprising to see this early picture of Warren as a brunette: 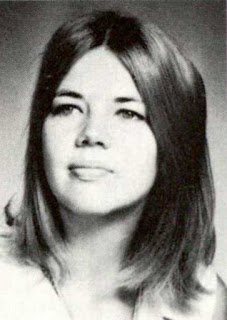 (She must have dyed her hair blonde later on to emphasize her Indian ancestry.)

You can say that as a media personality, Megyn Kelly should have anticipated that her comment would be taken out of context and willfully misconstrued. You can say that no one should feel sorry for someone as wealthy as her. And you can say that her rumored behind-the-scenes diva-like behavior alienated coworkers. All of those things are probably true. But it's also true that her biggest crime, as far as her detractors are concerned, is to show a common sense and honesty which have gone out of style. (Bear in mind, her independence offended those on the Right as well as Left.)

Elizabeth Warren went a step further than blackface, and actually claimed to be what she is not.