Joe Biden has gotten some bad publicity the past couple days for his peculiarly Bidenesque response to the question of how he would handle the problem of violence against women.

"No man has a right to raise a hand to a woman in anger, other than self-defense and that rarely ever occurs," he said. So we have to just change the culture. Period."

This got me to thinking, how would I handle that problem?

After some extensive soul searching, I finally hit upon the perfect solution. I would change the culture by slapping it around a little, then ripping off its clothes and raping it.

The people who hate Trump the most

One strong correlation that's become increasingly apparent over the past few years is that the most rabid Trump-haters tend to be those who are in fact most like him, character-wise: narcissistic personalities.

I'm not talking about those who simply dislike Trump. A lot of people, even his political supporters, fall into that category.

I'm talking about the people who cannot talk about him without almost frothing at the mouth.

Psychologists always say that what people hate most is what they dislike about themselves. It's why stupid people always castigate others for being dumb, why habitual liars always suspect others of dishonesty, and why those who lecture others about global warming are usually the biggest environmental sinners themselves.

In that sense, Trump is a Rorschach test.

Eric Schneiderman used to be one of the most prominent Trump haters. As New York State Attorney General, instead of ferreting out corruption in Albany, he focused his energy on attacking Trump. He brought suit against Trump University, sued to force the release of Trump's tax returns, and, along with several other attorneys general, sued to prevent Trump's Muslim immigration ban.

When the initial allegations against Harvey Weinstein first broke, Schneiderman, a vocal supporter of the #MeToo movement, said, “We have never seen anything as despicable as what we’ve seen right here.”

Schneiderman, of course, was forced to resign after it emerged that he had physically abused at least four former girlfriends, slapping several of them hard across the face, and calling one of them his "little brown slave."

The interesting question is, how self-righteous Schneiderman felt about his virulent hatred of Trump (and Weinstein). Did he see himself as a knight in shining armor fighting the good fight against the twin scourges of racism and sexism? Did he see himself as one of the good people, trying to fend off the evil that Trump represented?

Narcissistic personalities are capable of that kind of hypocrisy.

When Harvey Weinstein initially defended himself by saying he was "just an old dinosaur" who had come of age during the "free love era," he also suggested that his critics focus on fighting "the real enemy, Donald Trump."

Did he see himself, perhaps, as Brad Pitt fighting the Nazis in Inglourious Basterds? As Frodo trying to save the world from the evil Sauron? As Nelson Mandela fighting for justice and equality in Long Walk to Freedom?

Weinstein, as I explained here, is a sociopath. And all sociopaths are, by definition, also narcissistic personalties.

Judge for yourself whether each of these people are narcissistic personalities.

Think of the most rabid Trump-haters you know. Are they not narcissistic personalities themselves?
Posted by John Craig at 5:36 PM 12 comments:

Not recognizing people of other races

I recently had an argument with a former classmate about people who have a hard time telling members of other races apart. (Specifically, the subject was whites who don't recognize Asians.) This woman is white but grew up in Japan, and was offended that whites might not recognize individual Japanese.

She seemed to feel that those who had a hard time telling members of other races apart were somehow morally wanting.

Speaking as a half-Asian, I understand why some whites, especially those who've had limited contact with Asians, can't tell them apart. Whites come in a wider variety of obvious physical differences, like hair color, facial shape, nose structure, height, build, etc. Asians exhibit less variety in all those traits, so if you're not used to them, it would only be natural to have difficulty telling them apart.

My mother found it extremely annoying when a local white woman once mistook her for the woman at the dry cleaning shop (decades ago). I certainly understand why my mother was insulted, but I don't really blame the white woman.

A young black woman once told me she had a hard time telling the old white guys at her law firm apart, since they all dressed similarly and sort of looked the same, with their white hair and wrinkles. I can't blame her for that either.

Nor do I blame whites for mistaking one black for another. I've seen this happen on a number of occasions, and it's always embarrassing, especially given the current social climate. But again, it's understandable.

And as the LGBTQ crowd always reminds us, it's unfair to blame people for something they can't help.
Posted by John Craig at 6:02 PM 8 comments:

Scott & Bailey is a British police drama available on Amazon Prime. I told a friend the show was originated by a woman, written by two women, and produced by a woman. It stars two women as detectives, and their boss, the head detective, is also a woman.

He replied, ugh, it sounds terrible.

It's actually quite good; I watched several seasons. But that's not the point of this post. The point is, if you're going to have a lady detective, it's more important to have her look intelligent than to look pretty. This may not be true from a marketing standpoint, but it is from a realism standpoint. 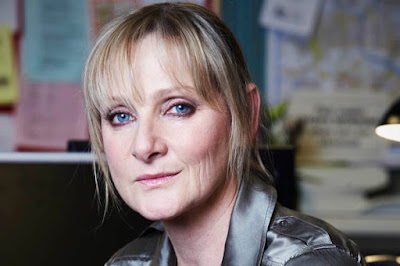 For all I know, Sharp is a moron. But her face reflects appraisal, skepticism, and maybe a little disappointment. (Precisely the qualities -- and emotions -- that one would hope for in a detective.)

She looks a little like a younger version of Joan Hickson, who played Miss Marple: 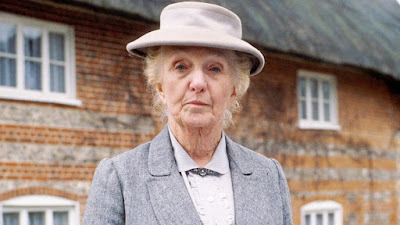 Joan Hickson usually wore a similar expression, and had the same intelligence in her eyes. (The correlation between skepticism and IQ has to be pretty high.) And both women act with the same calm demeanor that one associates with intelligence.

Both women have the same large-eyed, owlish gaze.

That got me to thinking, why are owls associated with intelligence? Are they that smart? But when I looked it up, it turns out that the reason is basically because Athena, the Greek goddess of wisdom, was usually depicted with an owl nearby, and that association has stuck.

Owls, unlike crows and parrots and pigeons, cannot be trained to do anything. (Keas, various species of parrots, and crows are generally considered the most intelligent birds.) But owls have large, observant eyes and intent expressions, so it's easy to see why the assumption is made: 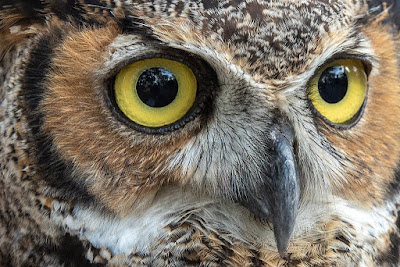 This isn't to say they're not awesome birds of prey, particularly the great horned owl (pictured above).

But whether or not they are, owls look smart -- like Lesley Sharp and Joan Hickson.

I've no idea whether or not Sharp and Hickson actually are/were smart. But I find them far more palatable in their roles as lady sleuths than I would have some sexy babe.
Posted by John Craig at 5:55 PM 1 comment:

The difference between the higher- and lower-IQed is that the higher are generally capable of seeing patterns more clearly, and grasping more complicated concepts.

It's not that they don't do as many stupid things.

I'm a case in point. I was told when young that I had a high IQ, but over the course of my lifetime, that doesn't seem to have cut down the number of dumb things I've said in the least. (In all honesty, it may have increased the number.)

I probably say more awkward and social inappropriate things than an 85 IQer. (This is not false modesty.) These faux pas fall into three major categories.

The first stems from a lifelong desire not to be boring. (I can't bear the company of the boring, and am well aware that others can find me so.)  But if I try too hard to be amusing, or say the unexpected,  I often lose sight of social propriety. (Which, frankly, I've probably done with this blog.)

The second category has to do with wanting to prove my masculinity, or my nerve. Even worse, in order to keep up that somewhat hollow macho front, I'll sometimes feel compelled to do something foolish. I don't even need someone else to manipulate me by challenging my masculinity, I do it to myself.

The final reason is just my blunt nature. I wouldn't ask someone if a certain pair of pants made me look fat unless I wanted an honest answer -- so I assume others do, too. Most people, of course, know better.

Those three reasons probably account for maybe 75% of all the dumb things I say. The other roughly 25% are simply mistakes, usually just sloppy errors.

I usually know I've said something stupid the moment it's out of my mouth. Still, that's a second or two too late.

You'd think I'd learn from my errors. But somehow, I don't. (And how dumb is that?)

I suppose the biggest conclusion to be drawn here is that you should never, ever say anything in an effort to prove you're not boring, or are macho. And, tact is always a plus.

I don't think I'm alone. I've seen many smart people make unforced errors, if not quite as frequently as me. (I hope for their sake that they don't spend their lives the way I do, reliving their worst moments.)

There's not a day I don't do that. And that may may be the stupidest thing of all.

Looking at this post the next day, I see it's worse than introspective: it's navel gazing about my navel gazing.
Posted by John Craig at 5:55 PM 6 comments: