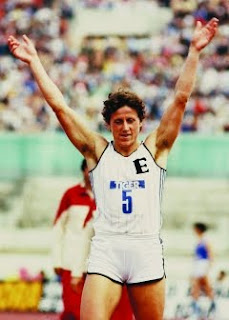 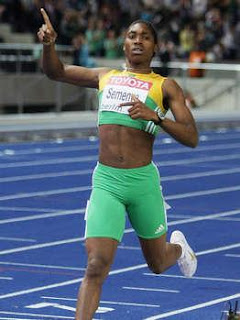 (Below, Caster Semenya of South Africa; on right, Jarmila Kratochvilova of Czechoslovakia, circa 1983)


There's been a fair amount of publicity over the last few days about Caster Semenya, the South African who won the women's 800 meter run at the World Championships in Berlin. It seems there is some question as to whether she is genetically a woman; she is to be tested by the authorities to determine her real gender.

This is evidently a less simple question than one would think, and involves opinions from geneticists and endocrinologists as well as a visual inspection by regular doctors. I once heard that one in 10,000 babies is born hermaphroditic; such babies are usually operated on soon after birth to allow them to identify one way or the other.

It seems highly unfair that Semenya should have to undergo this very public humiliation. At the very least, they should have conducted the tests privately, without fanfare. After all, no one is accusing her of cheating. If she is deemed not to be a woman, it will merely be an accident of birth, not a purposeful attempt to gain an unfair advantage.

If you find a very masculine woman viscerally off-putting (as I usually do), you should remember that she can't help the way she was born any more than the rest of us can.

(If the above paragraph sounds both trite and smug, that's because it, uh, is.)

There have been plenty of very masculine women who've succeeded in athletics in the past, and none in recent history (at least at the Olympic or World Championship level) have been forced to undergo such a public trial. This isn't to even mention the women who have become much more masculine through steroid abuse.

Jarmila Kratochvilova, the world record holder in the at 800 meters with a 1:53.28 (Semenya won with a 1:55.45), made Semenya look like Thandie Newton. Kratochvilova at her peak in 1983 could bench press 200 pounds, an astonishing feat for a female middle distance runner. Yet while people at the time wondered whether she was on steroids, no one ever forced her to undergo a humiliating genetic exam. (Or if they did, it was done out of the public eye.)

Semenya should be afforded the same courtesy.
Posted by John Craig at 12:54 PM