No redemption for Son 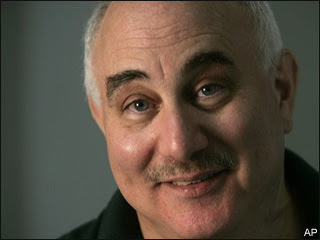 There was an article on FoxNews.com yesterday about how David Berkowitz, the infamous Son of Sam serial killer, will not seek parole when his next hearing comes up next year.

Gee, and he seemed like such a good bet to be released, too.

Okay, so this is not exactly big news. But people are always interested in hearing about famous monsters, and Berkowitz definitely fits that bill.

At the time Berkowitz was arrested, there was a lot of publicity about the fact that he claimed a dog (named "Sam") ordered him to kill people. That always struck me as a smokescreen, a setup for a possible insanity defense. He wasn't crazy, he was simply evil, which is why he took such pleasure in killing six people and wounding seven with a .44 handgun in 1976 and 1977.

I saw Berkowitz interviewed from prison on a TV show once. It was a shock to see him middle-aged and florid, but he spoke with complete confidence, like a glib salesman, and didn't seem crazy at all. In fact, he came across just like some investment bankers I've known.

Berkowitz wrote a two page letter to Fox News about how he had found salvation through Jesus Christ. It's always fascinating to me when sociopaths like Berkowitz claim to have found redemption. Yes, he has stopped killing people (though who knows what he'd be doing if he still had the opportunity). And he has found religion. But his basic psychology is the same: a sociopath simply never stops being a sociopath. (You are as likely to grow another head after the age of ten as you are to grow a conscience.)

So what we have here is a perfectly controlled experiment: a man whose sociopathy is not in doubt, but who claims to be a changed person now. (Sociopaths are always going on about they've turned over a new leaf.) So how does Berkowitz's sociopathy manifest itself nowadays?

"My job assignments are 'Mobility Guide' for inmates who are legally blind, and as an 'Inmate Program Aid' [sic] for the men who are mentally challenged. I also help out in the facility's chapel, where I assist in overseeing our Sunday services plus other services and Bible studies. My main activities are sharing my story of redemption and hope with those on the outside, as well as writing a monthly journal which can be viewed at Ariseandshine.org. I'm a hyperactive, always 'on the go' type person. But I've often been told that I do not take enough time for myself."

Okay, Dave, we get it: you're just too nice for your own good. (This is another sociopathic quirk, always telling you how good they are.) Note, too, that he now sees himself as a role model, an inspiration to others.

Berkowitz also said that he has found salvation because he knows that "Jesus Christ has already forgiven and pardoned me, and I believe this." But how does Berkowitz know this? How does he know that Christ is not in fact repelled by his self-righteous conversion? Does Berkowitz somehow have a direct pipeline to Christ?

Would the Son of God forgive the Son of Sam? It seems far more likely that Christ, or at least St. Peter, is planning to send him to Hell. (If Berkowitz isn't headed there, then hell doesn't exist, which means that much of Christianity is a sham.)

Berkowitz's religiosity is a little reminiscent of some televangelists who also claim to have a direct pipeline to God. (And yes, I've always suspected them of being sociopaths as well.) Many of them, while claiming to be filled with religious fervor, seem to exist in a state of feverish self-love, exuding pride at their own goodness. True goodness, of course, does not manifest itself with self-adoration. That is simply ordinary narcissism, a component of every sociopath's psyche.

Berkowitz has gone from sociopath-in-serial-killer mode to sociopath-as-man-of-God mode. Before he was giddy with his power (the power to kill people); now he is giddy with his own "goodness." The two kinds of giddiness are not as different as they might at first seem.

With all respect, you're wrong.

Sociopaths can change because sociopathy is not a mental illness but a psycholocgical situation due to past experiences that makes the person a sociopath. This condition can completeley change, so a sociopath can stop being a sociopath.

I think you wanted to mean "psycopath"; Is the psycopath who will die as a psychopath, with no possibility of redemption, cure or change.

Will --
Some people distinguish between "sociopaths" and "psychopaths", saying that the former is a socially derived condition and the latter i smote organic; but most use the words interchangeably.

I've been fascinated by/obsessed with sociopaths my entire adult life, and while I've heard of many sociopaths (and psychopaths) who have claimed to have changed, I've never seen one who actually has. Character and psychology are set at an early age.

Thomas Sheridan, author of Puzzling People, said that sociopath and psychopath are the same thing, but he prefers the term psychopath because 'paths hate that term.

Allan --
I agree, the two terms have alway been used interchangeably. I actually prefer "sociopath" because "psychopath" is too easily confused by most lay people with "psychotic," which has another meaning entirely (crazy). Of course, that's probably why sociopaths hate the term as well…..Almost makes me want to use it.

I don't know if anyone is still reading this thread. I am writing this in terrible dread. I wAs a sociopathic preacher. I was acting totally unchristlike behind the scenes until I was caught and exposed. Not until the. did I realize I had never been truly converted. That was 3 years ago. Since then I have frantically talked with every preacher, theologian and counselor I could out of fear that I am a false teacher. I could never find relief. I spend my time now on the Internet trying to find something that will help, but to no avail. I realize that I am a sociopath. I am terrified because I had much light (a Ph.D. in NT), and had ministered as an assistant pastor, bible college administrator and missionary in E. Europe and China. I maneuvered myself so that I would have high positions, which also resulted into much money, which I was dishonest about. I lied and told stories from the pulpit, and made merchandise out of believers in persecuted countries to enhance my position and wealth, while being very lazy in the Lord's work. I turned grace into license and became progressively more sensual to the point of a willful, deceptive affair. When my wife first confronted me, I lied to her and then to two pastors about it. Looking back, the only way I can explain it is that I am a classic sociopath. I now can't believe that I did all that I did without any pangs of conscience. I realize I never had the capacity to love or really have empathy toward others. I don't want to believe that I am an apostate, but everything fits. My heart literally feels hard and I believe I am now terrorized by many unclean spirits. I have already had one stint in a mental hospital and have lost my family. My wealth has dwindled to near nothing. I alwAys taught that the worst places in hell were for false teachers, but never dreamed that I was describing myself. I constantly look on the Internet for any glimmer of hope, but always come up empty-handed. I am living as a walking damned one. I can't believe I was so blind. The idea from Rom. 9 that God created me for this purpose is so hard for me to swallow. My wife on the other hand, whom I despised in my mind as too simple for me, always bore the marks of a true, spirit-filled believer. She is experiencing God's great blessing now (a d for eternity). I was proud; she was humble. We both proved whose children we really were. If anyone reading this could possibly offer any hope, I would be eternally grateful.

Anonymous --
There are only two possibilities here: either you're a sociopath or you're not.

If you actually feel as remorseful about your actions as you claim, then you're not one, and there's hope for you. (I'm speaking of "hope" in the religious redemption sense in which you are, even though I'm not religious myself.)

The other possibility is that you are a sociopath and are merely claiming to feel bad, or strongly exaggerating your slight feelings of regret, when you really don't feel that strongly, in which case your comment is just a bunch of malarkey.

It's one or the other. You have to take a hard look at yourself and decide which.

if you are really sincerely Christian, then from the point of view of your religion, it isn't too late to repent and be forgiven.

Remember the passage from Luke:

39 One of the criminals who were hanged there was hurling abuse at Him, saying, "Are You not the Christ? Save Yourself and us!" 40 But the other answered, and rebuking him said, "Do you not even fear God, since you are under the same sentence of condemnation? 41 "And we indeed are suffering justly, for we are receiving what we deserve for our deeds; but this man has done nothing wrong." 42 And he was saying, "Jesus, remember me when You come in Your kingdom!" 43 And He said to him, "Truly I say to you, today you shall be with Me in Paradise."

I think from a Christian perspective, if you accept Jesus as your savior and reform your bad behaviour, then you have hope.

You might not be able to change your psychological make up, but you can control your behaviour. From now on you should behave very well and avoid doing harm to others, including any kind of abuse, lying and cheating.

I would recommend not attempting to be a teacher in the future or seeking high office and instead try to remain humble.

Again, from the Christian perspective, everybody is offered the opportunity to be saved...Jesus died for everybody...and it isn't too late if you genuinely repent and reform.

Your improved behaviour serves as proof of the sincerity of your repentance and prevents the negative consequences of more bad actions.

I am not Christian but I would imagine that if you are and you are really so worried then these are the things to consider.