I'm just a normal guy, of average masculinity. Like most normal guys, I don't have anything against homosexuals -- I just don't want to be mistaken for one myself. I have been, in the past, and don't like it. I'm not sure if I find it more discomfitting when a gay guy mistakes me for one of the brotherhood and comes on to me (yecch) or a straight guy thinks I'm gay (and he thinks, yecch). Either way, it's an experience I prefer to avoid, so I take pains to come across masculine in every way I can, including the way I dress.

Luckily for me, Yoko Ono has come up with a new fashion line just for guys like me. Yes, that Yoko. You may think of her as the gold digger who ended up with John Lennon's fortune. But she is far more than that. She is an avant garde genius of fashion, who understands exactly how a guy like me feels: 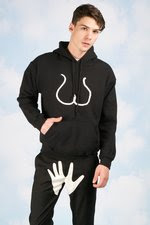 It takes a big pair of you-know-whats to wear this outfit in badass black. Don't believe me? Talk to the hand! 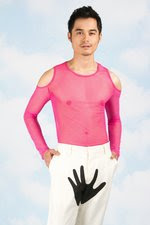 Nothing quite says "Get outa my way, I'm lookin' for pussy" like a shoulder-less pink mesh shirt. This look is undoubtedly big with the Seal Team Six guys on their days off. 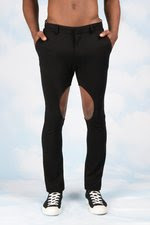 At first glance, those look like patches on the insides of the knees. But upon closer inspection, they turn out to be cutouts exhibiting bare skin. It's a pretty safe assumption that any guy who wears these is going to be so hypermasculine, the only question's going to be whether it's his balls or dick that'll be hanging out of those holes. 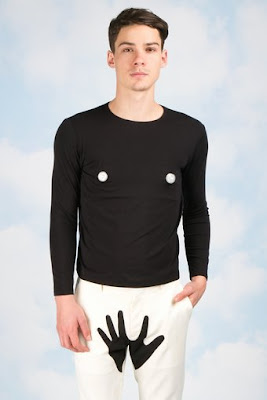 The best way to quietly growl "I have testosterone to spare" is with a nipple-emphasizing shirt. 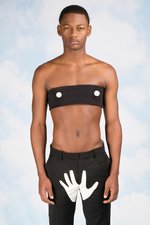 Okay, so this one is a tad on the feminine side. But look at it this way: you'll be going out the window and coming in the other side. Any man who wears a bra is practically roaring, "I'm so confident in my masculinity I don't give a crap what anybody thinks, you lily-livered, conventional, mincing little fairies!"

Let's say another guy on the football team has challenged you to a fight. Let's say you're supposed to meet him at the south parking lot at 3:45PM. Let's say you really hate this asswipe and want nothing more than to knock all of his teeth out, then stomp the little shit's face. And let's say practically everyone at school will be there, 'cause they all want to know who the numero uno alpha male at Central High really is.

The real question then becomes, what to wear? Yoko has come up with the perfect solution: 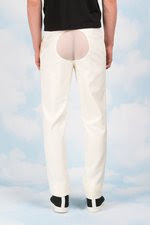 Okay, well, maybe I'm not being entirely serious. Maybe I wouldn't really wear these outfits to augment my masculine image. But there are other uses for them. For instance, if I ever get really furious at my daughter, I'll just wear the bum-less pants above when her friends come over. Think she'll die a thousand deaths?

I'm honestly not sure which I'd rather wear, that jar or these outfits.
Posted by John Craig at 10:52 AM

Why do you have to use that demeaning word "yecch"? It's extremely anti-gay. This is the kind of homophobic discrimination that gays always have to fight.

You bring up an interesting point. I was just being honest and describing my natural reaction -- should I try to hide that? (I've known a lot of other straight guys who react the same way, by the way.)

You constantly hear women say that they're "creeped out" by unwanted attention from guys, or that certain guys are "creepy," yet no one criticizes them for saying this. The only ones worthy of criticism in these cases seem to be the "creepy" guys. Why can't guys react the same way to such unwanted attentions?