Has anyone else noticed that John Kerry just looks different now? He's gone from this: 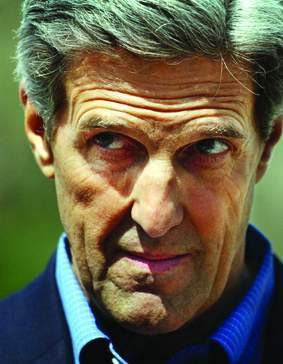 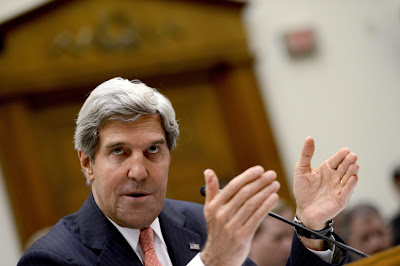 Actually, in the process of getting those pictures I saw that a lot of people have noticed: when you type "John Kerry" into Google Image, the first three things that come up following his name are "facelift," "plastic surgery," and "Botox." (That means those are the three most commonly searched queries.)

To me, it's a change for the worse. With those puffed out feminine cheeks he looks less masculine. He looks less tough. He even looks less intelligent somehow.

(In the shot above, he looks like Grandma Kerry showing how big Grandpa Kerry's member used to be.)

I can't imagine his plastic surgeon is going to be displaying those before and after shots as one of his success stories in an effort to entice new customers.

What exactly was Kerry hoping to accomplish with that surgery? He always wanted to evoke the Kennedy's; he still does, although he now resembles late stage Teddy more than any of the others.

The one good thing he has accomplished with the surgery is that he looks less conniving. Before, he looked like the most evil, duplicitous, schemer who ever lived. He could have been picked by Central Casting to play Iago, or Machiavelli, or any number of want-to-take-over-the-world-type villains.

But wouldn't it have made more sense to get surgery before his Presidential run in 2004? It's not as if he's ever going to run for elective office again.

Could it be that as Secretary of State, he now wants to put foreign leaders off their guard? His previous face was certainly enough to scare anyone. (Though the new one is just as scary, in a different sort of way.)

The larger question is, what does this surgery say about Kerry? The first thing it says about him is that he's a liar, since he denies having had any work done. (He's literally now a big fat liar, with that face.)

It's a mystery to me.

All I know is that every time I see him on TV, I find it hard to concentrate on his words, and just find myself staring at his face.

If I were interviewing him, I'd probably say, "Okay, okay, go ahead and bomb Syria -- but what the hell happened to your face?!"
Posted by John Craig at 11:59 AM

Yeah Kerry's face has definitely taken a turn for the worst. Whatever 'work' done on his face has given him a swollen, smoothed-out granny appearance. From what I've read about Kerry over the years, he's an extremely vain and self-righteous man, so it doesn't surprise me that at age 69, he's went under the knife.

I think in some folks plastic surgery has helped their appearance. But for a lot of people, however, it gives them an odd, slightly unnatural look - even when it's supposed to have turned out 'good.'

I have to say there's something attractive about men and women who age gracefully that's much more appealing than older folks propped up with Botox and bloated lips, etc.

Ambrose --
Agreed. Given that Kerry almost undoubtedly married Teresa Heinz for her money, and given how much she's got, you'd think he could have afforded a better plastic surgeon.

As far as his character, any guy who marries for money -- especially when he's already well-to-do -- well, that tells you pretty much everything you need to know.

And yes, some people get good results and some bad from plastic surgery. This is one of the latter cases.

I feel it is very possible that Kerry was on the level when he said has not had any plastic surgery. What if Kerry has a medical condition that is causing the bloating in his face? What if he is taking meds to treat a malady? Some steroids for example have a bloating side effect similar to what we see in Kerry.

Careful before jumping to conclusions!

Michael --
So now you're accusing him of taking steroids? Who's jumping to conclusions now?

Seriously, I've seen people on cortical steroids with bloated faces, I know how that works. But Google "John Kerry's face" and you'll see a more complete story. Various plastic surgeons have been interviewed who say the lack of movement in his face now s typical of Botox. And there are pictures of him from when he showed up at the White House in 2012 with two black eyes; his press agent said it was a hockey accident, but it seems highly unlikely that both eyes would be blackened to exactly the same extent (there are plenty of pictures of him then).

Actually, he basically looks like a male version of Joan Rivers minus the duck lip fillers

Anon --
But ironically, Rivers is funny because she tells the truth. All Kerry does is lie, and he's not funny at all.

I wonder what his wife sees in him? Why do women want to be with these men who lack true character?

Birdie --
I guess Teresa Heinz was susceptible to the full court press he must have put on to win her. Plus he IS a senator, which she seems to have a thing for (her first husband was one too).