Three posts ago I mentioned that Melba Ketchum, the sasquatch hoaxer, was most likely a sociopath. Another blog, Top Secret Writers, has provided some background on her business dealings.

Ketchum's company, DNA Diagnostics, has an "F" rating from the Better Business Bureau:

The Bureau provided 16 factors in providing the worst business rating possible, not the least of which included accepting payment from customers without providing sufficient or any DNA results in turn. In most cases, Ketchum failed to respond to the Better Business Bureau’s investigations.

She had also founded a company called Biogen Diagnostics, which is “not in good standing with the State of Texas”.

In 2010, Ketchum had partnered with Robert Schmalzbach and Richard Stubstad in a business called Science Alive, LLC, where they originally noted a “statistical anomaly in mitochondrial DNA results”. Ketchum went on Coast to Coast in 2010 to call for more Bigfoot samples and made claims about Bigfoot which Schmalzback felt was premature. She disagreed with him, formed her new company, and cut Stubstad and Schmalzbach out of the loop. (This of course contradicts Ketchum’s claim that she never “went after” Bigfoot samples).

A record of dishonesty and disloyalty and irresponsibility like that usually spells sociopathy.

I was also struck by Katchum's picture: 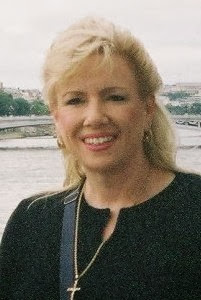 You can ignore the dyed hair and bright red lipstick; these are, if garish, not uncommon. She has the "nothing behind the eyes" look that sociopaths are often said to have, though in this case that could be a function of this particular photograph. Another layman's expression for this is, "a smile that doesn't quite reach the eyes;" that seems to be the case here, too.

But most telling is Katchum's cross. Most people who wear crosses tend to have a small cross on a thin necklace which they usually wear discreetly behind their shirt. Anybody who wears a fairly large cross on a longish gold chain on top of her shirt is generally advertising her Christianity -- her "goodness."

And there's no one who advertises her "goodness" more than a sociopath.

On both of these counts -- the blank eyes and the advertising of Christianity -- Ketchum reminds me of Karen Sypher, the sociopath who tried to extort $10 million from basketball coach Rick Pitino: 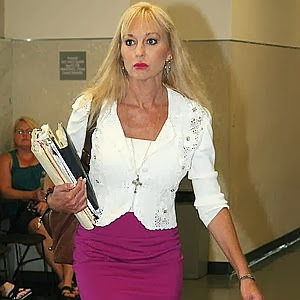 (The two women also share the same taste in hair dye and lipstick, although these are, as I said, incidental.)

Beware of those who brandish their religion like a shield, against any suspicion that they themselves might not be above reproach.
Posted by John Craig at 11:12 AM

I don't trust anyone who carries a Bible in public.

Bob --
Good philosophy. Reading it is one thing, brandishing it another.

Considering where her golden cross is situated, it looks like she is advertising her tits more than any inner qualities.

Anon --
Could be she's advertising both.

Of course she's advertising both tits. That's sort of implied.

You know what I meant!

John, in case you hadn't seen it yet, there are some insightful YouTube interviews of Richard Stubstad (before he passed away) on how he came to believe in the existence of Sasquatch. He also talks about Melba Ketchum's DNA results.

Stubstad's quite a smart guy, and it was the strength of the evidence alone that persuaded him that Sasquatch was real. He also seemed to be a genuinely humble and gracious man - unlike Melba who seems to find it hard to get along with almost everyone who crosses her path.

Along with Melba wearing a large cross, she apparently included some biblical references to Sasquatch in her DNA study which was another reason why so many scientists had problems with the research paper she submitted for peer review.

Ambrose --
Thank you, I'll take a look at Stubstad's video in the near future.

It's unfortunate that the whole Bigfoot phenomenon attracts so many hoaxers, but that seems to be the nature of the game right now.

Okay. Whose the Jew pig writing this nonsense?