It just struck me whom Donald Trump, with his blond eyebrows and supercilious expression -- 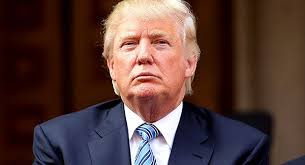 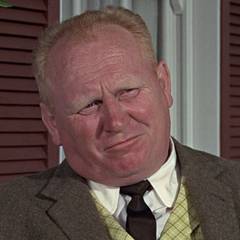 The resemblance is more than physical.

Both men revel in their wealth, in fact boast of it. 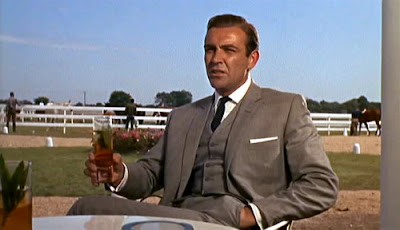 But Trump has Mar-a-Lago: 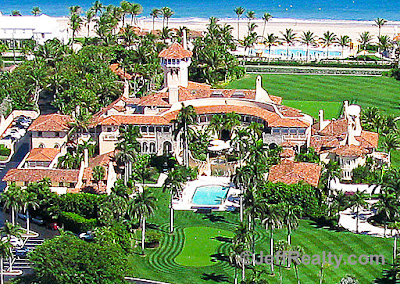 When James Bond asked Goldfinger what the golf club secretary would have to say about Goldfinger's having ordered Oddjob to decapitate a nearby statue, Goldfinger replied, "Oh nothing, Mr. Bond. I own the club." 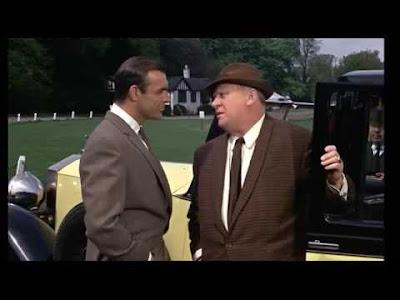 Trump can say the same, three times over. The Trump Organization owns and operates the Trump Turnberry hotel and golf resort in Scotland, the Trump National Doral in Miami, and the Trump International Golf Links in Ireland. 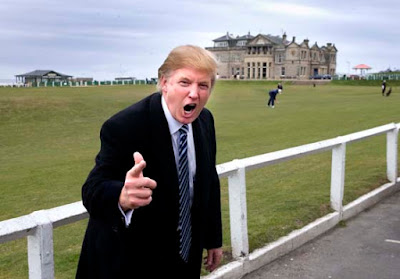 (Whether Goldfinger was vain enough to name his golf club after himself is not known.)

Goldfinger showed absolutely no respect to Bond, despite Bond's heroic service to his country. 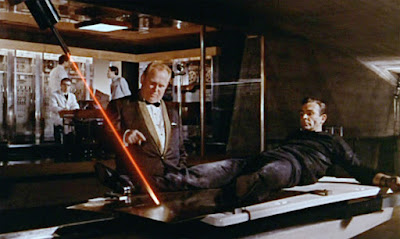 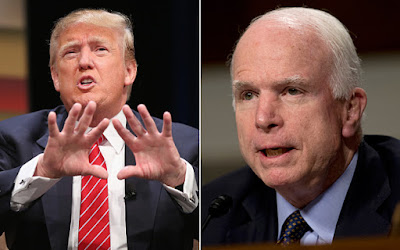 When about to be disemboweled by that laser, Bond asked Goldfinger if he expected him to talk. Goldfinger replied, "No Mr. Bond, I expect you to die!"

Trump has been similarly blunt about an entire class of people: illegal immigrants. (If you prefer, you may substitute the word "honest" for "blunt.")

Neither man is exactly a feminist. Goldfinger liked to surround himself with beautiful women, including Jill Masterson (whom he later had painted gold) -- 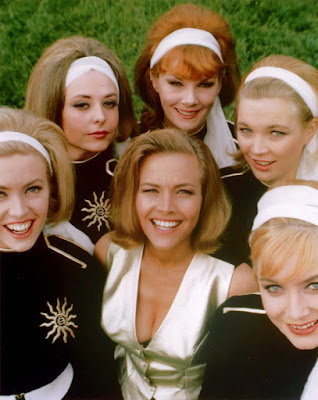 Trump also seems to view beautiful women purely as decorative objects to surround himself with. He owns not only the Miss Universe pageant -- 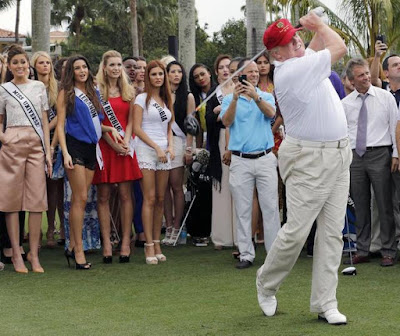 -- but the Miss USA pageant as well: 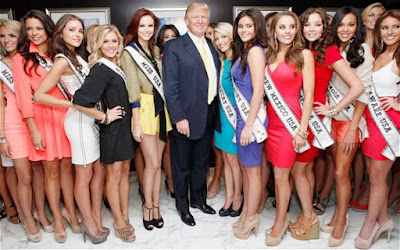 (Should Trump get the Republican nod, don't expect any of that "two for the price of one" nonsense about him and Melania.)

But, there are differences as well. Goldfinger was never called "the Auric." He never spoke of himself in the third person. And there is no indication he ever thought he should be Chancellor of Germany.

Goldfinger was actually, by comparison, a humble and self-effacing man.
Posted by John Craig at 10:16 PM

But Trump is missing a trick here - as your link to the Goldfinger movie theme suggests. He could do worse than hire John Barry for the job. If it was me I'd choose lyrics along the lines of "Thunderball":

He always runs while others walk.
He acts while other men just talk.
He looks at this world, and wants it all,
So he strikes, like Thunderball.

He knows the meaning of success.
His needs are more, so he gives less.
They call him the winner who takes all.
And he strikes, like Thunderball.

Any woman he wants, he'll get.
He will break any heart without regret.
His days of asking are all gone.
His fight goes on and on and on.
But he thinks that the fight is worth it all.
So he strikes like Thunderball.

But I'm afraid you lost me at the first lyric: he always runs while others walk. If I can refer you to the picture of the MIss Universe contestants enjoying the privilege of watching the Donald tee off, you'll see he's too fat to run. So, I'm sorry, but I don't buy it, even if some of the other lyrics apply.

Plus he looks more like Auric Goldfinger than Emilio Largo.

Here is a movie about Jeb:

Here is a movie about Hillary:

Allan --
Ha! Very good. It's actually been sort of fun to watch Jeb try to lose weight during this campaign, so he looks less like the Blob. And Medusa (or "Megorra," which I guess is the Irish version), perfect for Hillary. She does seem like a shrieking Gorgon at times with that phony cackle-like laugh of hers.

If Trump cuts the right people in half with lasers, I'll pay money to watch it!