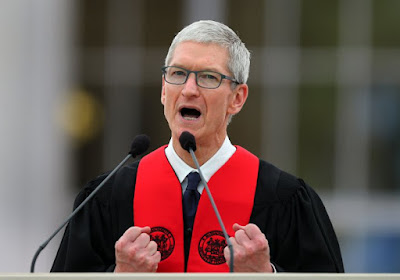 “Whatever you do in your life, and whatever we do at Apple, we must infuse it with the humanity that we are born with.”

“I’m more concerned about people thinking like computers without values or compassion or concern for the consequences. That is what we need you to help us guard against. Because if science is a search in the darkness, then the humanities are a candle that shows us where we have been and the danger that lies ahead.”

“The internet enabled so much and empowered so many, but it can also be a place where basic rules of decency are suspended and pettiness and negativity thrive.”

“Don’t let that noise knock you off course. Don’t get caught up in the trivial aspects of life. Don’t listen to trolls, and don’t become one. Measure impact in humanity; not in the likes, but the lives you touch and the people you serve.”

These are all noble-sounding, "uplifting" sentiments, the type you'd expect at a college graduation. But any honest appraisal of Cook's career would have to center around the fact that his rise was facilitated by having been Steve Jobs' right-hand man. And Jobs was an obvious sociopath.

After listening to that speech, it's hard not to wonder exactly how Cook helped enable Jobs to be the incredibly nasty and self-serving bully that he was. Did Cook ever lecture Jobs on how he should be a better person?

One does not become a right-hand man and heir apparent to the CEO without flattering, catering to, and making oneself constantly available to him.

Apple assembles its iPhones in China so that they can pay their workers less than they would have to in the US. How does Cook not consider that to be behavior "without values or compassion?"

Some of those laborers have been as young as 14, and several lawsuits have been brought alleging poisoning of workers from the hexane used to clean iPad screens, as well as overwork from up to seven day workweeks. Is that what Cook considers infusing his plants "with the humanity we are born with?"

Apple also keeps a large chunk of its huge cash hoard abroad so that it doesn't have to pay US taxes on it -- taxes that would help pay for Social Security, Medicare, and Medicaid. Not only that, Apple has routed as much as one-third of all its worldwide revenues through Ireland, where it pays a 2% tax rate. How does Cook square that with the "basic rules of decency?"

Cook was theoretically selected as the graduation speaker because he's someone whose success the current crop of graduates would like to emulate. So rather than high-flown sentiments, some of them were probably hoping for a few insights along those lines.

A more honest speech about how Cook became so fabulously wealthy would have outlined how to kiss ass, how to enable a sociopathic boss, how to avoid paying taxes, and where you can get the cheapest labor.

I don't hold it against Cook that he does his job as a CEO. But let's not lose sight of the fact that a CEO's job is to make as much money as possible for his shareholders, his employees, and himself -- by any means he can.

What I do hold against Cook is the sanctimonious front he puts up. (Although, in all fairness, that's probably part of a CEO's job as well.)

Note that Cook also did his job as CEO by telling the grads that they should "measure impact in humanity; not in the likes, but the lives you touch" -- that snide reference to "likes" being a little dig at crosstown rival Facebook.

It's a little surprising Cook didn't warn the graduates about "the googolplex of obstacles" they would have to overcome in life.

Anyway, you should now be ashamed of yourself, because you have just done what Cook advised you not to: you listened to some of the "negativity" on the internet - from someone Cook would undoubtedly call a "troll."

But you also just got a dose of reality, since I don't have to put on a false public face. And what some call "negativity," others call truth.

Here's my advice to those MIT grads: any time you hear an "uplifting" message from the likes of Cook, just remember that old adage about actions speaking louder than words.
Posted by John Craig at 11:01 AM

I don't blame Apple and Microsoft for taking advantage of obvious tax loopholes, I blame the pols for making the laws and the electorate for not kicking them out.

Anon --
I actually don't even blame him for exporting jobs; it's his job to get labor as cheaply as possible. For that, too, the blame lies with the pols for facilitating that, and with the electorate for not understanding the issues involved.

Sadly, success is about saying the right thing while covertly fueling one's own
selfish interest. It's a choice one has to make and I wish I had known earlier that high
morals take you nowhere. The road to success is hypocrisy and cunning.

You're absolutely right. Nice guys who work for big corporations inevitably find that out. Sociopaths rule.

CEO's, Actors and Politian's - It's all a form of marketing / branding.

I guess I can't blame them - I should have my own branding and network campaign going.

GT --
It does seem to be part of their job description. But that doesn't keep the hypocrisy from reeking.