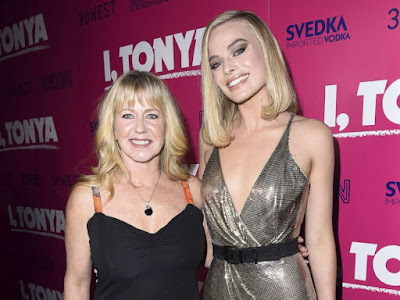 It's been pretty sickening to watch the Hollywood-ization of Tonya Harding.

I haven't seen I, Tonya, and don't plan to, but from what I've heard, it's a complete whitewash of its subject.

I had no doubt back in 1994 that Harding had played a role in planning that infamous knee-capping incident, and have no doubt now.

The main reason I came to that conclusion is that she's such an obvious sociopath.

Harding could cry on command, and would do so at parties to entertain people. This is a sociopathic specialty. Harding employed that skill when she asked for a do over at the 1994 Olympics, claiming to the judges that the laces on her skates had broken. (They relented.) 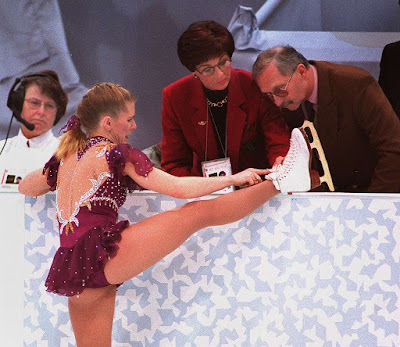 Much of Harding's behavior could be described as uninhibited, reckless, and shameless.

In 1995, Harding married Michael Smith; that marriage ended in 1996. (A short marriage is obviously no indication of sociopathy, but multiple short term marriages tend to be a yellow flag.)

In 2000, Harding was arrested by Portland police for throwing a hubcap at the head of then-boyfriend Darren Silver's head. She spent three days in jail for this.

A few days ago, Harding was dumped by her agent/publicist Michael Rosenberg for having demanded that journalists who wanted to interview her about the movie not be allowed to ask about her past, and have to pay a "fine" of $25,000 if they did so.

How did Harding get to be this way? The Early Life section of her Wiki bio merely states:

Harding had a troubled childhood. She said that by the time she was seven years old, her mother had mentally and physically abused her.

The movie evidently tried to portray Harding as a victim of her background. That is, in a sense, true. But just about every sociopath is a victim of a loveless, and possibly abusive background.

It would probably be more illuminating to say that such people are products of their backgrounds, rather than victims of them.

From what I understand, the real Harding bears about as much resemblance to the character portrayed in I, Tonya as she does, looks-wise, to Margot Robbie.
Posted by John Craig at 12:12 PM

I didn't know that Tonya Harding was a sociopath until I'd seen it mentioned somewhere on this blog. When I saw Tonya interviewed on an ABC morning show, she didn't come across as a likeable person. She's rough around the edges and hasn't aged well. Apparently, Tonya is onto her third marriage. She has a son with husband number three. Hopefully, her child will grow up to be a semi normal person. This movie wouldn't be one that I would ever be interested in seeing.

Birdie --
I don't hold it against her that she's rough around the edges; a lot of us are, and that's not necessarily reflective of character. I use bad language, I'm sure some hold it against me, and consider me rough around the edges for it. But kneecapping an opponent, that's a whole other thing. There are plenty of people who come from poor backgrounds who are perfectly fine people, and it would never occur to most of them to do something like that.

I'm glad you said "yellow flag" and not red for having had several short-term marriages. It's one of those things that could be a sign of sociopathy, but isn't necessarily - like fussy eating and autism.

Gethin --
Yes, definitely not a red flag. But one of those things you tend to see more often with sociopaths.

Johnny Weir has tweeted against this. He's shown some manhood here.

Where did you read that Tonya could cry on command? That's an interesting fact.

Anon --
I read that a long time ago, around the time of the incident, but it stuck with me. When I Googled it right before writing this post, I couldn't find it. But I definitely read it.

I was happy to see what Johnny Weir said, too. I have to think everyone in the figure skating community has to be a little bit sickened by the movie.

I believe you about the crying. I never thought of it before but it really is a disgusting "ability".

I'm just so revolted by everything that Hollywood produces nowadays, and I know that sounds cranky, but what can I say. I think the whole place should sink in a mudslide. To think that Hollywood once produced great actors like Jimmy Stewart, Burt Lancaster, Bette Davis, and made great movies.

Gone with the wind.

Anon --
When you think about it, Harding's ability to cry actually makes her a better actress than a lot of actual actresses. If she'd been better-looking, she could have been a femme fatale, albeit a dumb one.

Ha, gone with the wind is right.

Though, now that I think of it, I've seen a fair number of recent movies I've liked. Can't list them all, but there've been plenty. I suppose what I object to is the constant propagandizing that comes along with most of the movies, even the good ones.

I just came across this - look on Youtube for the first few minutes of the movie Idiocracy. Tonya Harding is at 33 seconds - to illustrate dysgenic evolution!

Anon --
Just checked it out. Is that her flexing her arms as a boxer? You're right, she's well cast.

Thank you for the post! My reaction to the movie (which I have not seen and do not plan to, either) has been WTF??!! When the incident happened back in 94, it was a scandal. No one was angling to present Harding in a sympathetic light at the time, because there was zero sympathy to be extracted from such a thoroughly depraved and degenerate act of, yep, sociopathy. Whatever inspired the resurrection and whitewashing of this particularly ugly event is beyond me. Of all the things that could be resurrected, why this?

Since writing this post I've actually thought about exactly the question you ask: of all the things that could be resurrected, why this?

If Hollywood wanted to, they could make movies about Pat Tillman, or any of the recent Medal of Honor winners, etc. But, they'd prefer to publicize Tonya Harding, who to most people is the epitome of white trash, and, to you and me, a sociopath. It's almost as if they made this weak attempt to "redeem" an irredeemable person just so that most people would react as we have: WTF?? It's hard not to suspect the usual ethnic/political agenda. On the other hand, the driving force behind the movie seems to be Margot Robbie, an Anglo Australian: she executive produced as well as starred in it, and she's too young to remember the original incident. Is she that misinformed? Or did she simply think this would make a good drama? I don't know.

In this case, it's a class agenda, along with sex/gender. We're supposed to feel sorry for poor widdle oppressed Tonya. There was always that sub-current or whatever you call it. Nancy Kerrigan - what a stuck up bitch. (She was just as working class as Harding, by the way. And there were troubles in her immediate family. But she surmounted them.)

Hollywood doesn't do movies about admirable people anymore. They are quite simply a bunch of sociopaths.

BTW as the subject is figure skating and you are a connoisseur of human oddity, read this:

I liked Debi Thomas a lot. Sad to see what happened to her.

Anon --
I heard that was the way things were portrayed in the movie, with Kerrigan shown as a stuck up prig, but I don't think anyone who was around during that era remembers things with anybody but Harding as the villain.

Wow, Debi Thomas! I had no idea about that. I remember her as being such a shining example of all-around accomplishment: the figure skating world championship, Stanford, becoming a doctor, and so on. I couldn't get onto that Post link you sent, I refused to pay to read it, but did read her Wiki biography. I was half-expecting to hear that she had been driven into bankruptcy by a malpractice suit or something, but it wasn't that; it was more as if her practice just petered out. I wonder why she didn't renew her medical license. She must have worked hard to keep her bipolar disorder under control when she was young; I guess it would explain the divorces, but still, yikes. That's awfully tough, and sad.