The NY Post just ran this article about Reeaz Khan: 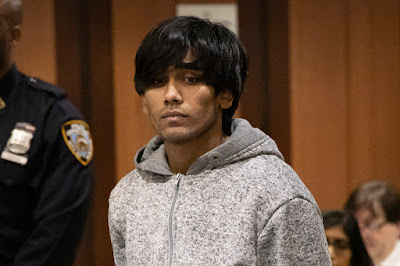 The man accused of sexually assaulting and killing a 92-year-old woman in Queens claimed to cops that he's been trying to help the old woman -- but then he lost his balance, his belt broke, his pants fell down and his genitals accidentally came in contact with hers, it was revealed in court Friday.

The suspect, 21-year-old Reeaz Khan, told detectives that he found the woman, Maria Fuentes, on the ground near Liberty Avenue and 127th Street in Richmond Hill at about midnight on Monday and tried to help her, a prosecutor said at his arraignment on Friday.

Khan told detectives, "He fell down, his belt broke, his pants fell down and his penis fell near her vagina," the prosecutor, Joseph Grasso, said in court.

At that point, something came over him, Khan claimed.

"Defendant then stated that he did lift up her skirt and he tried to put his penis inside of her," the prosecutor added.

Sources previously said that Khan admitted to suffering "uncontrollable urges," and said that this was the first time he acted on them.

Khan is good-looking, though he's more pretty than he is handsome. Once he's in prison, some bigger, burlier inmate will undoubtedly notice this. Maybe, just maybe, while trying to help Khan, such an inmate will lose his balance, his belt will break, his pants fall down, and his genitals will accidentally come into contact with Khan's anus.

And then, who knows what kind of uncontrollable urges the inmate might feel?

Obviously, any sympathy for Khan at this point is misplaced. But I can't help feel a little sorry for him, given the bleak future he faces.

His best strategy at this point would probably be a not-guilty-by-reason-of-insanity plea. That wouldn't be entirely unjustified: you'd have to be crazy to think anyone would believe that explanation.
Posted by John Craig at 10:46 AM