When I was growing up, I occasionally heard about what a genius I.M. Pei was. Yet whenever I saw pictures of his buildings, I could never figure out why.

Pei is probably most famous for this glass structure which he designed to be placed in the center of the Louvre, in Paris: 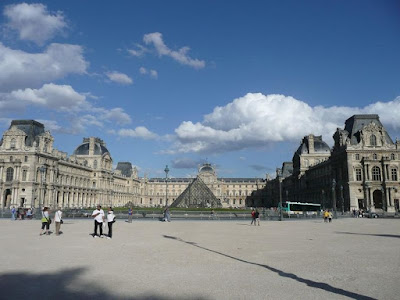 Another of Pei's famous designs was the Luce Memorial Chapel in Taiwan: 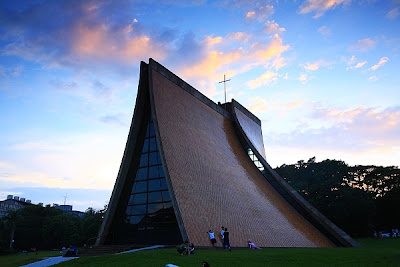 It does have a vague resemblance to the top of a traditional church. But it bears a closer resemblance to a Dairy Queen with wings. Or perhaps a Swiss ski chalet after a nuclear meltdown.

This is Pei's National Center for Atmospheric Research, in Boulder, Colorado: 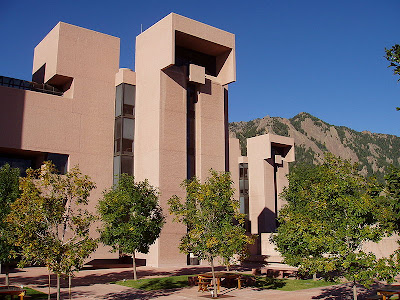 Pei evidently said he wanted the building to "look as if it were carved out of the mountain." Well, judging from the scarcity of windows (they would have interfered with his Cubist design), it probably is as dark as a cave in there.

According to Wikipedia, Pei considered the John F. Kennedy Library "the most important commission" of his life: 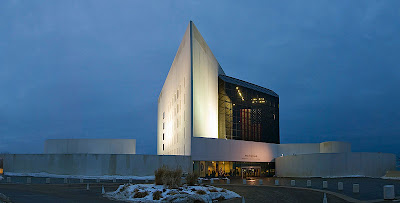 It is amazing how closely it resembles a terminal at JFK (the airport, not the library). 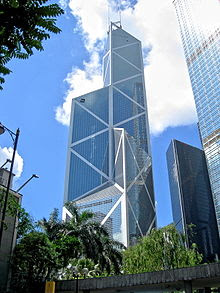 According to Wiki, Pei felt that it "needed to reflect the aspirations of the Chinese people." All tall buildings bespeak a certain ambition; but if you look closely, you can see that this one at least reflected the building next door.

This is the Pei-designed Dallas City Hall: 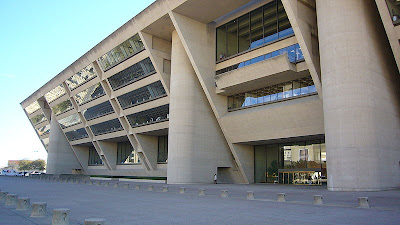 Pei wanted this structure to "convey an image of the people." If this building is an image of a person, then it's one who can't keep his balance; perhaps Pei was making a sly comment about Texans' drinking habits.

Modern architects speak a high-falutin' language which I don't seem to understand.

Pei also designed the Woodrow Wilson school at Princeton. It does look lovely from the outside.

Unfortunately, it looks awful from the inside.

Jon --
It looks as if it's supposed to be an updated version of the Parthenon. But, like all of his buildings, it's designed to be a statement about Pei rather than a livable, workable space. Pei is a modern artist masquerading as an architect, and he disguises that fact with high flown statements like the ones I quoted in the post, for instance, about how a certain building is supposed to be an image of the the people of Dallas. It's a little like the way a scoundrel hides behind the flag: if you dislike my design, it means you dislike the people of Dallas. The thing is, all of those buildings are nothing more than monuments to himself. If there aren't enough windows for the people on the inside to get natural light, tough.

WWS always felt somewhat Islamic to me - like the HQ of a Middle Eastern corporation with its flashy pool and fountain, sitting incongruously beside the Gothic faux Brit of the main campus. No inspirational Doric vibe here.
G

G --
I'm sticking with the fake Parthenon motif. Blending in with the surroundings was never a motivation for Pei; he always seemed to want to just stand out as much as possible, to make as big a splash as he possibly could, which he figured (rightly) would augment his reputation the most. And to forestall critics, he would hide behind all that bs about how his buildings were monuments to the people, etc.

I used to hang out quite a bit at the WWS, and it didn't feel Parthenon at all: columns too spindly rising to meet in almost an arch at the base of the top floor. Not nearly enough solidity, strength and squareness for a Parthenon. And the fountain!
G

Well, you've got me there; I've never seen it in person. But from the proportions in the picture Jon linked, the amount of roof/"attic" area vs. the amount of side area seem to be similar.

There are good architects and good buildings but it's a profession, like other design professions, that lets its practitioners get away with all kinds of self-indulgence and pretension. I didn't read The Fountainhead but I was forced to watch the movie, which in part is about an architect who, having learned that a building he designed wasn't build exactly according to his design, tempestuously blows it up. Right, as if the person or company that commissioned the design and put up the money for it has no say over what the final building looks like!

You see the same thing in advertising. Some of the people who work in that field see themselves as artists, and lose sight of the fact that they're tradesmen.