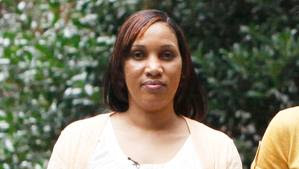 I was reluctant to label Dominick Strauss-Kahn's accuser a sociopath based on what I read this morning, but Steve Sailer just quoted a letter from the DA's office to the woman's attorney which makes me comfortable promoting her from the status of prolific liar to pathological liar. The relevant excerpt:

Additionally, in two separate interviews with assistant district attorneys assigned to the case, the complainant stated that she had been the victim of a gang rape in the past in her native country and provided details of the attack. During both of these interviews, the victim cried and appeared to be markedly distraught when recounting the incident. In subsequent interviews, she admitted that the gang rape had never occurred.

That's pretty much all you need to hear. Crying on command is a sociopathic specialty, and false emotionality is also a hallmark. The only people who can fake tears that well are sociopaths.

I have no problem showing Diallo's picture above.
Posted by John Craig at 6:32 PM

A bad Muslim woman would have left a bomb in his room.

This is not the correct photo

Really? There were two pictures that came up when I Google Imaged her, and it's true, they didn't look alike. I'll look again, thank you.

That is not the right photo. It is libellous.

It's strange, there are two photos circulating of her, and this was the more common one at first. But now the other one (which I am about to put up) is more common, so I'll change it to that. The two photos are obviously of different women. I'll also take out that line about how her angelic looks are misleading, because this one is not as good-looking.