What's up All. My name is Antezz Dieffenderfe. I'm 22, B-Day July 4. I'm from Knoxville, TN so first off, I made a big mistake 16 that I have to live with for the rest of my life, yeah, rape, besides that, I'm a good man, down to earth, funny, and business minded. So I love white girls. I'm looking for woman to write this time. So we can ride out when I get out. I'm looking for someone between 21-29. Well till then, keep your head up. Please send pics. :-)

Google Antezz and you'll find, first, that his first name is spelled with just one "z." Secondly, you'll see that his crime was that between November 2007 and January 2008 he had incestuous sex multiple times with a family member whom he knew was "mentally defective and physically helpless."

Antezz was evidently a standout defensive end for his high school in Knoxville, Tennessee. He also wrestled and ran track. As you can see from the picture above, he has the mesomorphic build of a natural athlete. He evidently has the sex drive of one too. You have to be pretty driven to have sex with someone who is in a semi-vegetative state.

Antezz points out that he loves white girls. But if he had sex with a family member, he must like black girls too. 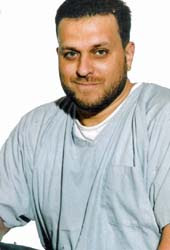 I am a 40-year-old heterosexual single male at Lois Deberry special needs facility in Nashville,TN.I have been incarcerated for the past fifteen years and feel lonely and disconnected from the rest of the world. I am a sensitive, caring and kind person who is seeking a female penpal who can relate to me and my circumstances.....Hope to hear from you soon.

I was initially drawn to Flake's ad simply because I thought he looked evil. He also had that usual telltale sign of sociopathy, talking about what a "sensitive, caring and kind person" he is.

Flake didn't list his crime, but did say in his ad that he was serving a life sentence. That usually means murder of some sort, and when I looked him up, sure enough, he had shot two people to death. He didn't seem to have any strong motive for his crime, which makes it sound even more sociopathic.

Flake had a gambling problem, which often spells sociopathy (most people with the usual level of inhibitions don't become "addicted" to something which isn't really all that addictive). And he was an alcoholic and drug addict, things a sociopath is more likely to become.

Finally, it sounds as if Flake pretended to be crazy in order to mount an insanity defense. Feigning schizophrenia has all the hallmarks of sociopathy: it is dishonest, it is a play for sympathy, and you only do it when you've done something dastardly for which you're trying to avoid blame. The jury saw through his insanity defense, hence the life sentence.

Another striking thing that came out during Flake's trial (linked above) was that he feared homosexuals, since he was somewhat confused about his own sexual identity. And he hated one of his victims since the victim seemed effeminate and touched him. Note the ad above: "I am a 40-year-old heterosexual single male..."

Most heterosexual single males don't feel obliged to point their sexuality, especially if they already said they want to correspond with women. Everything about Flake seems to be a lie, but that is often the case with sociopaths.

John Fratus (assault with a gun)
I am looking for the woman of my dreams. I keep dreaming about you. In my dreams we are together spending time, chillin, together, kissing, hugging, getting freaky, just being with you spending time just to be with you it feels so good like heaven ecstacy words can't describe the way you make me feel when I'm with you just being in your presence it feels so real. It's like a high I never want this feeling to stop. I never want this dream to end then "BOOM"!! I wake up in a cold dark lonely prison cell all by myself...I am a 32-year-old White and Puerto Rican young man in California prison for allegedly shooting somebody with a gun but he didn't die, it's only assault....I've been in prison for 7 1/2 years. I have a real good chance of getting out on my appeal in the near future. I'm hoping to find a female from California who will be close enough to visit. I can always try to get a transfer closer to you. We can do a lot on visits.I'm single, I'm sincere, honest, good personality, love to have fun, attractive, athletic, good lover, good friend to have. I can rap, sing, dance....

Fratus doesn't pretend to be romantic, he just wants a woman to get freaky with. But he does set up some pretty high expectations for this woman of his dreams. (Wouldn't a woman find that a bit intimidating?)

It's not clear why Fratus wrote "allegedly" in his ad: if he didn't shoot anybody, why would he bother to add that the guy didn't die?

Verdict: probably a sociopath, given his completely uninhibited, impulsive nature and his talk of how he is "sincere, honest, [and has a] good personality."

Hafford didn't include any copy with his ad, just an address, but he is interesting for two reasons. First, his pictures shows him posing with two poodles and a Cairn Terrier. He's cuddling the Cairn, evidently to show what a nice, affectionate fellow he is.

Hafford listed "women" as his desired pen pals. But if you look him up, you'll see that he is in for having murdered Theresa Rafferty in a five minute attack during which he used a knife, shovel, and ice chopper to inflict more than 60 wounds on her.

I know it has been some years since you actually wrote this, but in my defence I only discovered it earlier in the week. Mr John Craig - I salute you. That was the most amusing blog I have ever had the privilege to read. I am now a devoted fan.

Jasmin --
Thank you very much, you're very kind. I hope you find the more recent posts amusing too, there are plenty of posts I've written since this one.

I would really like to know where you found the post Antez Diefenderfer allegedly posted somewhere. It seems here he admitted to what he did here but Im hearing a different story from him. I'd like to find out if someone pretended to be him and wrote this or he actually wrote this so I can confront him about it.

J --
All of the Prison Penpals ads I liinked in that post are for some reason are no longer available, I just tried clicking on the links for them and they no longer work. However, if you click on the other link in that segment on him you'll get this article, which corroborates what I said about his crime:

^ I think I've found a classic sociopath here. "sophisticated gentleman that is highly respected", "unfortunately I have had my share of issues...but my Morals, Principles and Values", "I cannot stand a liar or a person that is disloyal", "missing out on connecting with a guy of my caliber". Need I comment?

As for this guy:

"Very respectful love to treat everyone with respect", "I like to do humanitarian kinda things.", "Im not trying to con or manipulate anyone for nothing"

Interesting choice of words: "for nothing"; implies he *would* con and manipulate if it would benefit him. He's in for 11 years for aggravated assault, so I'd love to know his interpretation of respect and doing 'humanitarian kinda things'.

Gethin --
Yes, those are two classic examples, thank you. And you spotted the clues well.

I have to say, a *little* bit of what seems off about both of those advertisements is that their authors are not well acquainted with the niceties of grammar, spelling, syntax, punctuation, etc. So it may be that some of what we see as sociopathic -- and I'm sure you're right about them being sociopaths -- is just illiteracy.

RE the illiteracy: I thought that too about the "for nothing". It could be that he tried to type "or nothing" - a double negative - that was autocorrected to "for nothing". Either way, it's not something a normal person would write. If you're not trying to con anyone, why would it be necessary to mention it?

Also, I noticed the spelling mistake "caliber" (unless that's an American spelling?). But that's still a narcissistic thing to write because it's not true. If he's of such high calibre, why is he in prison?

These were the OK ones I found. Most were so poorly written that I couldn't be bothered to read through them; there were many with the caps lock on, which IMO is worse than any spelling or syntax error.

Gethin --
Yes, some of that stuff is just them reciting cliches, and some of it is spelling, syntax, etc. And some probably has to do with Ebonics as well. ("Caliber" is the American spelling, btw.)