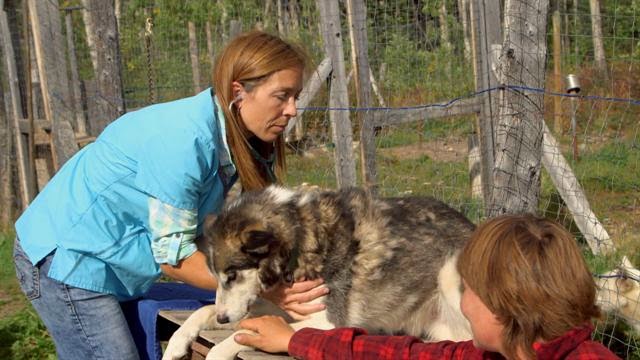 As a counterpoint to the previous post, here's a woman who will actually restore your faith in humanity: Dr. Oakley, a veterinarian based in the Yukon, the subject of a new National Geographic Channel show (on Saturdays at 9 PM).

You see a lot of people on TV who have undeserved reputations for goodness. (Certain perky and/or soulful talk show hosts come to mind.) But these people are mostly moral poseurs, who covet reputations for goodness with the same greed they have for everything else. They emote to their audiences, they dramatically lavish affection on people they barely know, and they always….. overdo it.

Dr. Oakley is the opposite. She's unpretentious, with a playful sense of humor. She obviously cares about both the animals and their owners. (If it's an act, then she's the greatest actress in the world.)

But there's nothing actressy about Oakley. You don't get the sense, as you so often do with so many "reality" shows, that there is an a role being played out for the cameras. She is the anti-"Real Housewife."

Oakley went to veterinary school and has spent her career taking care of animals in the Yukon; it wasn't as if she has spent her life chasing fame via acting auditions and the casting couch. Nor is she a social climber. (The Yukon tends not to be a magnet for such.) Somehow, someone at National Geo heard about her and said, hey, she's cool, let's make a show about her.

She's quietly attractive, in a no-makeup sort of way. And though she's not fat, she also doesn't look as if she spends all her spare time on a StairMaster, either.

One little (slightly counterintuitive) clue to her character: on the most recent episode, one of her daughters complained about how her mother was too bossy while she was assisting her with the animals. That her daughter would feel so comfortable complaining about -- and even mocking -- Dr. Oakley indicates that she feels absolutely no fear of her. That's the mark of a good mother.

Here's a three minute trailer for the show:

And if those two grabbed you, here's a 22 minute video of her:

I challenge you not to fall a little in love, as I did.
Posted by John Craig at 8:49 PM

How cool would it be to go to the Yukon? Very cool! Just imagine how fresh the air is, how dark it is at night and how far away it is from everywhere.

n yeah I just watched a couple. She's great. A bit old for me to fall in love with her but she seems like a wonderful person and I wouldn't mind being friends with her.

Steven --
I had the same thought, but as with all cool places, I think it would get a little boring after a while. The thrill of looking at a new vista really only lasts fora few minutes, at least that's been my experience.

Steven --
I was using "fall in love" sorta metaphorically, but she does seem as if she would be both fun and reassuring in a way to be around.

I reckon I could spend a while there happily. I'd probably need a tv and internet connection though!

Dr. Oakley is a busy woman. This vet would be an excellent role model for girls.

Anon --
Yes. I know you're referring to the fact that she's a good mother as well as a busy vet, but frankly, she'd be a good role model for anyone.

Not only is she an incredible vet, mom and wife, she is a GOOD HUMAN BEING with a true giving heart to all - man or beast. Such a sweet lady. Makes my heart smile when I watch her with family or patients. Love, Love, Love Her!!!! Meeting her is on my bucket list!!
(but how do her days have 30 hours in them? Lol!! She does soooo much!!!)

I love her show too! Being in school to gain my veterinary degree, I can't wait to start my career. I wouldn't mind working for Dr. Oakley, but I want to gain insight on how she juggles it all. While I desire to be a vet I also want to get married and have lots of kiddos. Seeing Dr. Oakley have her kids with her made me realize I can be both a mother who spends plenty of times with her children and a vet. She is a true inspiration who has made me realized I can have it all as long as I work hard. I wish to contact her to discuss the steps I need to take to achieve these dreams of mine. I still have a ways to go before I get to the point of becoming a practicing get, but it's never too early to start planning for the future! Hopefully I can find any contact information while I keep pillaging the web. Have a good day everyone!!

Jaime Lynn --
I would have no idea how to contact her, but I have to imagine a lot of people feel the way you do. I don't even know if her show is still on the air, I haven't seen advertisements for it recently and don't watch much cable these days. She does lead a full life, no question about that, and she is exemplary in every regard.

Good luck with your veterinary career.

Good post. This woman is definitely an inspiration. She kind of reminds me of my children's pediatrician, just an all-around good, decent human being.

These days the show is called "Wilderness Vet" and is in syndication. It's presently airing, for instance ithin a weekend grouping of "E/I" shows ... Educational and Informational. My local NBC affiliate in Central FL carries it on Saturdays at 10:30 AM.
So search your DVR for "Wilderness Vet"
She is awesome !! As a vet AND as a neat gal !

Joshua --
Thank you very much for that info. I'll check it out.

"Dr. Oakley: Yukon Vet" is currently showing on NatGeoWild (NGWHD) and I believe it's in the 5th season. On my DirecTV it airs at 7pm on Saturday, I live in Southern California. I have also come across her as "Wilderness Vet."
I LOVE HER TOO! I think her daughters are lovely, and her husband is both awesome and handsome.

Redhead Girl --
Thank you for the heads up. (And for your good taste.)