The NY Times had a front page article about gun control yesterday, their first official front page editorial since 1920. (Everything that appears on the front page of the Times is spun in some way, but this is the first article that's actually been labelled as an editorial.)

No one's name was attached, but it's unfortunate in a way that the editorial didn't come with publisher and CEO Arthur "Pinch" Sulzberger's byline. He's actually one of the rare New Yorkers who has been able to obtain a carry permit from the NYPD.

Pinch just doesn't think the rest of us should be allowed to get one.

Hard not to wonder what kind of gun Pistol-Packin' Pinch carries. A snub nose .38, whose compact size makes it ideal for concealed carry?

A Glock 21 semiautomatic? The cops use it, so it must be good, right?

A Sig Sauer P220? This one is a favorite among gun aficionados. It was featured in Rambo: First Blood Part II. Wait a sec, the Times didn't like the Rambo movies, so, nah.

Or maybe Pinch prefers the Heckler & Koch VP9. Okay, so maybe the Times has mentioned the Holocaust a time or two. But let's face it, those Germans make reliable guns.

Maybe he likes the Kahr CM9, available for just $460. Although, given the fact that Pinch pays himself $6 million a year (at a time when The Times is laying off reporters), he can probably afford a more expensive gun.

Many gun owners tend to think of their guns as "cool." Does Pinch show off his gun(s) to his friends? To his wife? How many guns does he have?

Does Pinch compare notes with Carlos Slim? Surely the world's richest propaganda-buyer does not travel unarmed. Or, as is much more likely, with a retinue of armed bodyguards.

How often does Pinch go to the range? How many rounds has he shot, total? Does he ever worry about the anti-environmental effect of all that gunpowder going off? (Every shot he's fired does contribute a little to global warming.)

Does Pinch load his gun with standard ammo, or does he prefer the more deadly hollow points, which expand once inside a man's body?

We know what Pistol-Packin' Pinch's favorite publication is. But does he also make time for Guns 'n Ammo?

Whatever the answers to these questions, don't expect the Times to report them. 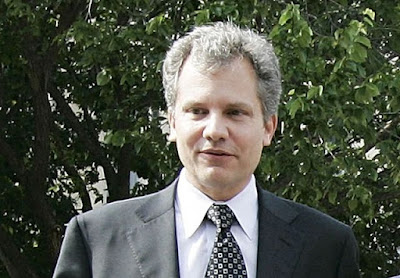 (Is it just my imagination or does Pinch have the soft-faced, wimpy, pencil-necked look of a mass killer?)
Posted by John Craig at 6:57 AM

I appreciate our Constitutional right to have guns, so I won't be giving this right up anytime soon. Liberals (and/or commies) would like to strip us of all of our freedoms.

Birdie --
If the liberals were really serious about cutting down on murders caused by firearms, they'd want to expand stop and frisk, not take the guns away from law-abiding suburbanites. (A post on that subject is coming.)

Since there are thugs in our world, common sense tells me that it's wise to have (and use) weapons for self-defense. Anyone who tells me differently is being unrealistic. I'm sure there are plenty of victims who would have liked to have been able to defend themselves at the time they were attacked, using self-defense techniques, shooting to kill if necessary. I'm all for taking the bad guy down.

Birdie --
I read somewhere recently that violence is declining in certain areas, but that even in those areas the violence in "gun free zones" was not declining.

Here is a quote from the article "How web giants wage war against guns; ignoring second amendment rights assaults the free market":

"It's the ultimate irony that these attacks on legal and highly regulated commerce in firearms come just as we see government reports that over the last 20 years, murders are down by huge numbers, so-called 'gun crime' is down by more than 40 percent, and accidental firearms deaths of adults and children are at an all-time low. During this same time tens of millions of Americans have become new gun owners, tens of millions of guns have been purchased, and more than 10 million people have been licensed to carry loaded guns for their own protection."

Ed --
Interesting, thank you. Legal owned guns cause a very small percentage of the murders these days. The vast majority of murders-by-firearm are by people who didn't come by them legally, and who do not have carry permits. There have been a few highly publicized mass killings where some crazy or otherwise maladjusted person killed a bunch of people, either with guns he bought legally or with a relative's gun. But even those constitute a small percentage of the homicides; a huge chunk is gang-related violence, killing of criminals by criminals, but for some reason the Obama administration doesn't want to focus on that.

Muslims are our friends and neighbors. You can buy a gun for your Muslim neighbor and check yourself into a mental clinic afterwards!

This gets sicker by the minute. We really are a loony bin.

That guy probably checked himself into a mental hospital as a first move in establishing an insanity defense for having aided and abetted terrorism. I often wonder what kind of people serve as the straw buyers for gang members, or for others bent on mayhem, like the Farooks. What is going through their minds? Do they not realize that they could be held partially liable for all of the actions of those they're helping?