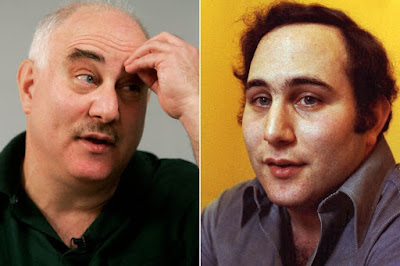 An article in the NY Post this morning describes David Berkowitz's latest parole hearing, in which he talked about the good work he is doing in prison.

Back in 2011 I wrote about how Berkowitz claimed to have found God, and how he was working as prison chaplain and doing various other good works. But one thing we know about sociopaths is that they never change. Their acts may change, often by necessity (it's a lot harder to keep up the serial killing once you've been caught and convicted). And they often claim to have turned over a new leaf (and actually expect people to believe them). But inside, they remain the same old unreconstructed sociopaths.

In 2012, in a post about "The Day Stalker" (serial killer Franklin Lynch), I explained how sociopaths will often give themselves away with a certain stylistic quirk: overuse of adjectives and adverbs.

In today's NY Post article, Berkowitz, who will be a sociopath until the day he dies, does his gentleman-doth-protest-too-loudly bit once again, talking about the good works he does in prison. But if you pay close attention to his words, you'll see how he betrays himself with overemphasis:

“I’ve really done wonderful,” said Berkowitz appearing before a parole board during his latest and 15th parole hearing, according to the transcript, dated May 17, obtained by The Post.

“I was constantly putting myself out there to help other individuals, with kindness and compassion,” he said. “I mean, I feel that’s my life’s calling, all these years. My evaluations, and so forth, should show that to be true. I’ve done a lot of good and positive things, and I thank God for that...”

(Note that he wasn't just constantly putting himself out there to help others, he was doing it with kindness and compassion. A nonsociopath would never bother to add those two qualities, because it's just assumed he has them if he's helping others; ironically, a sociopath will, because he lacks them. And it wasn't just Berkowitz's entire life's calling, it's his life's calling all these years. And he hasn't just done a lot of good things, he's done a lot of good and positive things.)

“I feel I am no risk, whatsoever,” said the “.44 Caliber Killer” who called his gory reign of terror a “terrible tragedy...”

(He's not just no risk, he's no risk whatsoever.)

“Unfortunately, it was a terrible tragedy. I regret that with all my heart. I would do anything if I could ever change that,” said Berkowitz, adding that he is “deeply sorry.”

(Note the way he distances himself from his killings by referring to them with the impersonal "it." And the way he doesn't just regret it, he regrets it with all his heart. And the way he's not just sorry, but deeply sorry. You see, his emotions run very deep.)

“It was a time that my life was out of control. I’d do anything if I could go back and change that, but it’s impossible to go back into the past and fix those kinds of things.”

(Note that he doesn't say that he was out of control, merely that his life was. Another distancing.)

Berkowitz boasted about himself to the parole board, saying that while imprisoned, “for many years I have worked as…just like a caregiver.”

“I have a heart for helping and reaching out to inmates, offenders, who have psychiatric problems, who have a lot of depression, and things like that…so, I feel that’s my calling in life,” Berkowitz said….

(A nonsociopath would simply say that he's helping other inmates; a sociopath feels obliged to emphasize his "heart.")

However, he admitted that he told prison staffers that parole is not “realistic” for him.

“I feel that the crimes were so serious and the damage so severe, and so many people I’m sure are still hurting and grieving, that, realistically, something like parole, in my situation, would be very unusual,” he said.

(Once again, he doesn't take responsibility for his serial killing, referring to them as "the" crimes and not "my" crimes. And hey, "unusual" does not mean "impossible," does it?)

When pressed by the board as to where his past “rage” came from when he murdered and wounded innocent people, Berkowitz replied, “it’s beyond my comprehension.”

(By saying it's beyond his comprehension, Berkowitz is disavowing responsibility once again, and also trying to imply that it's almost as if he was in a fugue state when he committed the murders, and is a completely different person now. This is not all that different in spirit from how, when first caught, he claimed that a dog told him to commit the murders, in a sly effort to set up an insanity defense.)

He added, “I look back with, like, so much disbelief. There are times that I wake up and say, I can’t believe this happened…”

Berkowitz ended the letter saying, “I want to continue to be something of a role model for my fellow inmates, as well as a source of hope and inspiration to whomever I can.”

(Only a narcissistic personality sees himself as an inspiration to others. And only a shameless personality actually talks about it.)

You have to think the only people who actually find the Son of Sam to be inspirational are wannabe serial killers.
Posted by John Craig at 6:33 AM

Note the way he distances himself from his killings by referring to them with the impersonal "it."

Yes, that really jumps out. It was a tragedy. No personal responsibility for what he's done.

“I feel that the crimes were so serious and the damage so severe, and so many people I’m sure are still hurting and grieving, that, realistically, something like parole, in my situation, would be very unusual,” he said.

He's just trying to appear as normal as possible here. If he even hinted that he expects to be paroled for his "good works" that would be insane. So he totally understands the parole board, that even though he's sorry, and no longer "in that situation" they can't be expected to release him...but...maybe?

Only a narcissistic personality sees himself as an inspiration to others. And only a shameless personality actually talks about it.

So true. And they go overboard and it all sounds so fake. It's amazing how many people fall for it.

Rona --
Yes, good point, he's trying to appear normal. That's what a lot of the "with kindness and compassion" is about. He wants to appear normal, so by claiming the normal traits, he thinks he's fooling people into thinking he has them.

And yeah, it is pathetic that people fall of this kind of act. With Berkowitz, everyone knows he's a monster, so nobody, or at least none of the people on the parole board (who are wise to sociopathic tricks) will fall for him. But if he weren't actually the Son of Sam, in other circumstances, say if he were just a run of the mill con man or huckster of some sort, people would fall for his act. Look at how many people fell for Bill Clinton's act. ("I feel your pain.")

Then again, until you've really been exposed to a sociopath up close and personal, it's hard to fathom how utterly without humanity they are. I made it through age 25 without having a clue as to what they are.

You'd think that a serial killer wouldn't appear before a parole board, especially because the criminal is a psychopath. Good grief.

Susan --
Everyone gets parole hearings, but those boards aren't about to let Berkowitz out any more than they are Charlie Manson, who also gets hearings every two years. (Charlie has actually said he'll kill again if they free him, which isn't exactly the best tactic if you want your freedom.)

this is probably a pointless comment...but...Berkowitz looks a lot better in the new photograph...I know prison is a health club, and, maybe he was drinking heavily in the "before" photo (and killing people is stressful I EXPECT)...but the old photo he looks like trouble, the new photo he could pass...again, this is not to say he deserves parole, but just, would you let you daughter go out with him (based on photo alone) heehee

Fake Baba --
You're right, he does look more normal somehow as an older man. I'm always struck by how weirdly swollen his face looks when he was younger. He almost LOOKS as if there's something wrong with him in those old (young) photos, whereas in the more recent photos he just looks like a regular guy.

I guess this is how we can deduct that a sociopath killer can con random visitors into thinking they are "normal" and convince them to date or even marry them. Don't you wonder how and why a nonviolent, average citizen would befriend or even marry these guys? I sure do! Maybe they are less lucky than we are and have lived life even longer without encountering a sociopath?

Runner Katy --
We're all naive until we get to really know our first sociopath, and a lot of people haven't gotten to know one yet. And if you don't know what they're all about, it's an awful lot easier to fall for their act. And they do tend to be good actors.

As far as the hybristophiliacs who marry known serial killers, that's a whole different thing.

Notice how he says he had worked "just like a caregiver" rather than saying I have worked as a caregiver to others. It's a subtle distinction, but in that statement, he has revealed that it is all an act.