Olympics, Part VII: The enormity of the moment

Watching the semifinals of the 200 last night, it was hard not to be struck by Usain Bolt's demeanor towards the end of the race. He had been his usual loose, jokey self up until about twenty seconds before the start of the race, then got serious. By about 150 meters into the race, he had a comfortable lead, so started to ease up.

But Canadian Andre De Grasse had other ideas, and although he seemed to be safely in second place (a qualifying spot), kept pushing all the way, causing Bolt to have to speed up a little at the end. Bolt seemed to find this amusing, and gave De Grasse a big smile as they were crossing the finish line. As soon as they crossed Bolt gave him a jokingly admonishing finger wag, as if to say, "Naughty boy!" 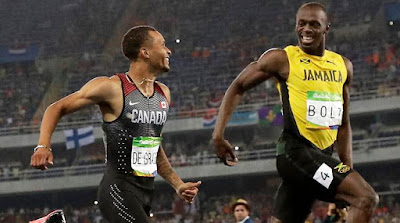 Personally, I can't imagine being able to smile at the end of a hard, fairly pressure-packed 200 that close to a best time. For Bolt to be able to pull it off seems the epitome of cool.

It's hard not to see a racial difference here: blacks are simply less likely to be overwhelmed by the enormity of the moment and succumb to pressure, as I mentioned here.

What thoughts are going through Bolt's head when he is about to compete? I'd imagine they're something like the following:

"This is fun....Look at that cameraman, trying to hard to get a shot of me, I think I'll wink at him and make his day....It'd be sort of cute if I hid my face for a moment before they announce my name.....Listen to that roar -- they really adore me.....Okay, time to run.....Make the sign of the cross, the Lord has always been on my side....Okay, start strong....Don't stumble...run the curve hard....Okay, things are good, these guys don't stand a chance against me, I can ease back now.....God I love this sport....What?? What does Andre think he's doing?! That little rascal!"

A more typical competitor might be more likely to have the following thoughts going through his head before his race:

"Okay, this is it. This is the race I've been training for all these years! Oh my god, there are probably two billion people watching me at this very moment! Don't blow it! I can't let my family and coach and friends down! And I'm here representing my entire country! I'll remember this for the rest of my life! This is so important for my future! Don't screw up, I'll really regret it if I do! Okay, here goes....My heart is beating so fast I can almost hear it! Boy, do I ever feel like puking! I'll be so relieved when it's all over."

The second competitor is having these thoughts partly in an effort to psych himself up. The irony is, athletes with Bolt's more easy-going attitude generally do better. They are relaxed, and a relaxed body performs better than a tense one. (Bolt understands this, and has said as much in interviews; but it's also just his nature to be that way.)

By contrast, the Japanese swimmers as a group have, over the past fifteen years or so, performed better at home than they have on the international stage. It's been hard to escape the conclusion that they've been done in by the pressure. (They tend to think like the second competitor, times two, and with the added pressure of not wanting to let their ancestors down.)

During the swimming events this year the Japanese all smiled as they came to the starting blocks. It's my guess that the Japanese sports psychologists trained the team to do this. They must have analyzed the situation and realized that forcing a smile actually relaxes you, which in turn aids performance. (It's not entirely unlike sex that way.)

In fact, knowing the Japanese, they probably actually practiced walking to the starting blocks and smiling. (The Japanese are good about obeying orders, whether their instructions are to smile or to crash one's airplane into an American destroyer.)

Anyway, their new attitude, forced or not, seemed to pay off in Rio, as they won two individual golds in swimming.

It's a pretty safe bet that Usain will benefit from his relaxation and win the 200 tonight, too.
Posted by John Craig at 1:06 PM

"Okay, this is it. This is the moment I've been training for all these years! There are probably over a billion people watching me at this very moment! Don't blow it! I can't let my family and coach and friends down! And I'm here representing my entire country! I'll remember this moment for the rest of my life! This is so important for my future! Don't screw up, I'll really regret it if I do! Okay, here goes....My heart is beating so fast I can almost hear it! Boy, do I ever feel like puking! I'll be so relieved when this is all over."

While visiting relatives last week in Georgia, we all watched the Olympics. When I saw Usain Bolt make the sign of the cross before his race, I was impressed. He is a likeable athlete. My kids enjoy watching him compete. A cool guy.

Birdie --
He makes that sign before every one of his races, though that's not why I like him. I find him likable because he's so joyful, and seemingly without animus.

I saw him race earlier this week. He is a great athlete, having a very likeable vibe to him. The fact that he appears to be a person of faith is a plus. I was shocked to see him make the sign of the cross. I questioned if he was Catholic.

Birdie --
I just read recently that he is Catholic.