In February 2014 I pointed out that former NFL star Darren Sharper, who'd been accused of eleven druggings and seven rapes in four states, was also active in A Call to Men, an organization dedicated to preventing violence against women. 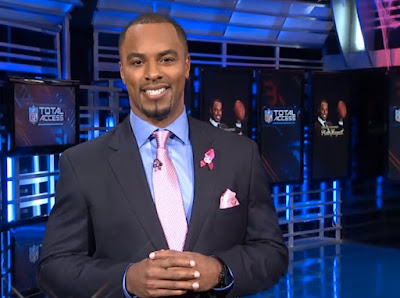 The point of the post wasn't that it was surprising that a guy active in that organization would turn out to be guilty of sexual assault. It was that you should actually expect a sociopathic serial rapist to do something like that. What better cover for being a rapist than to pose as an advocate for women? It's not as if a sociopath is going to be bothered by his own hypocrisy.

It was a little like when Ted Bundy worked at that suicide prevention hotline.

Since then, Sharper has been convicted. (And it seems likely that the women who came forward represent only a fraction of the women Sharper assaulted.)

Yesterday, he was sentenced in California for the two druggings and two rapes he committed there.

What I found most striking about the AP article was what Sharper said to the judge in Louisiana when he was being sentenced there: that he "wanted to apologize a thousand times."

There's something peculiarly sociopathic about being so emphatic in one's phoniness.
Posted by John Craig at 9:26 AM

GT --
Thank you, yes, "Alter Ego" pointed that out yesterday on the post "The mindset of someone acting as his own lawyer" yesterday. Somehow it's always surprising, but not surprising. I guess a guy who feels no qualms about shooting a bunch of old church ladies who were being nice to him is not going to feel any self-doubt about his own abilities as a lawyer. He probably intends to use his court time to advance the cause of white nationalism, thereby hurting that cause.

You have an impeccable sociopath compass, John Craig. This is another one of those seemingly-minor observations about sociopathic tendencies that are actually brilliant. The hypociritical shamelessness of wearing that pink ribbon is astounding! But it's all par for the course for a sociopath. Sociopaths count on immediate, in-the-moment flash impressions to sail them over any past rough bumps. And sadly, they do often wing it --- for a time. Glib, slick, 'spontaneity' (read: impulsiveness) is often confusing to an honest citizen. An honest citizen is also handicapped by his or her sheer inability to grasp that someone could be THAT shamelesss. It's unfathomable.

Anyway, yes, you're absolutely right, sociopaths definitely count on honest peoples' naivete and decency. They know that the typical honest person will not see through them, just because they can't fathom the depth of their depravity. And yeah, to those of us who are for the most part sticks in the mud, a sociopath's spontaneity/impulsiveness can seem like a refreshing change at first, until you see the utter lack of a sense of responsibility behind it.

Of course, I agree with The Ambivalent Misanthrope.
Mister Craig is VERY SUITABLE and WORTHY OF PRAISE, truly.

We should probably develop some secretive coded method of lauding Mister Craig, so as not to be off-putting or frightening to new readers of the blog...

"My God, Vern. It's like a cult in there, all they do is praise the guy who writes the blog, all day every day, as if he were Lyndon LaRouche, or L. Ron Hubbard."

Or we could just give Mister Craig money. Or shave monkeys, or perform some other unusual targeted atrocity in his honor...where I went to college there was a driving range nearby, and for months every year, students would steal and hoard golf balls...then, a certain night would be picked as the festival, and say at 2am everybody would dump many thousands of golf balls downhill, down (that one) Boulevard that ran past the school. Damn, that was a pointless anecdote. But WELL-MEANT.

Fake Baba --
Ha, you're going to turn my head. But thank you.

So keep it coming, please. Oh, and get ready to board the spaceship: don't worry, we're all going to a much better place.