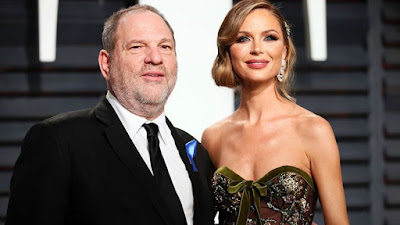 Commenter LBD had some trenchant observations about Mr. and Mrs. Weinstein after the previous post. Her first comment:

When this first broke I told my husband, I'm counting down.....three, two, one...until his wife leaves him. She is twenty years his junior, very attractive, and he is now nothing but a liability to her. He has made her fashion company name toxic and is unlikely to earn much money in the future. If he were a nice guy with a giving heart I might believe she would like sleeping with him, but seeing as how he is a physically unattractive sociopath with a nasty personality and an odd kick in his gallop sexually, he is, as they say, neither use nor ornament.

Sure enough, today it was announced that she's bailing.


You called it. You've described Harvey perfectly, and everything you say is completely logical, and makes sense from Georgina's perspective. But it also implies something about her that's less than appealing: that she married him for very cold, logical reasons that had noting to do with romantic feelings. Whenever I would see a picture of the two of them together, I'd always think, wow, that's one tough gold-digger. She was able to abide his appearance and his piggishness, all for the money. That implies a very calculating nature on her part as well.

John, it's not as simple as gold digging. I believe it was more like social climbing. She was capable of earning a more than adequate living by herself, but marriage to Fat Bastard brought both her and her company to what passed, until last week, for the upper echelons of society. The combination of film celebrities and political celebrities as "friends" must have felt like the ultimate in social clout.

Now that I think of the scenes in Austin Powers with Heather Graham and Fat Bastard, I can't help but think she and Mike Myers must have had ol' Harvey in mind when creating that character.

Ha, Fat Bastard, good analogy. And yes, they may well have based the character on Weinstein. And, not so coincidentally, Heather Graham was another actress who came out recently and said she had the impression Weintein wanted sex in return for a role. (One thing you have to say for Weinstein, he had good taste.)

You're right, social climbing had a lot to do with it too. I think the gold digging aspect shouldn't be underemphasized though (he was pushing Marchesa on all of the actresses who walked the red carpet of this films, and the brand would never have gotten that kind of exposure otherwise). But yeah, the opportunity to mingle with the rich and celebrated must have been a big part of the equation too.

One thing that nobody seems to be saying now is, "Oh, that poor put upon woman -- this must all be so difficult for her!" Everyone seems to realize that she knowingly made a deal with the devil.

For her not to have known what he was like, she would have had to be incredibly stupid. And no one has accused her of that.

When one side doesn't fulfill their contractual obligations, the other side can back out.
Posted by John Craig at 8:38 PM

one problem with social climbing is that the world is so empty...

entertainers are usually boring, or anyway NO FUN and more like a dire full-time job to hang around with...and then many rich people are cheap, OH I LEFT MY WALLET IN MY OTHER SUIT, can't lend you five bucks...and then experts are wrong all the time as well (otherwise THE FIRST SCIENCE BOOK ever written would still be in use today, hmm)

it's like the bit from the Tao Te Ching "THE FURTHER YOU TRAVEL, THE LESS YOU KNOW"...i.e. instead of working so very hard to social climb, one could PAY ATTENTION and through close study derive some benefit from the random neighbors in the garbage flats one grew up in...

I haven't known many entertainers personally (though thanks for thinking my life has been more glamorous than it's been). My impression of most of them is that while they may be quite good at the niche they've found for themselves, overall they're usually pretty dumb. All you have to do to realize that is listen to the political opinions of actors and actresses. At the same time, they tend to take themselves very seriously; that doesn't make for an appealing combination.

Having worked on Wall Street, I HAVE known a fair number of rich people. The ones I've known haven't been cheap in an I-left-my-wallet-in-my-other-suit sort of way. If anything, the opposite: a fair number of them liked to splash their money around to show off. Were they fun? For the most part, no. Some of them were smart, but a surprising number got to where they got by being shameless, and/or dishonest, and/or lucky. (Which combination they saw as being "smart.")

Agree completely about social climbers, and I've known a few of those as well. They think that knowing someone famous somehow validates them, and they get some of that glamour by association. And after a while you realize that to the social climber, personal attributes mean absolutely nothing: it's all about the fame. That inability to see personal attributes indicates a lack of intelligence and a lack of insight. And the mindless worship of fame indicates a complete lack of self-awareness on the part of the climber.

Georgina Chapman is stunning. Her estranged husband looks like an ogre. Even if she herself might have married him for his money, good riddance to him.

Susan --
Agree, she's beautiful. But the point of this post was, more so on the outside than the inside.

I have another prediction, which we may not be able to verify as it most likely will not be public. As soon as she is legally disentangled from Fat Bastard, the lovely Georgina will have a dirty weekend getaway with a very handsome, young guy, most likely one of the models she knows through the fashion industry, it will be an effort to clear off the bad juju and reclaim her ownership of her own body.

This will not be an exploitative encounter since she is young and attractive enough to get more than willing participation from almost any young guy with normal T levels.

LBD --
I'm sure you're right. Personally, I think she's attractive enough to get willing participation from a guy with low T levels.

The whole thing reminds me a little of the way, after Anne Heche's relationship with Ellen DeGeneres was over, she went straight back to guys. She hasn't been with a woman before, or after DeGeneres, as far as I know, and that's sort of all you need to know about what she wanted from DeGeneres.

She is not all that. She has tons of make up, without it she looks like a plain Jane!!

Jared --
I just Google-imaged "Georgina Chapman without makeup" and there was one series of pictures, of her wearing a leather jacket and some kind of big scarf and sunglasses, which made it look as if she'd gained weight. If that's the case, then she's lost her looks. But there were a couple of other pictures from earlier, when she was makeup-free, where she still looked awfully good to me.