The NY Post ran a story this evening about the contradictions and inaccuracies in Sherri Papini's story about how she was kidnapped for two weeks.

I had pointed out back in December that there were a number of things about her story that didn't make sense.

And it emerged in March that Papini had a history of lying, and self-harming, and stealing things from her own family.

It's pretty obvious at this point that Papini has Munchausen's Syndrome: she concocted an elaborate hoax simply to get a lot of attention and sympathy.

And, please, don't forget that Munchausen's is nothing more than a form of sociopathy. A lot of people seem to think that it is a unique, standalone mental illness. It is not. It is merely the ploy of a an unscrupulous person to gain attention and sympathy through elaborately dishonest means.

Sherri Papini is a sociopath, plain and simple. Don't let that innocent face fool you: 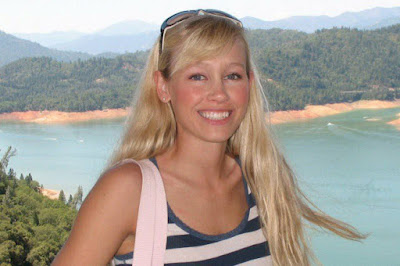 Let Sherri serve as a reminder that sociopaths come in all shapes and sizes and levels of beauty.

Let's hope the judge, when sentencing her for filing a false police report does not feel sympathy for her and lessen her sentence because of her "mental illness."

That actually happened in the case of Lacey Spears, the woman who poisoned and eventually killed her own son in an effort to gain widespread attention and sympathy. (When you make someone close to you sick in an effort to gain sympathy, it's called Munchausen-by-proxy.) According to Wiki:

On April 8, 2015, a judge sentenced Spears to 20 years to life in prison for the death of her son. The judge in the case, Robert Neary, said that Lacey Spears suffers from Munchausen syndrome by proxy,  and therefore did not sentence her to 25 years in prison, the maximum possible sentence.

That was a miscarriage of justice.

Panini hasn't done anything nearly as bad. But as a sociopath, she's certainly a lot more capable of doing bad things than most people are.
Posted by John Craig at 10:22 PM

Well the sketch of the older female kidnapper appears to be a younger Hillary Clinton, a known sociopath and pathological liar. Maybe these two are friends.

Not Dave --
Ha! Either that, or Hillary hired that Fusion company to make Sherri look bad.

I read the NY Post article via this post. Well, well, well, Sherri doesn't come across as such a devoted wife. I wonder what she was up to during the time she went missing?

Birdie --
Well whatever it was, it involved some male DNA.

I enjoy the fact that you referred to her as Panini. You know she's a lying little skenk, but you still want to eat her up!

Lollygagger --
Ha, you see right through me!