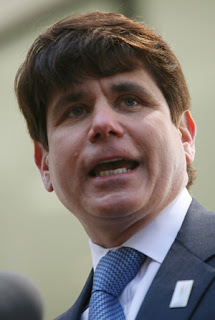 John F. Kennedy did his profession a great disservice by wearing his hair the way he did. Ever since, countless politicians have tried to "evoke" JFK (and RFK) with their hairdos. While the Kennedy brothers probably came by their slightly unkempt hairstyles naturally, most of their imitators have obviously taken great pains with their slightly overlong, carefully blow-dried hair which falls across their foreheads just so.

Politicians as a breed are not an overly good-looking lot (Harold Ford Jr. and Mitt Romney are exceptions, but I can't think of any others at the moment). Nonetheless, many seem extraordinarily vain about their hair. Bill Clinton once made other planes wait on the tarmac so he could have his hair cut, and John Edwards famously paid $400 for one of his haircuts.

Gary Hart and John Kerry both tried very hard to come across like long lost (and well tousled) Kennedy brothers. Hart tried a little too hard to emulate JFK's womanizing, to his political detriment. And Kerry was totally unable to duplicate JFK's effortless charm. But both get an A+ for effort.

Whatever the case, there are an extraordinary number of (mostly Democratic) politicians who sport a big, bushy head of carefully blow dried (and probably dyed) hair. It's hard to be exactly sure what such a hairdo is mean to to signify. I'm guessing that in a politician's mind it is supposed to represent a certain youthful vigor and earnestness, as well as announce that he is the Second Coming of JFK. To me, it screams a lack of originality. But maybe I'm too critical.

The latest in this long line of offenders is, in case you couldn't guess from the above picture, Rod Blagojevich. If he shouldn't go to jail for his avarice, he should at least serve some time for that hairdo, which is JFK squared. It's not an accessory to his head, his head is an accessory to it. First of all, the hair is massive, like a hat that's a couple sizes too large. Secondly, the dye job is as blatant as his greed: it would be remarkable for a 51-year-old to not have a single white hair in his head.

Of course, given his ordinary facial features, Blago may in fact be doing the right thing (if that phrase can be applied to him) by having a hairdo that demands your attention, simply because it draws your gaze away from his close set eyes and plump cheeks. As a result he looks attractive enough at first glance. His body language is certainly energetic and confident as he strides up to a podium, and he's obviously well groomed. All of which says he's doing a good job with what he's got. Which is all we can ask of anybody.

Well, I suppose we could ask them to not be corrupt as well.

Blago was evidently a big Elvis fan. My wife claims his hairdo is meant to evoke Elvis, not JFK. I disagree. Even during his most flamboyant, rhinestone-encrusted, jumpsuit-wearing Las Vegas period, Elvis would never had had the gall to sport a do like that.

Blago's second biggest problem after his hair is that he imitated the wrong Kennedy. Rather than try to channel JFK's self-deprecating wit, he instead tried to get rich illegally, like the old robber baron himself, Joe.

Given that Blago seems more interested in doing well rather than doing good, why didn't he just go to Wall Street, where he could have gotten rich legally?

He'll have plenty of time to ponder that question where he's going.
Posted by John Craig at 12:10 PM