What I want to look like when I grow up 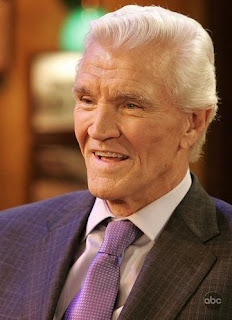 A year or two ago, I saw the guy pictured above (the older version) in the locker room of the local Y. He was obviously well into his sixties, but was in tremendous shape and had one of the hardest-looking faces I've ever seen. (For some reason there are no recent pictures of him available where he's not smiling, but his usual expression looks more like a modified glower, which seems to be a function of bone structure rather than personality.) I thought, wow, a tough guy, we don't get too many of those in my hometown. He still looked like 175 pounds of testosterone on the hoof, which is rare for a guy of that age. (When you see a twenty year old who looks as if he's spoiling for a fight, you can't help but think, what a moron. But when you see a guy in his sixties who looks that way, it's hard not to think, what a man!)

He also looked as if his nose might have been broken at some point, so I got it into my head that he must have been a boxer. Just to satisfy my curiosity, I asked, "You look like you're in great shape, what was your sport?"


He replied mildly that he had played some football, but now found swimming to be great exercise, as it had actually brought his voice back. He added that he had started his show business career as a singer. I was slightly chagrined that I had been wrong about his sport, and the show business comment didn't really register. I just figured it was something he had done when he was young, before he had gone into whatever blue collar career he was in. (White collar guys never look that tough; though now that I think of it, neither do blue collar guys.)

A few weeks later I was standing by the side of the pool chatting with a woman when he walked by. The woman said, somewhat breathlessly, "That's Adam Chandler!" I asked, who? She explained that Chandler was a character on "All My Children" and that the fellow I had thought was a boxer was in fact David Canary, a well known actor.

The next time I saw him, I said, "I hadn't realized you were a big TV star."


Canary made a dismissive wave with his hand and growled, "Agh, just on a soap opera. You've got better things to do then watch soap operas." (What a great line.)

Each time I've seen him over the past couple years, I always think, now that's the way a man is supposed to look: rugged and chiseled. If Canary were an animal, with that mane of white hair and his fierce, regal mien, he'd be a lion. (I evoke a chimpanzee.)


A few weeks ago I said to him, "Please don't misinterpret, I'm not gay, but I have to say, you're one of the most magnificent-looking men I've ever seen." (A more confident man would not have needed that preface, and would have spoken more slowly and emphatically; I, of course, felt obliged to include the preface and blurted the whole thing out too quickly.)

He said, "Oh, I've seen your children" in response to the preface, then added, after I was done, "I have to question your eyesight, but....thank you." Once again, I thought, what a great line; he must get plenty of opportunity to use it.

(If you're thinking it's a little weird for me to be talking to a seventy year old man as if he's a twenty year old girl, well, I can't argue.)


A week later I bumped into him again. I tried to cover up my sheepishness by saying, "You know, it's not every day I go up to another guy and tell him how good-looking he is."

He smiled slightly and replied, "I've replayed that conversation in my head several times since." Then he reached out to shake hands. He knew just what to do to make me feel less foolish.

A few observations. First, good-looking people often seem to be all cheekbone. I have to maintain myself at the absolute peak of fitness in order for my tiny cheekbones to even be perceptible. Canary could actually allow himself to get fat and those things would still be sticking out about half a mile on either side of his head.

Second, the camera seems to love people with almost exaggerated features. I once saw the actor Matt Dillon in person, at another gym. I was struck by how he looked almost like a cartoon version of himself in real life, with cheekbones that seemed even more prominent than they did onscreen.

Third, the above picture of Canary on the left, when he was younger, makes him look hyper-androgenized, i.e., as if he were exposed to an excess of male hormones in the womb. (Male hormones tend to make the jaw larger and stronger, the forehead more prominent, the Adam's apple more prominent, and the eyes deeper, among other things.) Evidently Canary made a living in the 1970's, post-Bonanza and pre-All My Children, playing bad guys on TV. You can see how he would have been cast that way.

Guys with a lot of male hormones are generally more intimidating, brutal, and even violent in real life. So directors like to cast men with hyper-androgenized faces as villains. Think Jack Palance in Shane. Or think of the number of times that acromegalics -- who are huge guys with exaggeratedly manly features -- have been cast in roles which call for intimidation. For instance, Richard Kiel ("Jaws" in the James Bond movies), or the guy who had the knife fight with Paul Newman/Butch Cassidy, or Andre the Giant in The Princess Bride.

Comic book artists also take this into account. The bad guys inevitably have big, prominent jaws and deep set eyes, as well as bodies that look as if they've ingested massive doses of steroids. (Then again, so do the good guys. Comic book readers want their heroes to be just as manly as the villains, and one look at Superman's jawline and bulging neck show that, kryptonite or not, he's got the right hormonal mix.) Stan Lee knew what he was doing.

After I first found out who Canary was (everyone in town except me seemed to know), I Googled him and saw that he had been in Hombre, in my opinion one of the four greatest Westerns of all time. I watched it again and was impressed by how well he played the bad guy. In fact, I remembered that the first time I saw it I had been left with the impression that the actor must have been a bully in real life, too, otherwise he wouldn't have been able to play nasty so well onscreen.

But Canary is in fact mild-mannered and gracious, as exemplified by the above quotes. I sometimes wonder if at some level he doesn't feel obliged to go out of his way to be nice just to offset the instinctive impression people must have of him from the sociopath he plays on All My Children. Or from his hyper-androgenized face. (Maybe that's why he's smiling in every recent picture I found on the web.)

Anyway, the moral of the story -- if one can ascribe morality to a story primarily about something so superficial as appearance -- is that it's always reassuring to see a guy who's older than you who looks better than you do. It gives you hope (however false).
Posted by John Craig at 4:32 PM

Great post. I've never really met any "stars" owing to growing up Australia however I was told by a friend that the male stars have really big heads! this goes along with the exaggerated features you mentioned.

I have a man crush on the middle aged Oliver Reed. His antics also demonstrate a high testosterone man. Getting in drunken fights, humour and sexism.

Just looked up Reed. Yes, high testosterone. I can see why they considered him to play James Bond.

I just read a headline on another website, stating that this man died. May he RIP.

Birdie --
Wow, that was the first I'd heard of that. I just looked it up; he died eight days ago, on the 16th. He usually swam two or three times a week, often at the same time I did. Towards the end his Alzheimer's was becoming more apparent, and I had to help him find his locker a few times. But even though his short term memory was gone, he was still gracious, and still looked magnificent.

He had a pool at his home, and swam in that during the summer months, then usually would start coming to the Y again in September. This year he hadn't appeared at all, so I had a feeling that he wasn't well. Anyway, I'm sort to hear this. Despite being a big star he was unassuming, and he went out of his way to be complimentary to a nobody like me.

I assumed from the headline that he JUST died. My mother has dementia (it's heartbreaking). For him to have had Alzheimer's, that had to have been tough on him (and his loved ones). I'll read up on him shortly. God bless him. From your descriptions of him, he sounded like a gem of a man. How sad.

Birdie --
Sad, yes, but not tragic. He was 77, and lived a full, rewarding life. The Alzheimer's was tough, but up until then, in many ways, he was very lucky.