Analysis of a choke 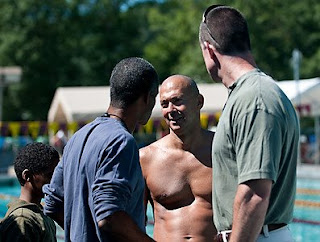 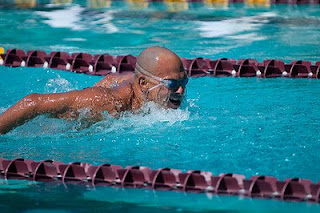 I know this is supposed to be a blog with general social and political commentary, and not a diary, but since I was so eager to report on my world record swim back in March (http://justnotsaid.blogspot.com/2009/03/excuse-to-boast.html) I feel obliged to show balance -- or at least the superficial appearance of such -- by reporting on my abject failure yesterday.

People would occasionally ask when I was going to go for another record. I would tell them July 19th, and most would then ask where I was going to do it. When I said here, in Wilton, some responded that they wanted to see it. By the time of the meet, my potential audience had grown to around fifteen, including the aforementioned "strongest" and "coolest" guys (see posts below and top picture above).

Over the past decade I'd noticed that my adrenal function had slowly wasted away with age -- as it evidently does with most people. When you reach your forties, you simply don't get nervous about the things that used to make you that way. The old fight or flight response just doesn't kick in. I guess when you get old you're supposed to do neither, and instead just get slaughtered to make room for the younger members of your species.

I had actually tried to get nervous before other swimming meets, knowing that a little adrenalin in the system can do wonders for one's performance, but hadn't been able to. Nervousness is like an erection or a witty riposte -- it simply cannot be summoned at will.

But for some reason I got nervous before this meet. Very nervous. I knew everyone expected me to set another record, and I didn't want to disappoint them. But I had much less confidence in my ability to swim four 50 meter laps, as opposed to eight 25 meter laps. A 50 meter pool is obviously twice the length of a 25 meter pool. It only looks three times as long. Especially when you have to swim it all butterfly.

Ask any 200 flyer, they'll tell you you can always fake your way through eight short course laps by semi-resting on the turns, taking a long glide on the pushoffs, etc. But there is universal agreement that there is absolutely no faking your way through a 200 long course fly.

Two nights before the meet, I only got four hours sleep. The night before, I never fell asleep. Not a wink. I just lay there all night with the adrenalin steadily pumping into my stomach. I had forgotten what an unpleasant experience real nervousness is. It brought back a lot of unpleasant memories of my youth.

At around 3:30AM my thought pattern was running as follows: I'm 55 years old. I've never had to compete on absolutely no sleep before. And I have to swim a 200 long course fly. I'll probably have a heart attack and die. Hmm, most people don't realize it on the day they're going to die; at least I know ahead of time. I wonder how soon the onlookers will realize what's happening. I wonder how soon it will take them to pull me from the bottom of the pool after I sink. I wonder if anyone there will know CPR. I guess I could always just quit after three laps. But I wonder what the guys will think of me if I do that.

(It's called the power of positive thinking.)

My mind must have run through that train of thought at least ten times. (This is not a joke.) It was like a bad dream. Except I was awake.

Unfortunately, we have no control over the thoughts going through our heads. At least I don't. I tried to do some transcendental meditation, but was unable, as my brain was just too feverish.

The next morning I actually felt fine during warmup. After warming up I took one of those five hour energy drinks, which are supposed to be the equivalent of one cup of coffee. But I still knew that I was operating on no sleep, so I was paranoid about dying (metaphorically, not literally, it was daytime now). So I took out the first 100 very slowly. To make extra sure I didn't die, I went slowly on the next 50 as well. With around 25 meters to go, I realized I had a lot left, so I picked up the pace a bit. But by then it was too late. I missed the record by five seconds, an eternity in swimming.

In retrospect, if I had really gone for it, sleep or no sleep, I think I could have gotten it. But I just swam for survival rather than a fast time. It was in every way an invertebrate performance.

Everybody who came to watch was very gracious about it afterward. Which of course made me feel even worse.

At least my family had a good time afterward. When I got home my 14 year old daughter said "I still love you Dad. Maybe not quite as much as before, but I still love you."

My 17 year old son, after being uncharacteristically polite at first, said, "Dad, I guess you know you really screwed up when you say thank you and I actually say you're welcome afterward. "

My wife said, "Gee, you really should write thank you notes to all the people who came. Just be sure to include an engraved invitation to your next attempt."


Signed, The Choke Artist
Posted by John Craig at 11:24 AM

Are you ever going to attempt another record? I think you should set one and tell them all about it :-).

Steven --
I hope so. I intend to try again this fall (after having tried and failed abjectly twice this past spring).