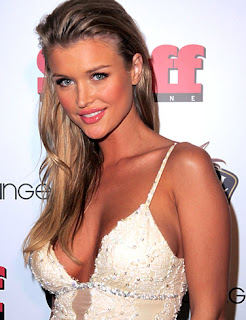 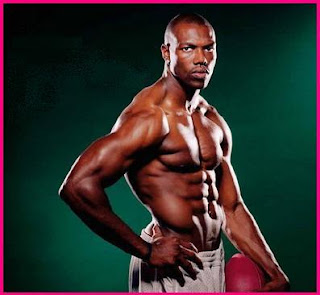 
I've been watching Superstars for the past two weeks (on Tuesday evenings at 8PM on ABC.) I have no excuse, as it's pretty much the ultimate in trash TV. It barely even pretends to be a semi-serious athletic competition like the old Superstars from twenty years ago. The idea of this version of Superstars is to combine athletes (almost all pros past their primes) with entertainment figures (mostly from ABC television shows) into competing pairs. The last team not to be eliminated will be declared the winner. It's fun to imagine how you'd do against the various contestants. It's also fun to see what klutzes some of the athletes are.

So far the events have included a 1.1 mile bike/run (where the teams could switch off on the bicycle at any point), a kayak race, a 100 yard relay race, a long jump (off a pier into the water), and an obstacle course.

The most memorable part of the first show was the final elimination event, the obstacle course. Football player Terrell Owens, the most prominent athlete there, was paired with model Joanna Krupa, the most beautiful woman. Terrell got his leg caught in the ropes while getting over the cargo net. He floundered like a helpless fish while the other team got ahead. Krupa, waiting for him back at the starting line, cursed viciously. After it was all over she cursed him some more: "You're the one who fucked up. We'd still be in the game if it weren't for you." She then stalked off, her muttering caught by the cameras: "And he calls himself an athlete...What does he get paid a million dollars for?"

(He gets paid a lot more than that, Joanna.)

The sight of a petite white woman viciously cursing out a big, muscular black man for his lack of athletic skills while he just stood there and meekly took it seemed weirdly anomalous. (It's possible that the producers told them to play it up.)

As they walked off, Krupa complained even more, and Terrell could only manage, "I feel sorry for your boyfriend."

I don't. (Check picture above.) It does seem that Krupa has a case of learned narcissism though. A woman who looks like that expects the world on a silver platter for good reason -- because most men are willing to hand it to her that way, no matter how unpleasant she acts.

It seemed strange that the producers would let the pair with the most star attraction go after the first show. (There go the ratings.) But sure enough, at the beginning of the second show, it was announced that Jennifer Capriati had exacerbated an injury and had dropped out, which meant that the last team eliminated got to come back. Hmm. Got to wonder how that scenario was arranged behind the scenes. (Does Jennifer need the payoff money that badly?)

Owens is a remarkable physical specimen, as can be seen above. Thanks entirely to him, he and Joanna won the 100 yard relay. Running in the sand, T.O. looked as hard and fit and tall as Usain Bolt. Most amazingly, he looked about as fast, too. The two men even have somewhat of a facial resemblance. Both enjoy clowning around, too. On the second show, Owens felt absolutely no inhibitions about loudly razzing everyone else during the long jump competition, even after he had scored zero on the event himself by not clearing the distance he had set.

The two white male athletes looked surprisingly soft. Bode Miller, the champion skier who is still active, and Jeff Kent, the recently retired baseball player, both looked like typical suburban dads you might see at a summer barbecue, more sports fans than athletes. Miller's legs looked fairly strong, and you could still see some power in Kent's upper body, but both had rolls of fat around their midsections that did a good job of disguising their athletic pedigrees. The impossibly muscular Owens, as my son pointed out, looked as if he came from a different species.

In fact, two of the actors looked fitter than either Miller or Kent: singer Julio Iglesias, Jr. and Dan Cortese. Cortese, though well muscled, has the look of a gym rat more than an athlete. (He is an actor, after all.) And sure enough, he had to drop out after injuring himself in the 100 yard relay. Iglesias seems a more tightly wound personality, not nearly as effusive as the others, most of whom were very huggy and kissy after their events. Iglesias made up for it by long jumping a surprising seventeen feet, however. (It was gratifying to watch the show biz types beat the athletes.)

Some of the actresses looked a bit past their prime as well. When I first saw the plump Estella Warren, with whom I am not familiar, I assumed she was a character actress. I was amazed to find out when I Googled her that she had in fact started as a model, and had photos to prove it. The extra 20 or 30 pounds she was sporting had given her a sort of frog face. Perhaps there had been some recent illness for which she'd had to take cortical steroids; otherwise there's not much excuse for not getting in shape for the show.

I'm not a football fan, but know enough through simple osmosis to realize Owens is generally considered a bad guy. He is unpopular among former teammates and is known for publicly badmouthing them. But he came across reasonably well on the show. All his trash talking seemed good-natured. He was a sport about being being dressed down by Krupa and downright forgiving to her afterward. Imagine the class clown on steroids.

I can't in good conscience recommend the show, since it's such a complete waste of time. But I've found it strangely compelling.

Addendum, 7/7/09: Just watched the third episode. Incredibly boring. Please do not watch, or if you do, at least please don't blame me for the time you wasted.
Posted by John Craig at 8:21 AM