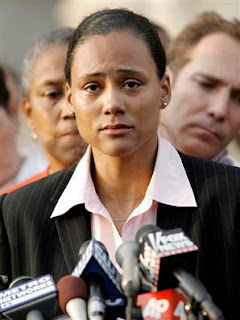 An AP article about Tim Montgomery today reported on why Montgomery used steroids (he wanted to beat Maurice Greene) and his subsequent ban from track and field. The article also discussed his incarceration for having taken part in a check kiting scheme.

The most interesting part of the article came when Montgomery talked about Marion Jones, the mother of his child and formerly the world's fastest woman.

Montgomery said that Jones could make herself cry for the cameras and that her "best work" came when she passed a lie detector test.

I've never known of anyone who wasn't a sociopath who could just will themselves to cry on command. (Tonya Harding, another disgraced Olympian, was also known for this ability.)

Hearing about this ability brings back memories of all those times Jones brazenly and self-righteously denied her involvement with steroids and talked about how drug use was wrong.

Passing a lie detector test is another sociopathic specialty. Polygraphs measure respiration, pulse, blood pressure, and skin conductivity. Lying is stressful for a normal person, so the machine measures stress. The only type of person for whom a lying is not at all stressful is a sociopath.

I'd thought Marion Jones was juicing long before she was actually caught. But this is the first time I ever thought of her as a sociopath.
Posted by John Craig at 3:31 PM

I was surprised to learn that Marion Jones is a sociopath. There are SO many of these people in our midst, our world. It can be unsettling.

Birdie --
She was a surprise to me, too.