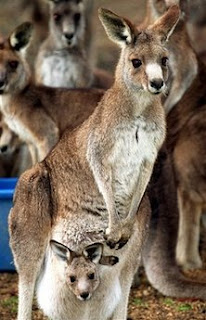 From Monday's news, via the AP:

MELBOURNE, Australia – A kangaroo startled by a man walking his dog attacked the pair, pinning the pet underwater and slashing the owner in the abdomen with its hind legs.

The Australian, Chris Rickard, was in stable condition Monday after the attack, which ended when the 49-year-old elbowed the kangaroo in the throat. He said he was walking his blue heeler, Rocky, on Sunday morning when they surprised a sleeping kangaroo in Arthur's Creek northeast of Melbourne. The dog chased the animal into a pond, when the kangaroo turned and pinned the pet underwater.

When Rickard tried to pull his dog free, the kangaroo turned on him, attacking with its hind legs and tearing a deep gash into his abdomen and across his face.

"I thought I might take a hit or two dragging the dog out from under his grip, but I didn't expect him to actually attack me," Rickard, 49, told The Herald Sun newspaper. "It was a shock at the start because it was a kangaroo, about 5 feet high, they don't go around killing people."

Dogs often chase kangaroos, which have been known to lead the pets into water and defend themselves there.

Rickard said he ended the attack by elbowing the kangaroo in the throat, adding Rocky was "half-drowned" when he pulled him from the water.

What an interesting and effective way for the kangaroo to defend itself.

Australia has long been known to zoologists for its unique fauna. The other continents all have relatively similar animals. Asia, Africa, Europe, South America, and North American all have (or had, in Europe's case), big cats. Asia has the tiger and the snow leopard. Africa has the lion, the leopard, and the cheetah. Europe used to have the lion. North America has the cougar, and South America has the jaguar. There is some overlap (jaguars have been spotted in North America, and there is a small population of Asian lions), but each continent basically has its own version of a large cat. Australia has none, unless you count the Tasmanian Tiger, a unique cat/dog hybrid which may or may not be extinct, depending on whether the recent sighting reports are to be believed.

(Africa actually has its own version of a cat/dog hybrid, the hyena, which, surprisingly enough, is actually more closely related to the cat family than to the dog family.) But most of the continents have similar canine, ursine, porcine, and ungulate species as well, with varying subspecies.

The ten most poisonous species of snake all live in Australia. Roughly 30,000 people a year die of snakebite, and 25,000 of those are in South Asia. This makes sense, when you think of all the poor people who work barefoot in rice paddies and live in primitive open air housing with cobras and kraits and Russell's vipers slithering around. You don't hear of as many people being killed by snakebite in Australia; that's because most of the really poisonous snakes live in the Outback, where there just aren't that many people. Australia is an entire continent with a population of only seventeen million.

North America was until recently home to much more spectacular animals than now roam the continent. A mere 10,000 years ago -- the blink of an eye in evolutionary time -- we had saber-toothed tigers, woolly mammoths, 500 pound beavers, giant elk, and giant ground sloths wandering the continent. Hard to imagine them wandering among the subdivisions and freeways today.

One of the most fascinating things about wildlife are the number of species which are still being discovered. Most of these are various kinds of subspecies of insects, or small fish. And many of the unknown species are supposed to live in the shrinking Amazon rainforest. But there have been 408 new species of mammals discovered since 1993. Some of the more notable of these include the so-called barking cow in Laos, a new rhinoceros species in Viet Nam, and a giant peccary in Uruguay. And 25 new species of monkeys have been discovered (including 9 lemurs).

There are certainly plenty of wild places left away from the Amazon rainforest which could harbor unknown species. Even a place like the United States, which we tend to think of as very civilized and even overdeveloped, has lots of wild areas. We have a tendency to think of the entire country as being like the suburbs or cities where we live, with a few national parks thrown in to remind us of what the continent used to be like. But the next time you fly across the country, look out your plane window. Most of what you see is green (or brown, depending on the time of year). The towns seem few and far between.

Who knows what species we have yet to discover.
Posted by John Craig at 10:59 AM

Much greater chance of the existence of a Tasmanian Tiger than, say, BigFoot. Which, believe it or not, some people STILL think exists.

Mike -- As you can tell, I'm slowly building up the nerve to talk about that; haven't quite yet, though.

In any case, I certainly appreciate your encouragement.