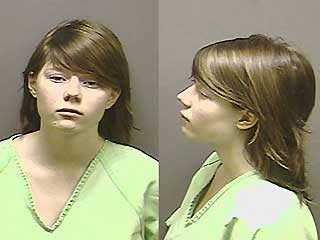 From the AP this morning:

Girl, 15, Charged as Adult in Murder

Police Say She Killed 9-Year-Old to 'Know What It Felt Like'
By DAVID A. LIEB
AP

With HP wireless printers, you could have printed this from any room in the house. Live wirelessly. Print wirelessly.

JEFFERSON CITY, Mo. (Nov. 18) - Blessed with a Friday off school, 15-year-old Alyssa Bustamante dug two holes in the ground to be used as a grave, authorities said. For the next week, she attended classes, all the while plotting the right time for a murder, they said.
That time arrived the evening of Oct. 21, when Bustamante strangled 9-year-old neighbor Elizabeth Olten without provocation, cut the girl's throat and stabbed her, prosecutors said. Why?
"Ultimately, she stated she wanted to know what it felt like," Missouri State Highway Patrol Sgt. David Rice testified Wednesday during a court hearing over the slaying.

It's surprising how often one hears of a motive like this for murder. Most people, upon hearing such a statement, usually assume that there must have been some other, hidden motive, like a long standing animosity, or jealousy, or somesuch. But with a sociopath, a mild curiosity is all it takes.

You can't understand sociopaths until you can fathom their absolute lack of consideration for other human beings. To them, you're no more than a toy, to be discarded when they have no further use for you. The problem with recognizing sociopaths is, they are often so good at counterfeiting the positive emotions (love, affection, loyalty, gratitude) that at first you are apt to think them actually nicer than average. But they are merely acting. The only reason most sociopaths won't kill you is that they don't want to be bothered with the possible repercussions.

It's hard for a normal person to get his mind around such an alien mentality. But it's better to understand them, and be on your guard against them, than to let them catch you unaware.
Posted by John Craig at 11:02 AM

Very chilling. It's difficult to comprehend how different they are.

BTW, I wonder how many sociopaths work on Wall Street? And are they traders or CEOs - or both?

Anonymous -- Thank you for your comment. Yes, it is chilling. I've always felt there are certain professions which attract more than their fair share of sociopaths, and business, especially Wall Street, is one of them. I worked there for twelve years, during which time I did a lot of involuntary field work, so to speak, in my study of sociopaths. They are both traders and CEOs, to answer your question.

Two other sociopath magnets are Washington DC and Hollywood, both centers of money and power. I suspect that law enforcement gets more than its fair share of sociopaths as well (witness the number of serial killers who at one point applied for work in that field).

What a lifeless face! There's absolutely no remorse or fear in it at all. It's hard to imagine that Ms. Bustamante could exhibit any emotion, much less a positive one. But I suppose it's not that difficult to fool a 9 year old who's never encountered a sociopath.

It makes me wonder what Ms. Bustamante experienced in her very young life to turn her into such a monster. If she was born that way it's even more frightening.

Anonymous -- Thank you for your comment. I'm not sure anybody would be at their best in a mug shot, but yes, she certainly looks expressionless (though we all look that way at times).

The scary thing about sociopaths is that not only can they fool 9 year olds, they're pretty adept at fooling adults, too, at least at first.

One clue as to Bustamante's early upbringing was stated later on in the article, which implied that she had been brought up by her grandmother, meaning, both parents were missing, though her mother was also mentioned (meaning, she's still alive). Sociopaths don't necessarily have to have had abusive upbringings (though that helps), often they simply never formed a bond with a parent in the first year or two of life, which generally means they can never form a close bond with another human being later on in life. This is why so many kids who grow up in orphanages turn out to be sociopaths. (Not all of them, just a higher percentage.)

Some serial killer were abused children, however. I mentioned Edmund Kemper in the post; his mother used to make him sleep by himself in the basement of their house, right next to the noisy furnace, even though it terrified him. (He later killed her, cut her head off, placed it on the mantel, and threw darts at it for a few days before burying the head in their backyard.)

I love how you all talk about how chilling it is, how we have an 'alien' mind set. It actually makes me laugh because I look at normal people and think, 'god I wish they could see into my mind'. To be honest, humans just seem like mannequins to us, even other psychopaths. You are just too predictable.

Anonymous Psycho --
Thanks for that insight. In the post I mentioned that we (normal people) are just toys to sociopaths, you just confirmed that: We're nothing more than mannequins, to be discarded when broken.

According to a psychiatrist I know, plenty. Including a few presidents. When you can send thousands to their deaths (war), watch body bag after body bag come back, and see mothers weep and sleep at night, you are one. After all getting to the top takes a certain amount of ruthlessness.

Yes, you think we are all stupid. Believe it or not some of us are not fooled by you. Some prey trust no one.

Who cares. There's nothing inside. Nothing to see there. I don't care why. I only care that you did it. Now lock that thing up.

Paulie --
You've obviously had some experience in your personal life with sociopaths. With most of us, once we've gotten to know one, we're forever after suspicious.