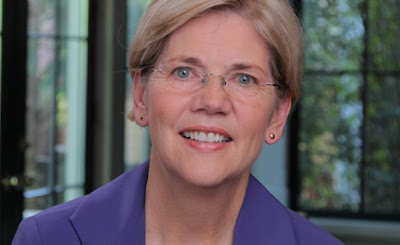 In the wake of the controversy over whether Elizabeth Warren, Democrat and US Senate candidate from Massachusetts, was justified in claiming minority status as a Harvard Law School professor due to her 1/32nd Cherokee heritage, Just Not Said has obtained an exclusive interview with the candidate.

Just Not Said: Ms. Warren, we appreciate your granting us this interview.

Warren: Oh, thank you, I'm happy to have this opportunity to clear the air.

Just Not Said: So tell us a little about yourself. What was it like growing up in Oklahoma?

Warren: It was extremely difficult. You have no idea of the sorts of prejudice I faced growing up there as a Native American.

Just Not Said: Give us some examples.

Warren: Well, being the only Cherokee at my high school there was just very tough. The other kids would always tease me, and call me "Geronimo" or "Sitting Bull." Whenever I would go to a party, there was always some wit who would say something like, "Don't let her drink, Indians always go crazy when they have firewater." Or if there was a drought, the others kids would ask me to do a rain dance. For some reason they always thought that was quite funny.

Warren: Oh that wasn't the worst. One time this really obnoxious boy who was in my tenth grade Civics class said, "Hey squaw, got any wampum?" I was so offended.

Just Not Said: Your childhood sounds very difficult. But things must have gotten a lot better for you once you got to Harvard Law School.

Warren: Oh believe me, even at Harvard Law School, there's still plenty of prejudice. It's more subtle, but it's still there. The other faculty members will be overly solicitous, or too friendly, and say stuff like, "Oh, I really like Indian culture." You know how Cambridge is. They're trying to be nice, but they always come across condescending, and just end up making me feel different. But the thing is, I'm not all that different. I mean, if you look at my features really closely, you can actually see that I have a little white blood too.

Warren: Well, they like to think so. But you can just tell that all those nice white people would be more comfortable if I'd just stayed on the reservation. Let's face it, they're just afraid of me.

Warren: Just the other day I was alone in a room with Professor Dershowitz, and I took a step towards him, and he just fell on the floor screaming, "Please don't scalp me! Please don't scalp me!" I assured him I had no such intention. When he got up he actually seemed pretty embarrassed, but for a moment there, you could really see the terror in his eyes.

Just Not Said: But you don't come across like a threatening sort.

Warren: Believe me, that doesn't stop those law school types from getting real jumpy around me. And now the Scott Brown campaign is making it sound as if I'm not even a genuine Indian. After all I've been through. It's very disheartening.

Just Not Said: We can see how it would be. Well, good luck with your campaign.

Warren: I tell you what, if I don't get elected, the people of this stupid state can take their lily white asses and stuff them.
Posted by John Craig at 10:39 AM

John, Is it possible that no proof is required when you state that you are a minority seeking preferential treatment? Do you think a place like Harvard doesn't really care whether she is or not -- that it just wants to be able to say it employs a certain percentage of minorities? Was it just a game that served both of them?

Anon --
It sure seems as if the answer is yes to all three of your questions.