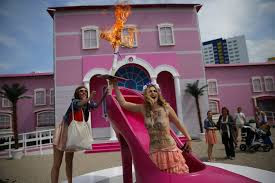 Those indefatigable crusaders for social justice, the women of FEMEN, have been at it again. Last Friday they brought their special brand of protest to a life-size Barbie Doll house in Berlin, Germany. An excerpt from the Yahoo News article about it:

Promoting the doll made by Mattel Inc, the house allows paying visitors to try on Barbie's clothes, play in her kitchen and have a go on her pink piano. The exhibition will be open until August 25.

A handful of protesters gathered outside the shocking pink house that has been erected in one of central Berlin's greyest areas.

A topless woman, a member of the Femen protest group, who had the slogan "Life in plastic is not fantastic" scrawled across her chest, set fire to a Barbie doll tied to a mini crucifix.

"There's too much emphasis on becoming more beautiful and on being pretty and that puts an awful lot of pressure on girls..."

Hmm. "Life in plastic is not fantastic." It doesn't really make any sense -- plastic isn't alive, and plastic dolls are nothing but fantasy. But hey, it rhymes, and that's what counts.

We've all heard the feminists' litany of complaints about Barbie dolls before: how they emphasize domesticity and not careers, and how they present an unrealistic body image for young girls.

Of all the things for feminists to protest, this would seem to rank pretty low on the list. In some Muslim countries, they chop the clits off little girls, don't allow them to go to school, force them to cover up in burkhas, and forbid them from leaving their houses unaccompanied by a man. And if a woman commits adultery, she is stoned to death. 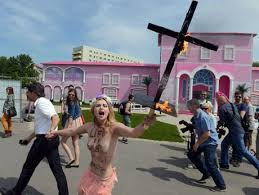 Put yourself in the shoes of a 6-year-old girl whose father has taken her to see a life-size replica of her favorite dollhouse. You've been eagerly looking forward to this for weeks, but when you finally get to the magical house, you're greeted by the sight of a half naked woman burning your favorite doll while it's tied to a cross. Then, when the police come to cart her off, she starts screeching hysterically.

Which would you be more traumatized by, that scene -- or a doll which does not have precisely correct anatomical proportions?

Yes, the women of FEMEN are doing their bit to help little girls everywhere.

Check out these women (protesting against Berlusconi). Maybe non-FEMEN women should sue them for presenting an unrealistic image of what most women look like. How many women do you know who are this svelte? 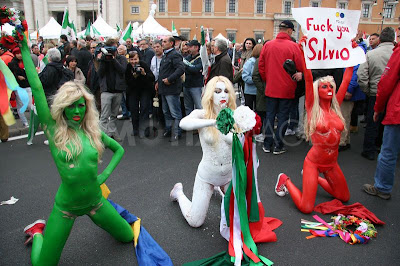 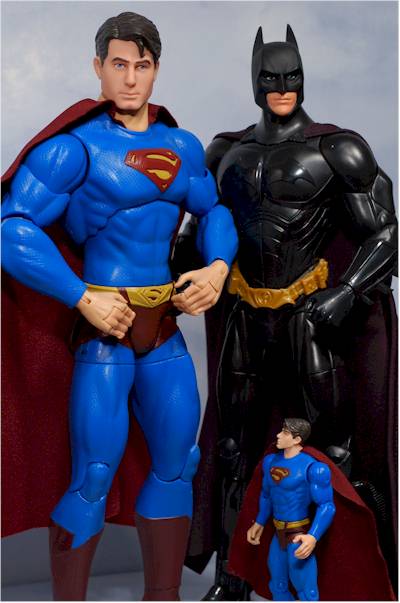 Of course, for Superman to be built that way is understandable. After all, he had to develop those super muscles on Krypton. But Batman was just a rich dilettante who was born here on Earth. It's a bitter pill for most of us to swallow when we realize that, at best, we're going to grow up looking a lot more like Robin: 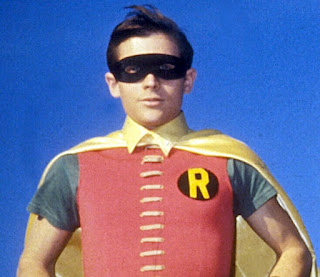 Are Batman and Superman to blame for the current epidemic of steroid abuse among young men? Maybe my problems are all DC Comic's fault. I certainly feel inadequate every time I see a picture of the Caped Crusader. Holy insecurity!

C'mon guys, let's hold a protest outside their offices tomorrow -- life in plastic is not fantastic!

So, once again: why do only women protest this sort of thing? Are women more intrinsically silly? That's debatable. But they're certainly sillier in this particular way.

How will these women feel about their youthful protests when they're 40? How many of them will look back and feel a little embarrassed about their hysterical behavior? (How many will be proud?)

These women are spoiled, addled, hypocritical, exhibitionistic morons. There, I've said it.

They're welcome to come to my house to protest that statement, though.

Just make it, you know, sometime when my wife is away.
Posted by John Craig at 10:06 AM

Psycho-bitch-hood, thy name is Femen.

Straight-talker, thy name is Allan.

These femi-nazis protest at the Barbie house in Western nations because it's safe. They know they probably won't be arrested, and it will be a big media show. It's 'cool' to be a feminist in a country where there's no consequences for your actions, and where half the people are dumb enough to think you're a victim of male oppression.

But the real tragedy in Muslim lands where women really are violated and abused, these same feminists wouldn't dare pull off this kind of mindless nonsense. They know they'll be immediately arrested, if not raped by the male crowds beforehand. These are just silly, foolish women who have no idea what genuine victimhood and female oppression really is.

Ambrose --
I was thinking the same thing, that they would never dare protesting for feminism where it's really needed. (Not that I would dare to do that, either.) But their hypocrisy reeks.

It reminded me a little of how a few years back when the gay marriage referendum was voted down in California, the gays stormed into the Mormon churches and threw condoms at the church-goers, etc. Meanwhile, the black pastors had come out against gay marriage just as strongly as the Mormon church had, but the gays would never have dared go into the black churches and carry on the same way, because there might actually have been consequences there.

The other weird thing that your comment reminds me of (with your use of the word "feminazi") is how most of them tend to be unattractive Bella Abzug-types, but the women of FEMEN tend to be extremely attractive. My guess is that the organizers themselves are not much to look at, but they select the best-looking young recruits in order to gain more attention. If someone who looked like Bella bared her chest it wouldn't draw nearly as much attention, so it's good marketing, I guess.

These women are very attractive which is extremely unusual for feminists.

We have a gay mardi gras in my city once a year. A community television interviewed one of the dancers (a very good looking man) anyways... he replied that he was just a dancer and was employed to be in the parade. I have heard this a few times since but not in any media. Paid people to present an image which is far from reality.

I think these women treat the Femen thing as some kind of entertainment before they get pregnant and live out there life. I also think a lot of women treat employment like this, spend 4 - 6 years at university (wow that was fun!), ten years in the job then move on and think wow?! that was even more fun! Yey fun stuff!

"Put yourself in the shoes of a 6-year-old girl"
Tried that once. Turns out, there's a law against it.

W O D --
I agree that paid models present a misleading image far from reality, but I doubt that these women are paid models. I think they're just young and naive and swallow the liberal propaganda they've been fed and think they're engaged in a good cause.

Your timetable for some of these women is probably right. It's occurred to me that some of them are actually husband-hunting, in a roundabout sort of way. Or at least, boyfriend-hunting. Or who knows, maybe girlfriend-hunting. But a good-looking young woman has the world handed to her on a silver platter, so doesn't really have to worry about things the same way everybody else does.

Anon --
No law against dressing up as a full grown woman; I'd suggest trying that instead.

There’s a song about Barbie, apparently by a band called Aqua, one of the lyrics is:

I'm a Barbie girl, in the Barbie world
Life in plastic, it's fantastic!
You can brush my hair, undress me everywhere
Imagination, life is your creation

Ed --
Aha, thank you. So that dumb rhyme isn't quite as out of left field as I thought.

I'm actually about to write another post about dumb rhymes being a substitute for thought in certain circles.

Splendid insight! Linked and riffed on over here:
http://ex-army.blogspot.com/2013/05/barbie-and-hulk.html

I understand those Femen women are actually paid employees of the organization. The salary is fairly high relative to where they're from and they have to apply and audition for the job. Obviously, it's a created group otherwise there'd be a wider variety of ages, weights and appearances. Soros money is said to lurk behind it.

Pete --
Wow, so W O D was right. I had thought that they just selected the prettiest volunteers to do this. (Hope you find my naivete charming.) Now that I think of it, it does make sense, these women are an extremely good-looking group.

Just looked it up on Wikipedia, yes, this info came out in march of this year. Wiki says that FEMEN is funded by someone named Jeff Sunden, whom I've never heard of, and that the activists get paid 2500 Euros a month, and the protesters get paid 1000 Euros a month. (Not sure what the difference between those two groups is.)

Well, thanks Pete, my eyes have been opened. I'd certainly be curious to learn how these paid protesters earn money when they're not demonstrating for FEMEN. I'd guess that some of them are strippers.

I didn't know there was proof they are paid I just made the guess.

The good looking dancers in the Mardi Gras go home early after the parade to their girlfriends(and think thank god that's over where's my paycheck?)

Paid supposedly gay dancers, paid supposedly femenist protesters. What is the aim of all of this? or is it too sociopathic for normal people to believe?

W O D --
Well it was certainly a good guess.

It's all about PR, I guess. I'm not sure I'd put this quite in the category of a sociopathic deception; it's more like any professionally shot commercial with a good-lookig model. Except the difference, I guess, is that nobody is supposed to believe that the people in the commercials are "real," whereas particularly naive people -- like me -- believe that the FEMEN protesters were actually heart and soul feminists.

"why do only women protest this sort of thing?"

good question. Maybe because men aren't judged primarily on their appearance, as women are.
Maybe because men just passively accept whatever metric they’re judged by and dive right into the competition, and never question whether it makes any sense at all...

"Which would you be more traumatized by, that scene -- or a doll which does not have precisely correct anatomical proportions?"

Well, gosh, lets see –
one more weird 2-minute incident among the thousands that make up an average childhood, or a lifetime of insidious brainwashing so subtle she doesn’t notice it, that causes the kind of neurotic crazy that men always bitch about?

Anon --
Thank you for providing me enough material for another post. I've responded t your comments in a new post, dated 8/16/14: