I got my Ancestry.com results yesterday, and, as I had suspected, I am not quite as advertised.

So, it looks as though my mother is a touch less than pure Japanese. As a good Japanese (from Japan) she should have been dismayed by this information, but when I conveyed it to her last night, she just laughed and said, "So that's why I have this hook to my nose."

Then she asked me how much I paid to have this test done. When I told her $109, she then asked, well, was it worth it?

The 13% central European is no great surprise; my father always said he was an eighth German, which would have made me roughly 6% central European; and the British Isles were invaded by plenty of different Continental types over the years.

The big surprise was the 8% Finnish/Volga-Ural. Or maybe it wasn't such a big surprise, at least to me: even though many people take me for Hispanic, maybe the guy who mows their lawn, I've always seen myself more as a Scandinavian beauty.

The eight percent "uncertain" certainly leaves a fair-sized chunk of uncertainty. Oh well, maybe it's better to preserve a little mystery. And a lot of possibilities.

Ancestry.com's explanation for "uncertain" is: "This means that small traces of a specific genetic population may have been found in your DNA, but the probabilities were too low to pinpoint it to a specific ethnicity. This is not uncommon, and as more genetic signatures are discovered with a higher confidence level, we may be able to update this 'uncertain' percentage of your ethnicity over time."

This leaves open the possibility that I am part American Indian or black, as I originally speculated. But those genetic signatures are probably pretty well well documented. The "small traces" and "low probabilities" point toward something more exotic. Like Neanderthal. Or Homo Floriensis.

Or maybe they couldn't figure it out because I'm 8% nonhuman. I'd prefer that mix to be tiger, with a little wolverine mixed in. But, given my cowardly nature, there's more than a little likelihood of worm, as well.

It could just be that the "8% uncertain" is merely a straightforward reference to my personality. (I always seem to feel a tad less sure about things than many people I know. My wife, for instance.)

I'd like to hold out the possibility that I'm 8% immortal. Maybe I'm descended from Hercules (who was only half immortal himself).

My 18-year-old daughter, who is nothing if not topical, suggested we could be part vampire.

I may go to another service (most likely 23andme, which also evidently gives you a profile of your inherited health conditions) just to see if the results match. And if that 8% uncertainty can be cleared up.

In the meantime, I'm planning on a trip to Helsinki, where I can meet Finns like this one -- 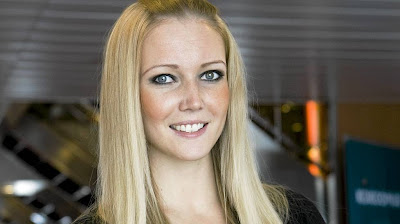 > The big surprise was the 8% Finnish/Volga-Ural. Or maybe it wasn't such a big surprise: even though many people take me for Hispanic, maybe the guy who mows their lawn, I've always thought of myself more as a Scandinavian beauty.

It's a shame Finland isn't a Scandinavian country in this sense ;)

Anon --
You're right; I actually did a little research last night and it turns out that the Finns (especially the Lapps), unlike the Swedes and Norwegians, have some Mongolian admixture. I Google-Imaged "Finnish people" and there were plenty of Nordic types, but also a fair number of blondes with epicanthic folds.

Years ago I knew this young lady that had a native grandparent.

The natives in Canada are a registered, designated victim group that are so pathetic that on reservations they get

They get all that by being genetically eligible to carry a native card (for all intents and purposes, a 'race card').

In any event this lady applied for the card and got it because one of her grandparents was a full blooded first nation freeloader - making her eligible to be one too.

As a result her taxes were negligible and she got all kinds of perks...but to look at her you would think she was 'whiter' than I am.

This ass-hattery has left me convinced that toy poodles are actually wolves and that we should have picked our own goddamn cotton, and that the US Cavalry only did half the job in the American western frontier!

I should get financial compensation too!

Glen --
No question, civil rights has been turned on its head. Now all the official discrimination goes the other way, but they're still acting as if it's the 1955 JIm Crow era. Look at the way they're equating Trayvon Martin with Emmett Till. Till was lynched because he talked to a white woman; Martin was killed in a self-defense shooting because he was sitting on top of another guy punching him in the face. But as far as the libs are concerned, there is no difference. Insane.

Your mom isn't necessarily "only 98%" Japanese. With that 8% uncertainty, she might be 114%. Kinda disappointing they just call it "East Asian". Can't they narrow it down to Chinese/Japanese/Korean/etc? With such inexact DNA testing even today, maybe the jury was right to set OJ free-at-last 20 yrs ago.

Anon --
Actually, the 8% uncertain was something other than the identifiable major groups they can identify, from what I understand. It's quite possible there's some sort of subset of Asian genes they're not comfortable with naming yet, but if it had been standard East Asian, which is what she theoretically is coming from Japan, they would have just said 50%. But you're basically right, the 49% is probably just some sort of rounding error, I just wanted to tweak my mother a little. On the other hand, Ainu are proto-Caucasoids, so who knows. Their blood got mixed up with Japanese blood back when they were samurai.

I'm probably going to go to 23andme to see if they do a better job. Also curious to see how my kids come out.