This blog has mentioned in the past  -- here and here, among other places -- that it's generally only sociopaths who go out of their way to tell you what wonderful, caring, ethically upright people they are.

This morning's Post had a great illustration of that in an article about Anna Benson, the soon-to-be-ex-wife of Mets pitcher Kris Benson:

Crazed “Baseball Wife’’ Anna Benson yesterday told The Post, “I’m all about good, I’m all about love’’ — but she sure has a strange way of showing it.

The 37-year-old mom of four and ex-Penthouse Pet was dressed like a ninja and armed with a revolver, ammo belt and bulletproof vest when she entered the Georgia home of estranged hubby and former Met Kris Benson demanding dough and calling him a “p---y,’’ police records allege.

“I’m not feeling very good, as you can imagine,’’ Anna admitted to a Post reporter from the Cobb County Jail in Marietta.

“None of it is true, but you’ll find that out.

“I’m a good girl, a nice girl,’’ insisted the buxom ex-stripper, who now says she wants to start a bulletproof-vest company. “I would never hurt [Kris]. I am still in love with him."

Nor do nice girls say, "I'm a good girl, a nice girl." Truly nice girls tend to just act shy. If you actually ask them if they're nice, they'll say something like, "I don't know" or "I try to be." They certainly don't go around broadcasting it.

Nor do they call their husbands pussies.

Benson, by the way, not only had a revolver with extra ammunition, but also a folding knife, and an expandable baton. The police also found a hatchet, a Taser, a bag of syringes, and a box full of pills in her car.

All standard equipment for nice girls.

Here's a picture of the still-married couple: 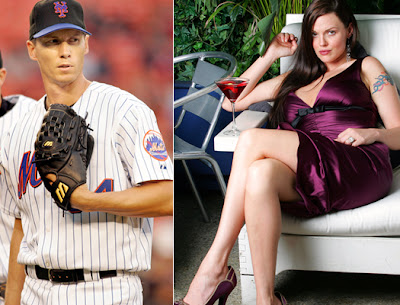 Anna Benson actually does look as if she's all about love. Just maybe not the kind she was trying to imply.
Posted by John Craig at 9:01 AM

Am perfect behavior on Bizarro world.

Now if Anna Benson beat face against brick wall until bruised and bloody, be big catch on Bizarro world.

I wonder how much of this (Kris Benson getting involved with this psycho) can be attributed to the glamorization of crazy b****s and hoodlums from Hollyweird.

Here is a link to an article on the effects of TV on the human brain:

The article could be applied to movies as well.

Bizarro --
Yes, that's how it would work in a topsy turvy world (although this post was not written in that style.

Allan --
Interesting article, thank you. And I agree with you (and it) that TV manipulat4s in all sorts of ways, both subtle and not so subtle. But my guess with Kris Benson is that his attraction was more instinctive. He probably first saw her at a strip club, was thus attracted to her, and fell for her flattery of him; he also probably saw her as the hottest piece he'd ever had, and so married her. (Many guys do this, though it's rarely put in those terms.)

She in turn probably saw him as a cute guy who could provide her with financial security, another time-tsted motivation to get married. All of this is just speculation, but it's not too much of a leap.

Anon --
Thank you, I hadn't been familiar with that bit of pop culture. Now it makes more sense. My kids used to talk about something similar, Opposite Day, which was at it sounds; mostly they used it to insult each other. Sort of the same way saying "Not" after a compliment was an insult a few years back.

Telling everyone about how much of a nice person you are is also a trait of sub-sociopathic narcissism - I knew one guy at university who described himself as an "all round good egg" on his Facebook profile, even though one of his favourite hobbies was slander and running smear campaigns. Genuinely nice people don't need to brag about it because they know everyone will recognise their virtue automatically.

She looks a bit conceited from the way she's sitting and the clothes she's wearing. That smug facial expression, the way she's holding her wrist, the dress showing off her legs and cleavage....it all seems contrary to the "nice girl" image she's trying to promote. Obviously, there are nice girls who do wear skimpy dresses, but they don't have such smug expressions when looking at the camera.

Also, the tattoos that genuine nice girls have tend to be on the lower back, leg or ankle. Any tattoos they have elsewhere tend to be small and inconspicuous - not the prominent tattoo this woman has. Nice girls who have tattoos tend to go for ones which are easy to hide in case of any future professional commitments which would require that. Sociopaths are impulsive, so they wouldn't think of future engagements. I've known a sociopath who got a very flashy tattoo covering his wrist, having only started considering it that very morning. This shows just how spontaneous (and reckless) they are, considering that tattoos are very difficult to remove.

Then again, maybe it is just me who is being biased and reading too much into this. You're welcome to tell me if you think that's the case.

Gethin --
Actually, I agree with everything you say -- great detective work. Yes, everything about her body language says "Aren't I just the greatest?"

She also looks completely relaxed in that photo, another trait of sociopaths. They are always the epitome of cool, and hard to fluster, which is one of the reasons why people look up to them when they first meet them.

That's a great anecdote about the sociopath getting a tattoo he first considered that morning, a perfect illustration of their impulsiveness. You're right, most people would mull and ponder and agonize and get second opinions before making such a permanent decision.