The New York Times review of Dave Chappelle's comedy act at Radio City Music Hall this morning included a shock. The mildly positive review itself contained nothing surprising. They said that the huge venue wasn't suited for Chappelle's usually intimate style of comedy, and that he recycled some old material, but that he was still funny and original.

The shock was his picture. Chappelle looks nothing like the skinny guy he used to be. The print edition of the Times showed a closeup of him with a cigarette in his hand, though they used this, more distant picture for the online edition: 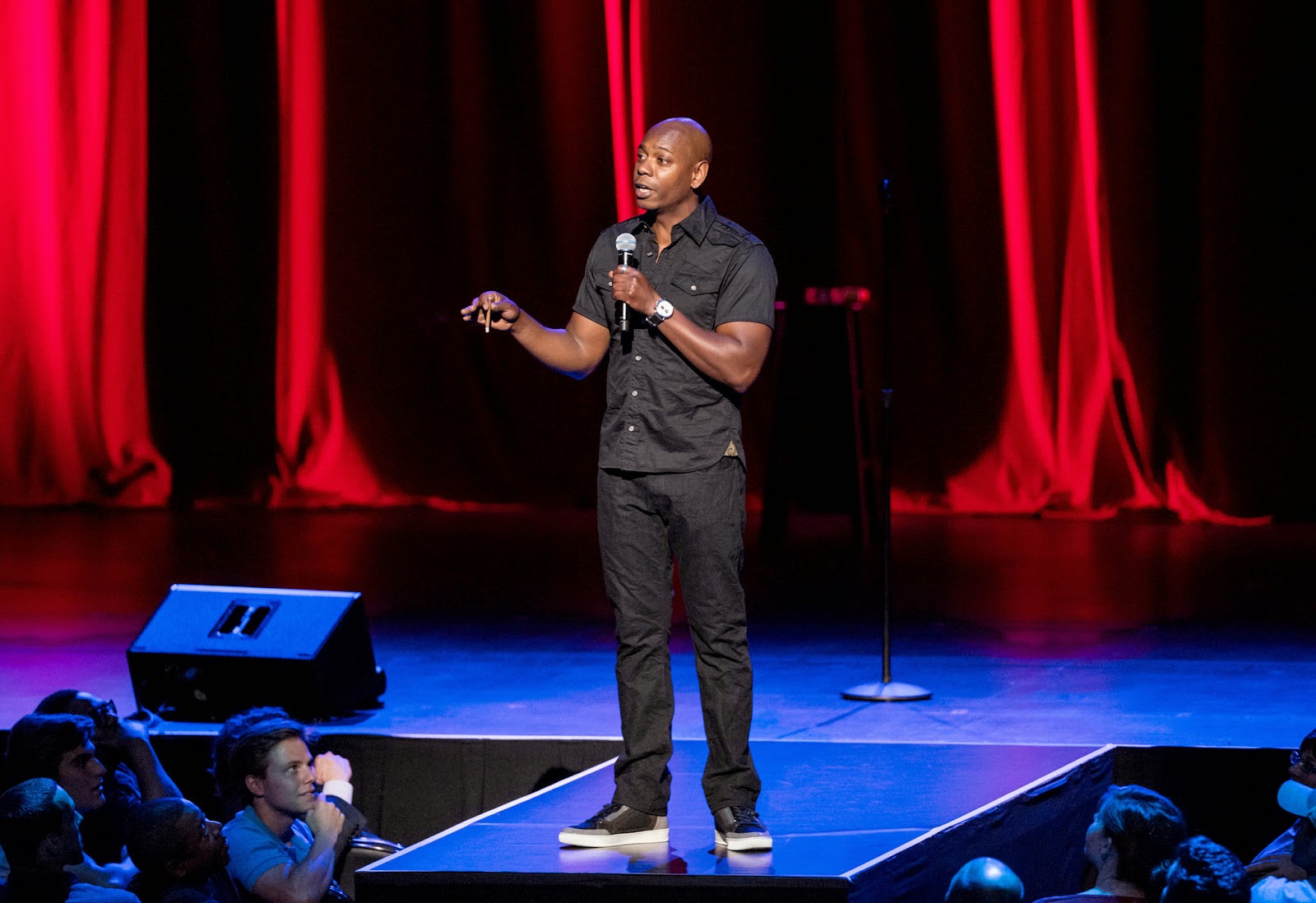 Here's the more dramatic silhouette the times included at the end of the article: 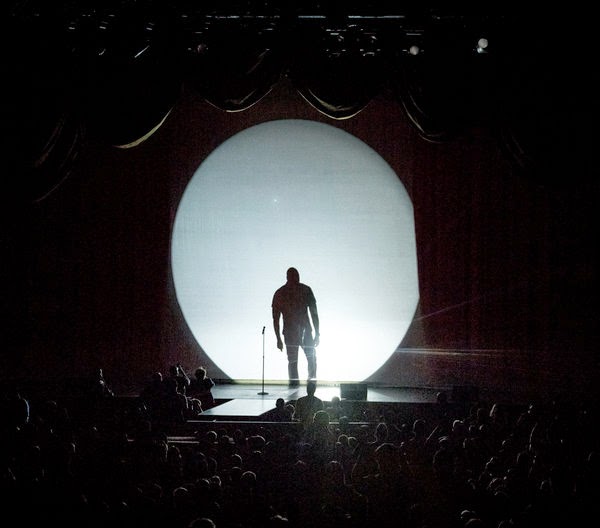 When I Googled "Dave Chappelle on steroids," I saw that a number of people had beat me to this observation. Here is a convincing before-and-after picture: 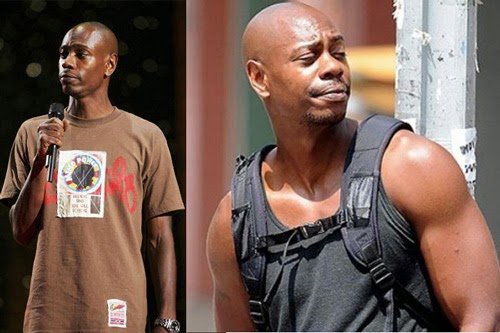 I of course can't prove that Chappelle has juiced. But he himself has offered one unmistakable piece of evidence: he now wears a sleeveless shirt -- a steroid signature as definitive as anything WADA can produce.

I don't resent Chappelle for juicing; he's not doing it to cheat at sports, only to feel better about himself. It's just a little disconcerting that he's changed his persona this way. His skinniness always seemed to be an integral part of his act, even part of what made him likable. He would occasionally make fun of his own wimpiness, and by doing so, seemed better than the guys who succumbed to the macho ethic.

Addendum, 6/25/14: Please read the third comment, by "Julie." Her description of how Chappelle walked off the stage during that infamous show in Hartford fits perfectly with the behavior of a guy feeling some 'roid rage.
Posted by John Craig at 5:03 PM

I have a real duality on the issue of steroids. People use enhancements for a multitude of things everyday. This one just happens to be one of the more noticeable ones.

Arthur --
Long time no hear from.

As I said, I don't hold it against Chapelle that he's juicing, since he's not doing it to cheat at sports. And yes, lots of people, especially old folks, take enhancements every day, including testosterone replacement therapy, which is basically steroids lite, Plus human growth hormone, and boner pills like Viagra. None of those do much harm, and in fact the potential side effects are outweighed by their benefits. So I agree with you, away from competitive sports.

Interesting observation, John. I can tell you that something is definitely up with Dave Chappelle. My husband and I were in the audience last summer at Chappelle's infamous Hartford performance, the one at which he claims he was heckled. We had been big fans before that night, but my blood starts to boil now simply at the mention of his name. I saw that article in the paper, but had to put it down before reading it all the way through.
I am tired of hearing that Chappelle was heckled when in fact something else happened that night. He was on a comeback tour with a large group of comedians. He was the headliner, and we sat through several mediocre performers before Chappelle came on stage. The audience was of mixed races and the applause was thunderous when he was announced. A few random people called out occasionally, tossing out celebrity names or references to old routines, sort of like someone calling out for Bruce Springsteen to sing Rosalita. It was a large venue, maybe uncomfortably so for him, but the calling out was not in the nature of heckling whatsoever nor was it pervasive. In fact, Chappelle was the one to give it energy. A seasoned comedian should be able to handle a few comments from the crowd. It seemed he had run out of material, and reviews of prior performances on the tour had indicated that he was light on material. He had also been touching his face in an odd way, which had caused my husband to think he was on drugs. I literally thought that the next day we would read in the papers that Chappelle had had a mental breakdown on stage. His press people, however, were quick to diffuse things by taking the offensive, saying that he left because he was heckled by a racist CT crowd. Nothing could be further from the truth. In fact, he became outright nasty with us, suggesting that he hoped we'd all die in car accidents on the way home (yes, for real)and that he was only contractually obliged to spend a minimal amount of time on the stage so he was just going to read a book for the rest of the time and laugh all the way to the bank. I lost all respect for him that day. Julie

Haven't heard from you for a long time either.

Wow, that is an interesting story. I had forgotten the story about how he'd walked off the stage, and had not paid it much attention at the time, but the whole thing now makes sense in light of the fact that he's juicing -- it was steroid rage!

How typical of the media to say that he was heckled when he was not. And how typical for his handlers to blame white racists, those convenient bogeymen, when it had nothing to d with race, Thank you for that, that was a very illuminating story.

John, after reading your article, I started checking out a few videos and recent photos of Dave Chappelle.

He's definitely filled out more and he has some size and definition to him. Still, I really didn't think he's gotten that big? He looks like he's simply become serious about body building but might not actually be juicing.

Am I wrong about this? Or are there some definite signs that he's juicing other than some aggression which might just be attributed to arrogance and greater confidence in his physique?

Ambrose --
The thing about Chappelle is, he doesn't look like the stereotypical body builder on steroids now because he started out so extremely skinny. When you compare his before and after pictures, the difference is still extreme.

Usually the dead giveaways are the humped trapezius muscles and the weird definition between the pectoral muscles, as well as a general bulginess everywhere, especially on the outside of the deltoids (Chappelle seems to have the bulging deltoids, although that's also more of a black thing). Another thing to keep in mind, these gains have come recently, and he's 40 now, well past the age when any sot of wholesale transformation could have come naturally.

Do you even lift bro? He isnt big at all. He just looks like a dude that began lifting 3 times per week and is following a bulk diet. If you think that he looks like he is juicing because he may have put on about 20lbs (not even mostly lean muscle as he doesnt look as lean anymore,) you must not lift at all.

"...he now wears a sleeveless shirt -- a steroid signature as definitive as anything WADA can produce". LMAO You gotta be kidding me. This article was ridiculous, but still entertaining. I'm hoping John was just trolling us.

Cory --
That particular line was said tongue in cheek, obviously, but I do think Chappelle went on steroids.

Reminds me of The Rock. Went from being a big guy to a massive beast! Chappelle went from skinny to just plain huge! Obviously they have the same HGH pharmacist lol

He is on bullshark test,shout out to Brucie

Im going to agree with the fact that he just looks like a guy who decided to hit the gym. His gut indicates he likes to eat so when you smoke your likely to want to eat more. When you get older your metabolism can slow down. So his choice probably was eat as much as you want and get fat or eat as much as you want work out a few hours a day and get big. Does anyone have any timeline pictures of him? That's really the way to see if hes been juicing or on any type of enhancers. If he was skinny Dave one month and huge Dave the next that could be an indicator. Listen the man made alot of money quickly from his show had a bunch of kids 3 I think and just had nothing to do. Perhaps he wanted to get out of the house and away from the kids and this was how he does it. I certainly have seen guys like Hugh Jackman and say he juiced, and I dont blame them at all there being paid to play a role, and when someone is in great shape like he usually is and then you see him in the Wolverine movies with veins on abs you have to say yes only because that's almost impossible to get that way it takes years to look like that it difficult on older frames it ends up hurting the joints elbows and usually you just end up looking like Dave...

Hey why when a guy gets angry do people immediately think well he is muscular and he's angry it must be steroids. First steroids don't always make you act that way. Nervousness and weed could. I'm not going to even say huge. I've been almost as big as him and I never thought of myself as huge. When guys our age mid 30s and he's mid 40s we take testosterone or atleast you should to prevent a whole lot of illnesses and prostate issues. You want your free testosterone to be a little above normal so you can actually workout and now keel over. So I'm sure what you saw on stage was a mixture of testosterone which can come in a daily pill like nutanix frustration and weed. All of that together adds up to what you saw. He doesn't necessarily ever been taking roids. Plus why would he? He is not an athlete he is smart he knows what steroids can do to you. Many guys after 40 start taking these supplements that help your body create more testosterone and look he's in his mid 40s and he doesn't just look like Hugh Jackman or Duane Johnson he looks like a guy at the gym. I'm sorry that you in the audience had a bad experience with him. I've paid and recieved garbage before but you also have to sometimes put yourself in his shoes. Maybe something was bothering him. Maybe he thought he wasnt being recieved as well and if he really made remarks like that I just can't see it unless he was sort of joking when he said die. Regardless I see how that hurts and how his transformation can make you think that but really it's most likely guy tried a new supplement and it really started working and he might have just started taking this and did t know how it could effect him on weed. No excuse but just saying probably not roids. In interested in actually seeing this wonder if it's on YouTube

You are so right

You had to bring Donald Trump into this?