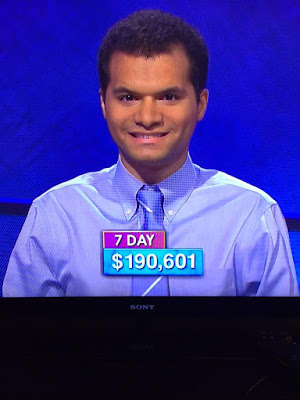 The current Jeopardy champion, Matt Jackson, is on a roll. He's won eight straight games, and over $200,000. By the second or third time I saw him win, I found myself rooting against him. He would rudely step on all of Alex Trebek's lines, not waiting until Trebek finished before choosing the next question.

Then, after he would win, he would give a completely insincere smile. He looked like a six-year-old who's been told to smile, and who does so in a purposely insincere way, merely stretching his mouth out to the sides. (The picture above doesn't quite capture it.)

Then it hit me: Jackson has Aspergers Syndrome.

If you're curious to see an Aspie in action, watch Jeopardy tonight (on channel 7 at 7 PM Eastern time). He'll probably be on for at least a few more nights; he's awfully good.

Jackson evokes the phrase "idiot savant." But idiot savants, as some autistic people used to be known, usually have just one or two subjects about which they have encyclopedic knowledge. Jackson's memory seems to encompass everything.

Anyway, he demonstrates what's both good and bad about Aspies. He's completely focused, has tremendous recall, and evinces no discernible social skills.
Posted by John Craig at 9:07 AM

I was struck by one of the commenters on that incredibly long string of comments about Asperger's you posted a while back. She said that her husband, an aspie, would have fit in to Edwardian society, with its complicated social rules and conventions. Her remark brought me to thinking that maybe it is harder for aspies in modern society because the ethic of our society is now based largely on self-expression - "acting naturally," "being yourself," "living your dreams" - rather than on moral prohibitions or social codes governing interaction. Paradoxically, or maybe not so paradoxically, it would have been easier for people who have trouble with social skills to get by and lead fulfilling lives in societies that value formality and moral prohibitions. Our society rewards those who are intuitive, know how to break the rules and not get caught (though this skill seems to be fast eroding - see our clueless elites). Our society values cunning and manipulativeness (the bestial and animal forms of intelligence) over rationality and self-restraint.

I see it as part of a dysgenic trend in which smart and gifted people are becoming alienated by a society that encourages people to unleash their appetites to fulfill their yearnings.

Penaflor --
(Sorry, don't know how to do that accent mark.) Good observations. Yes, it's true that a society in which strict rules of decorum are observed would be better for Aspies. And it's also true that we've moved in the opposite direction (although there are a new set of strict rules that have emerged regarding political correctness -- any sort of honest observation is now considered evil).

I also agree that our society rewards cunning and manipulativeness, though I don't think that's completely new. Machiavelli did write The Prince back in 1513; the the Borgias predated him. That's more a function of sociopathy than anything to do with Aspergers, and sociopathy does pay off in certain circumstances.

I would agree though that some gifted people become alienated. Matt Jackson, the subject of this post, is probably alienated in some ways, though he'll undoubtedly be able to dine out on his Jeopardy streak for a while. He, like many Aspies, is both gifted in some ways and clueless in others.

Regarding the rewards of cunning and wickedness - what is different now is that the masses regard underhanded tricks as available for them to practice in fulfilling their appetites. The cunning and scheming they practice leads not to political conspiracies but leads to the realm of the talk show or the sexual marketplace. During Machiavelli's time, ordinary people, should they have come into contact with The Prince, would have condemned the book as blasphemous. But at the same time, the multitude in those days had little hope of rising - so there was little point to endangering one's salvation.

Penaflor--
True enough about a society with social mobility rewarding cunning an wickedness more. I'd never thought of that, that's a good point. And yes, when people believe in a literal heaven and hell, they're less likely to misbehave. (Or, at least to justify their misbehavior as being in His service, a la the Crusades and the Inquisition.)

Just took a look at the Amazon summary of that book. I"m sure you're right. Such formal declarations -- which probably had a certain boilerplate element to them -- would be a lot easier for an Aspie to negotiate than the ironic or semi-ironic banter which has succeeded them.

Rifleman --
Thank you. That gives a sense of Jackson's personality but doesn't quite capture how he steps on all of Trebek's lines.

I happened to see Matt Jackson at the end of a Jeapordy show and I watched the videos that were supplied by another commenter. What stood out to me (the most) was that when Matt was moving his body, he looked awfully stiff, almost wooden like.

Birdie --
Yes, it's his body language rather than his speech that makes him seem like an Aspie. There were a couple of times during that segment at the beginning of the second half of the first half of the show where the contestants all tell some little anecdote about themselves where he appeared perfectly normal. But that frozen non-smile of a smile and his body language were off.

Having read comments about him (from another website), some viewers (I don't watch this show) disliked this man, stating that he was arrogant, so when he was on the show, they didn't watch the show. It could be that Matt was just playing the game, oblivious to how he came across to others - he might not in reality be an arrogant person.

No wrinkles on his face, smooth, people with aspergers tend to look younger and be mistaken for being teens even in their 30s because of the absence of facial expressions prevents wrinkles from forming on their face (but al gore is very wrinkly somehow). Some actually find this attractive.

https://i.ytimg.com/vi/p-kY9zBXTiQ/hqdefault.jpg
After his 5 year long TMS experience unlocking his ability to read others for the time period, there are more lines, partially due to be older and having to have built up some smile lines. But the experience has "aged him", he is more expressive and insightful in more recent interviews.

Facial expressions are learned from mimicking partially, the reason aspies tend to not use them is they have trouble recognizing other people's expressions and don't respond with their own. This doesn't mean that feelings are absent, I remember taking my autistic (classic kind) cousin out for a disney movie, sweet kid, and his face was stern. So I asked him "What are you feeling?" He said: "I am feeling so happy we can see a movie together!". Woah!

(Though I have noticed everyone looks absurdly younger nowadays than the past, how old is Elijah Wood? Rami Malek? my peers all in their 20s look younger than my grandparents did when they were 12!).

Anon --
Interesting about the wrinkles, it does make complete sense. Eventually some aging is going to set in, due to sun exposure, use of the facial muscles to eat, etc, and the loss of collagen.

Yes, it doe seem people age less quickly nowadays. It could be partly due to lower levels of testosterone (which is supposed to age you quicker) due to environmental differences, i.e., the presence of more plastic in the environment. Could be partly due to use of skin creams, which older generations didn't use as much. And partly just that people continue to exercise into adulthood, which they never did until the past 40 years or so. Oh, and I think the rates of smoking have gone down, too; that's a real ager.

Why is Al Gore wrinkly? Was he such a good passer he had to have built them up?

When you look at his childhood he got involved in many activities instead of hiding in his bedroom. He was the captain of the football team, threw discus for the track and field team, and participated in basketball. I wonder how he worked around being clumsy to be good at sports. May it was his experience of forcing himself out of his basement that lead to more wrinkles. He spend his sophmore year shooting pool and smoking weed, not exactly collecting train models.