On the assumption that everyone watches the Olympics, I'm writing about swimming this week.

Camille Muffat, winner of the 400 free, has maybe the most masterful freestyle stroke I've ever seen from a woman. She always looks effortless, as if she's just biding her time before picking up the pace.

The American coaches made some questionable choices for our relay lineups. On Saturday morning Natalie Coughlin outsplit Alison Schmitt in the heats of the 4 x 100 free relay. Yet head coach Teri McKeever put Schmitt in the evening lineup ahead of Coughlin, despite Coughlin's faster split and greater international experience and the fact that Schmitt had the 400 free the next day.

McKeever also happens to be Coughlin's coach in Berkeley, so it's possible that she opted for Schmitt because she didn't want to appear to be playing favorites. But she would have been justified in using Coughlin.

The opposite happened with the men. The two fastest splits this morning were from Jimmy Feigen, who led off in 48.4, and Matt Grevers, who split a 47.5. (Leadoff legs, done without the benefit of a flying start, are generally a little more than half a second slower.) But head coach Gregg Troy opted to replace all four swimmers from the morning. Nathan Adrian and Cullen Jones had earned their spots in the final by virtue of placing first and second at US Trials a month ago. But Troy also used Michael Phelps and Ryan Lochte.

Phelps swam well, splitting a 47.1, the fastest time of the relay. But Lochte anchored in 47.7, and was passed for the gold by the French anchor, who split a 46.7. Grevers had the 100 back final coming up the next day, so it's understandable that the coaches wanted to give him a little extra rest. But swimmers generally swim faster at night, and it's hard not to believe that either he or Feigen wouldn't have swum faster than Lochte did. Would the difference have made up the .4 margin by which the French beat the Americans? Probably not.

But it so happens that Troy is also Lochte's personal coach in Florida, so he appears to be playing favorites.

Speaking of the 6' 8" Grevers, here's his picture: 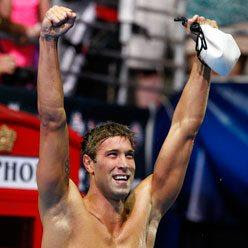 Here is the man who is his main competition tonight, the 6' 6" Camille Lacourt: 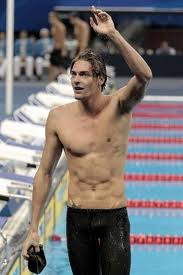 Hard not to look at the two of them and think, gee, well I know who'd win in a fight.
Posted by John Craig at 7:01 AM