Those doughty women of FEMEN have been at it again, this time protesting Heidi Klum's live TV show, Germany's Next Top Model.

Two topless protesters crashed the proceedings. One had "Heidi's Horror Picture Show" written across her torso. 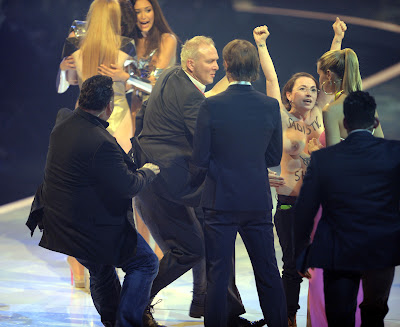 The next day, the group released the following statement on Facebook to explain their actions. Read it carefully:

FEMEN disrupted the live broadcast of Germany's most popular casting-show Germany's Next Top Model. The program format is pimp-show where world-famous supermodel Heidi Klum plays the role of "mom" and forms a bevy of underage girls to fashion-fools. The unauthorized appearance of FEMEN sekstremists at the epicenter of the show broadcasted live made the organizers and participants in the state of torpor. FEMEN sekstremists managed to make their accusations in the face of fashion-fascist ideologist of the show Heidi Klum in front of 15000th stadium and the millions of TV viewers audience. FEMEN regards the fashion industry as an element of pimp business and has consistently opposed the commercialization of the female body. Every year the fashion business millstones grind hundreds of thousands of girls, promoting the brilliance and richness of modeling career, forcing women to false ideals, provoking a real disease. Fooled by fashion propoganda, failed by fashion models, women regularly join the ranks of sex workers, and psychiatric patients. Stop the fashion business! Stop Prostitution! The true mission of a woman is a revolution!

"Forms a bevy of underage girls to fashion-fools"?

"The unauthorized appearance of FEMEN sekstremists....made the organizers and participants in the state of torpor"?

If you ever want an immediate clue as to the worthiness of a group's cause, take a close look at their missives. Too often they'll betray their level of intelligence with misspellings, inappropriately used words, incorrect grammar, and garbled syntax. The Facebook message above almost reads like one of those Google translations of a foreign language: you just have to guess at the original meaning from the jumble of seemingly disconnected words.

Perhaps I'm being unfair; perhaps the writer of the above manifesto only spoke English as her second, or third language. Even so, she seems guilty of confused thinking.

It turns out, as pointed out after this blog's last FEMEN post (by Pete and "W O D"), that FEMEN themselves hold auditions for the role of topless protester. Women who want the job have to be photographed topless in order to be hired (at a salary of $1000 a month) as a protester.

By holding such tryouts, aren't the group doing the exact same thing that they are protesting German's Next Top Model for? In fact, aren't they taking it a step further by insisting that their models pose topless?

On top of which, FEMEN obviously chooses its protesters on the basis of beauty, every bit as much as Heidi Klum's TV show does. If you don't believe that, then you must believe that these FEMEN protesters look like a typical cross section of feminists: 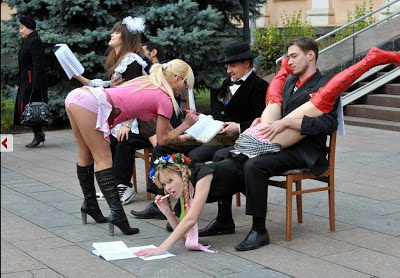 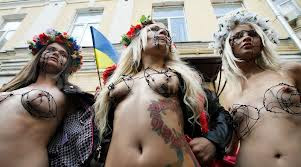 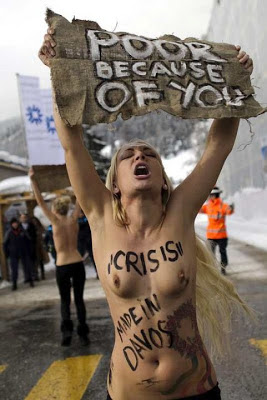 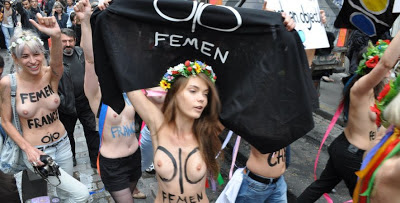 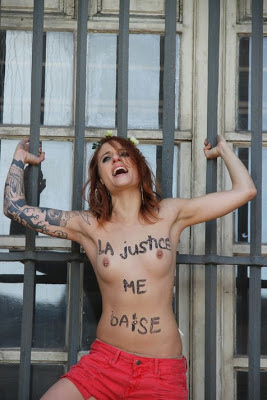 (I'll use any excuse to put pictures of half-naked women in my blog.)

Seriously, FEMEN's behavior is every bit as hypocritical as that of Norman Lear's (described in the post below).
Posted by John Craig at 11:22 AM

"The true mission of a woman is a revolution" - Isn't that mentality in part what got the West in such a mess?

By the way, I wish all feminists were as attractive as these women. But most of them are plain, frumpy and overweight. A good portion of them are just hideous!

This feminist group, as you pointed out, uses attractive and sexy females to 'sell' its message of exploiting women by using sexy and pretty women. They do so because even they know that if they were to use middle-aged, dumpy women to sell their message people would it revolting and their 'message' would be even less acceptable. The hypocrisy is staggering.

Feminists get angry because men have libido then turn around and try to exploit it.

Ambrose --
I was thrown by that line too, though in truth it wasn't much worse than the rest of what they said.

I'd be happy if all women -- of any political stripe -- looked like that. There does seem to be a correlation though. Have you ever seen one of those comparisons of prominent political women who are Democrats vs. prominent women who are conservative? The difference is almost as stark as the difference between Rachel Maddow and the Fox News women.

Yes, the hypocrisy is amazing.

Allan --
Soros is like one of those Hollywood villains who wants world domination.

There's a huge disparity between what's considered acceptable behavior from women and men. Women can get away with all sorts of things men are lambasted for. (See the recent post, "Feminists bent on proving women unequal" also "Who has the right to be creeped out?")

The chick with glasses, and "SADISTIC" painted on her chest, has a pierced nipple. Did Heidi Klum do that to her?? I had no idea she was so barbaric.

Anon --
My what sharp little eyes you have. I commend your powers of observation; I hadn't caught that.

I will be donating to the Femen movement.

I will even donate my services as an auditioner of those who will best promote the Femen cause!

Anyway ou have to laugh that the group has a pair of tits as their logo.

Down with patriachy! down with model contests!

I'm waiting for them to start protesting wet t-shirt contests next.