I realized soon after putting up yesterday's post that Bill Clinton's repertoire of poses was far broader than I had given him credit for. So, for your edification and enlightenment, here are a few more: 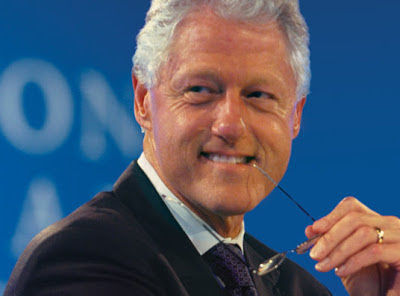 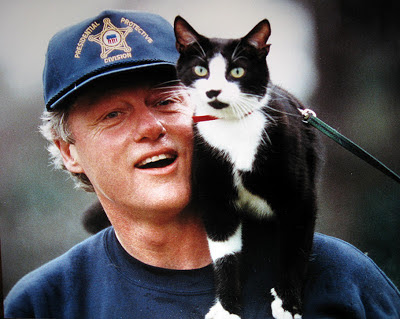 "Look what a nice guy I am -- I'm so affectionate I even let my cat climb on my shoulders." [This pose reminds me of nothing so much as those Death Row inmates who pose with pets in order to seem "nice."] 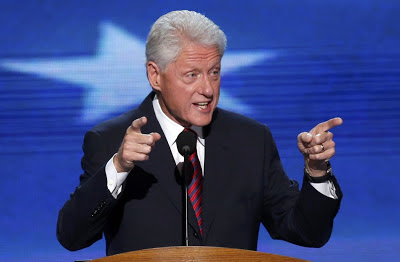 "I wouldn't be using both fingers to point if I didn't really, really mean this very serious point. And the fact that I'm making it, by the way, shows what a very serious person I am." 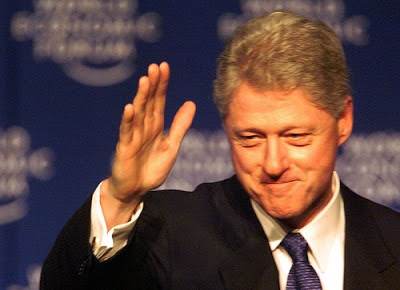 "Even though I'm God's gift to this country, I still retain my humility -- isn't that amazing?" 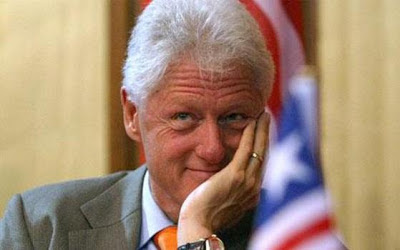 "I love being the center of attention, especially with a bunch of fawning sycophants like yourselves." 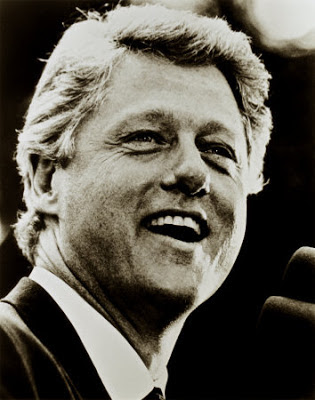 "I think I evoke JFK, don't you? Look, we have the same haircut." 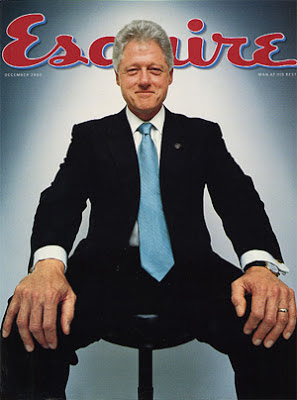 "Hey, you, what was your name again? Monica? Monica honey, come over here a sec, I got a favor to ask." 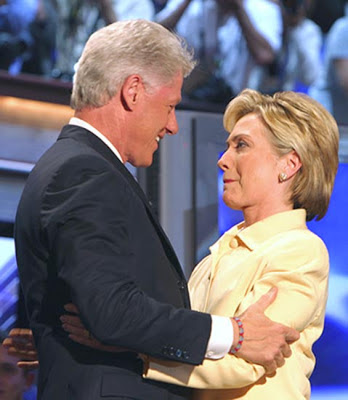 "Okay, so we happen to be on stage. Believe me, we're every bit this affectionate in private, too." 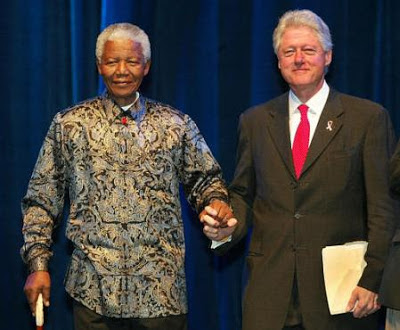 "I'm humbled to be in the presence of greatness.....my own, that is. Nelson should feel similarly honored."

Clinton is far more stage actor than movie actor: he is like a ham who is always emoting for the cheap seats. He looks good from a distance; up close, it's a bit much.

It's always the people who seem most sincere, especially those who can summon up such 'sincerity" at a moment's notice, for any occasion, who are the least so.
Posted by John Craig at 7:51 PM

These photos of Bill are quite enlightening - that is, if you know what to look for. In every one of them, Bill poses just right so as to convey an importance greater than he truly is. The simple-minded and those lacking discernment of human nature fail to see anything revealing in any of this - and that may explain why so many Americans got fooled by him.

People are easily fooled by charm and good looks. And if you couple that with a sociopath's personality, you'll likely fool most people.

One last point. Keep up the good work on these 'sociopath alerts,' John, because they're really insightful. Most people have never considered such things, and I don't know anyone else that's making this kind of information publicly available in ordinary language.

Phony indeed. How about a story of his recent behavior. Have you heard of "pump head" in relation to his surgeries?

One more thing John: Bill always likes to appear as if he's more intellectual and scholarly than he really is. He uses his reading glasses to give this appearance, and he'll often be seen with a book in his hand as if he's a voracious reader. He likes to be photographed as if he's deep in thought, intellectually solving the world's most complex social problems.

Bill is indeed an intelligent man, but not in a scholarly way. He's devious and conniving, no doubt. He can speak well too. However, instead of being a well-read scholar who displays a balanced knowledge of things, he uses the information he gains to support his opinions and manipulate others for his political causes. Bill probably reads books that already support his position, and he employs this to defeat his opponents. I doubt he reads and seriously ponders the arguments of his more intelligent detractors.

Most people never recognize this about him because rarely is Bill ever publicly questioned on a deeper level and intellectually challenged for the things he says.

Anon --
I hadn't, but just looked it up. if Clinton does have pump head (for those of you unfamiliar, it's cognitive damage occasioned by bypass surgery), at least he'll be a less effective sociopath at this point.

Ambrose --
Thank you very much. Sociopaths have been an obsession of mine ever since I got hoodwinked by one when I was 25. And you're right, most people have no clue. (I certainly didn't until I met and got to know that sociopathic woman at 25.)

Coincidentally, I saw a picture of him at the podium with reading glasses and was going to use that (I was struck by how much of a pose it looked like), but decided against it, figuring that at his age he actually need them to read his speech, so I was being unfair -- but I did have the same reaction you did.

I agree that there's a difference between real intelligence and insight and what the novelists used to refer to as a "low animal cunning." But I think Clinton actually has both. Sociopaths come in a full range of IQ's, and his is at the high end.

As far as reading viewpoints he already agrees with, I have to say that we're almost all guilty of that. (I know I am.) It's why I read your blog and not, for instance The Daily Kos. (Though in my own defense I also read the NYT.) I can't fault Clinton for that -- though I do fault him for virtually everything else.

Have you ever told the story of that sociopathic woman?