"I cry when a freakin' butterfly hits the windshield" 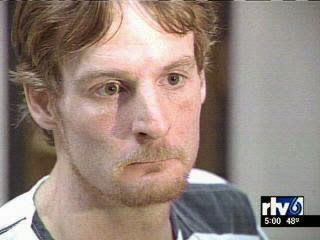 (Frederick Baer soon after his arrest)

Two days ago I wrote about a recent argument I'd had with a friend of Frederick Baer, the Death Row inmate in Prison Pen Pals VII. This friend of Baer's, who claimed to be a therapist, tried to make the case that Baer was not only not a sociopath, but honest, empathetic, and remorseful to boot. I argued that his sociopathy was unmistakable.

Today two separate people ("A" and "Gethin") sent links to the original post of a video of Baer, which showed him both right after he was caught and later on, in his cell on Death Row.

The video is quite revealing. In an interview right after he was arrested, when he was still insisting he was innocent, Baer vehemently claims, "I cry when a freakin' butterfly hits the windshield. That's how soft and sentimental I am! Why would I want to destroy life? I love life."

That kind of false emotionality is classic sociopathy. Sociopaths often give themselves away by unconvincingly claiming to be better than normal people. Sociopaths don't really have a good sense of what moves normal people, so they'll make ridiculous claims like that, thinking this will convince people of their innate goodness.

Most non-sociopaths don't cry when they hit a bunny rabbit, yet we were supposed to believe that this probable double murderer wept over insects?

The other thing I was struck by was how the clips of Baer right after he was caught showed a healthy and fit young man with no pockmarks on his face. So crystal meth had not made the kind of inroads it tends to on most addicts, meaning that Baer was probably not as deeply in its clutches as his friend seemed to suggest.

Baer's persuasive ability is probably best illustrated by the fact that before he killed the 24-year-old woman and her daughter, he was already a serial rapist, and his modus operandi was to ask women if he could use their phone. Most people are suspicious when a stranger comes to their door, yet Baer was somehow able to convince these women to let him into their houses.

Baer has sociopath written all over him. The fact that he was able to convince that therapist that he was honest, empathetic, and remorseful is just one more bit of proof.

If you haven't yet, check out the video.

(And, once again, note the thin lips which seem to characterize so many sociopathic Caucasian killers; I can think of no reason why this would be so, but I keep seeing it again and again.)
Posted by John Craig at 9:18 PM

If a "freakin' butterfly" ever hit my windshield, I wouldn't cry, I'd be grossed out. Sociopaths are unbelievable, annoying, irritating, immature, etc.

The other thing that struck me as very slightly off was the way he agreed that the deserved to die, but kept adding "according to the law". If he really thought that, would it be necessary to add references to the law more than once?

Gethin --
Good point. In other words, he doesn't really mean it.

His very lawyerly qualification reminds me of Bill Clinton parsing the definition of the words "sex" and "is." His posing with his cat (in the original Prison Pen Pals VII post) reminds me of the way Clinton posed with Socks, the White House cat. And his saying that he cries when a butterfly hits the windshield reminds me of Clinton saying "I feel your pain." His having been a serial rapist reminds me of how Clinton had to leave Oxford early because he was accused of rape. Baer was a methhead, Clinton reportedly had a coke habit when he was governor. The parallels are striking.

It sounds like he actually believes that empathetic people are so crippled by their own emotionality that they would fall to pieces over something that insignificant.

Pavonine --
Yes, that's a good insight. Sociopaths do tend to look at the rest of us as weaklings, burdened as we are by the normal set of emotions.

Its surprising what people will agree to when they are on the spot. You see that in youtube prank videos.

Its coincidental you wrote about sociopaths overstating or being unrealistic with their displays of compassion. I was going to ask your opinion on an article I read in the guardian.

"One hundred and ninety-three of your own countrymen and women killed.

How do you deal with this kind of pain, the kind you cannot describe? Waking up before sunrise and working until you can think no more is one way of coping. Incessantly worrying about the bodies of the deceased and that people will never be able to bury their loved ones. That the small things their loved ones could have remembered them by – a ring, a book, a toy – are gone. You cannot sleep, because you need to follow every story, read every article, stay informed about every detail, because that is the only thing you can do to inform others. This has been my experience this week."

Perhaps she is genuinely a very sensitive person but this seems over the top to me. If a close loved one dies, you probably will feel indescribable pain and struggle to cope. But for strangers in a plane crash who you have no connection to?

I hear news items like that and I don't feel anything. But if I read some individuals story, then maybe I'll feel something.

I know there are people with more empathy than me but still this seems too much somehow.

what do you think?

"Sociopaths do tend to look at the rest of us as weaklings, burdened as we are by the normal set of emotions."

That's why your recent article about why its not good to be a sociopath was so good. Totally disabuses anybody of that notion. And that's what we should say about it!

Steven --
Nice catch. Just finished reading the article, and I had basically the same reaction: Laura Klompenhouwer is overstating the Dutch reaction. In this particular case I wouldn't say it's an indication that she herself is a sociopath, as she isn't claiming that compassion for herself, she is attributing it to the Dutch people in general. (Sometimes writers lay it on thick because they need to write an article, and they think such a viewpoint will appeal to people.)

But your larger point is exactly right: it's ridiculous to think that every citizen in the Netherlands is grieving so intensely after the death of people whom the vast majority of them were not close to.

I'm like you (and most people) -- when I read about people dying (pretty much every day, in the papers), I feel nothing, or next to nothing. Sometimes an individual case may move me a little, but that's rare. Unless the person who dies is a loved one, we're programmed not to feel all that much.

Perhaps there are people who are more sensitive, and their hearts do bleed for strangers. But when I hear people claim that they are like that, my bullshit detectors tend to go off. And the people who claim ridiculous amounts of empathy and sympathy are generally sociopaths.

If you read that paragraph I quoted, she seems to me to be talking about herself.

"Waking up before sunrise and working until you can think no more is one way of coping. Incessantly worrying about the bodies of the deceased and that people will never be able to bury their loved ones."

Worrying about the people that wont be able to bury their loved ones means the person doing the worrying isn't a loved one. That makes me think also the sentences it follows from are about herself.

Also: "You cannot sleep, because you need to follow every story, read every article, stay informed about every detail, because that is the only thing you can do to inform others. This has been my experience this week".

The paragraph ends "this has been my experience this week".

Isn't it also a little strange to write a whole article that is defensive of Dutch people's grief?

I didn't think she was sociopathic by the way. I thought she was probably as sensitive person who is maybe a bit narcissistic or histrionic.

Steven --
Just re-read it, you're right, I hadn't focused on the "This has been my experience this week." I guess she IS talking about herself.

I think you're right, she's histrionic, not a sociopath. It's also true that females are more likely to react this strongly to other's grief.

And yes, those articles she referenced weren't really attacking the Dutch peoples' grief, they were more just sort of discussing the mood in the Netherlands and also talking about who the Dutch couldn't entirely ignore the economic consequences of their relationship with Russia. No defensiveness was called for.

btw yeah just to led support to your article, its definitely weird to say 'i cry when a butterfly hits the windshield'. wtf I'm sure you're right about this guy. Who murders a 4 year old then is sensitive enough to weep for a butterfly? I'm actually slightly offended he said it and that he expected anyone to believe it.


You been watching the com commonwealth swimming?

Steven --
Thank you, yes, what Baer said made no sense in light of his actions, and, frankly, wouldn't have made sense anyway.

Yes, I've been following the goings on in Glasgow quite closely. It's been a great meet so far, lots of fast times, some of them surprisingly so.