There has been a fair amount of publicity in the past couple days about how Brazil's loss to Germany in the World Cup has disheartened the entire nation. There have been numerous articles with embedded videos of Brazilians crying and carrying on as if a loved one had just died. The 7-1 loss is considered a national tragedy. 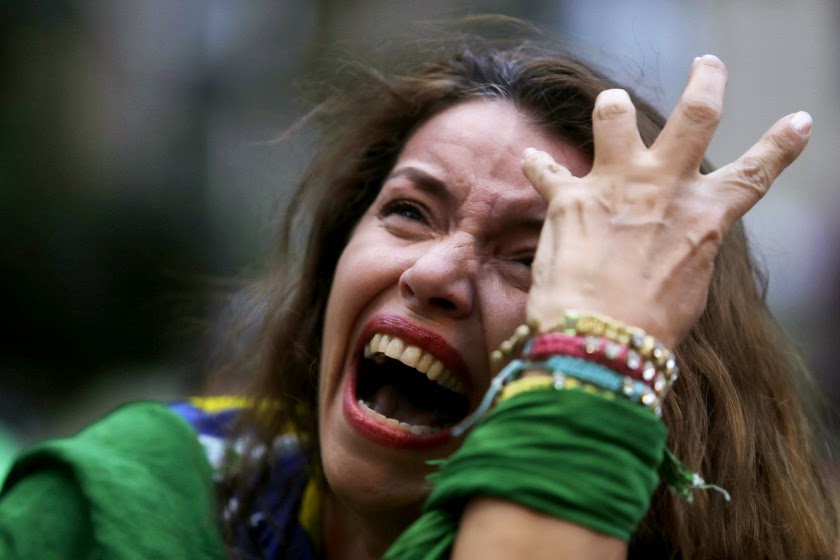 Someone should tell the Brazilians that soccer is just a game.

The Italians have a reputation for being a demonstrative, emotional people. The Brazilians make them look like inhibited robots.

I've known Brazilians, and I've liked almost all of them. Yes, it's a cliche, but they really do seem to be warm and friendly. But I know to avoid the subject of Brazil with them, at least in any honest way, since they all have this weirdly emotional nationalistic mindset.

I occasionally read the comments following articles on swimming websites. Whenever a Brazilian swimmer is a contender for a title, Brazilians write in to state that his victory is a foregone conclusion, or something to that effect. Worse, if anybody on the message board says anything that could possibly be interpreted as remotely critical of a Brazilian, the Brazilians react like scalded cats, and lash back. They seem to have huge amount of national pride combined with an equal helping of national insecurity. It's a volatile combination.

Every year Swimming World Magazine names the World Swimmers of the Year. In 2007, they decided to let the readers vote for their choice. That year Michael Phelps won seven gold medals at the World Championships in Melbourne, five of them in individual events, and set four individual world records. Later that year, Brazilian Thiago Pereira won six gold medals at the Pan Am Games, a second tier meet. Four of his golds came in individual events, and he didn't come close to any world records. (At Melbourne, Pereira's best finish was a solitary fourth place.) The Brazilians orchestrated a campaign to flood the Swimming World website with votes for Pereira, so he "won" the popular vote for Swimmer of the Year. (What did the Brazilians think they were proving?)

Swimming World discontinued popular votes for Swimmer of the Year after that.

Cesar Cielo, the great Brazilian sprinter who holds the world records for the 50 and 100 meter freestyles, bursts out crying after every major victory. He does this without fail. Others find it a little embarrassing, but in Brazil this is probably considered normal behavior.

Think of the most diehard sports fan you know, the one who lives and dies with his team's fortunes. Let's say he's a Boston Red Sox fan. He's not a bad guy; he's just a little insane when it comes to the Red Sox. He wears sweatshirts with Red Sox logos, Red Sox baseball caps, and his room is festooned with team pennants. You sometimes wonder about his sanity, and every now and then you get the urge to ask him why he cares about the Red Sox so much, since he has no personal relationship with any of the players. But you refrain, because you don't want to provoke an emotional outburst.

Now, imagine an entire country composed of people like that.

Renzo Gracie, the great Brazilian mixed martial artist, was in the news a few weeks ago, for having been involved in a brawl outside a nightclub in Manhattan. It turned out that he and some of his friends had gone there to rough up the doormen because a few nights before the doormen hadn't let Gracie's cousin past the velvet rope. There's something quintessentially Brazilian about such an overreaction to a minor insult.

Don't ever try to tell the girl from Ipanema that her country does not have the best cuisine, the best-looking people, the greatest athletes, and the most beautiful scenery in the entire world. Not if you don't want to start a fight.

There's been some recent talk that because preparations are behind schedule, the 2016 Olympics may be taken from Rio de Janeiro. Evidently the IOC has already made some discreet inquiries to other cities about possibly substituting at the last minute.

My advice: let Rio have the Games. Even if the venues are unfinished, even if some of the events have to be canceled, even if the track measures 399 meters and the pool 49 meters, do not move the Games. The national crisis of confidence that would erupt would be just too terrible to contemplate.
Posted by John Craig at 4:48 AM

I didn't know this about Brazilians, not knowing much about the country and its' people, period. Interesting.

Birdie --
I've only realized it in the past few years. The NY Times had an article in their sports section today about the Brazilians' reaction to their loss. I'm going to do a short post about it later today.

Sports have long been considered a proxy to war, where nations (or cities) can do battle without actually killing anyone. This is always in my mind during things like the World Cup; so I take some perverse delight when I see women and children weeping in the stadium, as their team is being vanquished, thinking some small part of them "knows" the victors will soon storm past the soccer field, and into homes across the countryside, raping young mothers and stealing their ipods. Thousands of miles away through my TV screen, I can practically taste their sweet, salty tears, mixed with a trickle of national colors face paint.

The picture that comes with this post is not a flattering one - the woman has a lot of teeth, discolored ones at that.

I'm still waiting to see what your thoughts are in regards to our current mass migration on the southern border. The MSM is truly not giving it much justice. Only when you search local papers online doe the scope of this problem show its full implications.
-Arthur

Anon --
Yes, sports are just ritualized combat. And I, too, feel some schadenfreude/perverse delight when the opponent is bested. The Brazilians, though, react as if it's real combat, with the results you describe.

Birdie --
I actually thought she was sort of pretty, or at least would be if her face weren't contorted so. I just used that shot because of the extremity of the emotions she was showing.

Arthur --
Long time no hear from….

I try to restrict myself to only writing when I have something original to say, and as far as the border crisis goes, I just agree with what the Republicans are saying: Obama caused it with his statements about DREAMERs, he's doing nothing substantive to stop it (the 3.7 billion he asked for to "deal with it" is basically just more money to help process and care for the illegal immigrants.

What we should do is just seal off the border as best we can, and send all the illegal immigrants back. (See? I basically just agree with the conservatives.)

I have written about immigration in general in the past on this blog. I think we should only accept immigrants if they either have 500k to invest in a business here, or test at 115 or higher on an IQ test. The birthright law (dropping a kid in the US makes automatically makes that kid a citizen) is pure insanity.

We should follow Israel's lead as far as our border (erect a big fence, and immediately send any border crossers back) and Mexico's lead on immigration in general (they only accept people they think will help their country somehow, and anybody caught there illegally a second time is given up to ten years in jail).

and yes, Mexico's hypocrisy on this issue is amazing: at the same time they are so stingy with immigrants, they lecture us for not being more welcoming to all of the illegal immigrants who stream across our southern border.

Recovering from back surgery at this time. I agree with your assessment of the situation. The statements parroted about "we're all immigrates" and how "everyone is just looking for a better life" are stale and preposterous. One only has spend alittle time in California where I live to see how well that is working out. We have enough people here already selling flowers and the lines in the social service offices are long enough thank you very much. Watching the national suicide of this country is pathetic. The only thing more disturbing is how quick people are to call you racist if you happen to notice what is going on. Call me a racist or not, the outcome for this country will remain the same.

BTW, someone ran the figures and that 3.7 Billion the president is asking for equates out to about 60,000 per illegal in this situation. No money for veterans, no money for infrastructure but we're trying to spend it on this?

Arthur --
Hope your back feels better soon….Yes, couldn't agree with you more, the whole situation is sickening. our country is already deeply in debt and now we have to go even further into debt to provide aid to non-US citizens. And the way these things work, basically, the more Mexicans we take in, the more our country will be like Mexico. Is that what we want? The recent PISA scores showed that every single racial and ethnic group in this country performed right in line with people from their country of ethnic origin. Genetics do tend to express themselves, very clearly, even though we're not supposed to notice, as you say.

As you say, we're committing suicide, and quick. All the Dems care about is more future Democratic voters, and all the Republicans are too cowed to speak honestly about the effects of ethnicity.

The picture that you chose (for this post) is appropriate, showing the Brazilian lady's emotions very well (as she reacted to her country's loss at a game).

Birdie --
Just put up that other post I mentioned to you earlier.

I had to come back to this article.

A Brazilian surfer is about to become a World Champion.A lot of surfers don't think he is worthy of being world champion because his 'style' is a bit off. The reaction by the Brazilians is ridiculous on surfing forums (You would think they personally were being crowned World Champion, and any insult to his surfing appears to be taken personally)

My interactions with Brazilians 'on land' has been that they seem to stick to themselves, don't cause any issues, you never see them drunk or causing trouble.

In contrast, in the surf they have an atrocious reputations!

Andrew --
That reaction on the forums certainly fits.

I don't follow surfing myself; are you a surfer?

I do Surf, and have done since I was young.

Great for the fitness (you spend most of you time paddling and fighting currents) in that you have so much fun or so scared by some conditions you don't feel the pain, I only get out when I start cramping.

Surfing is good for swimming I find.

Andrew --
Are you a swimmer? Is that how you stumbled across this blog? What country do you live in?

I found your site by searching "Is Lance Armstrong a Sociopath". My Dad has been calling him "the Robot" since the 90's so he picked up on him pretty early on.

I live on the West Coast of Australia and used to swim in the ocean a lot however shark attacks recently have put me off! I don't like chlorine pools.

I don't blame you for avoiding the sharks, I'm a lifelong swimmer myself but am scared of the ocean.